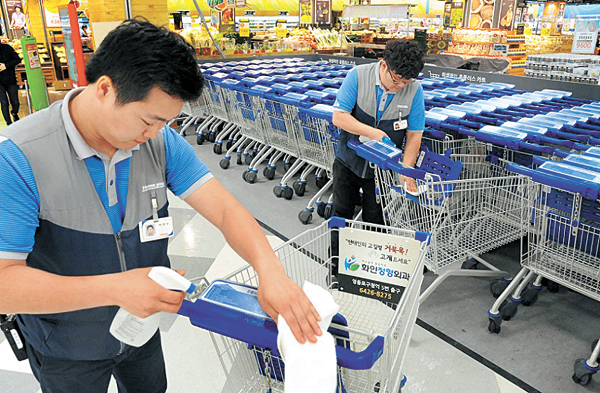 Employees wipe handles of shopping carts Thursday at the Homeplus branch at Yeongdeungpo, southwestern Seoul. Various businesses have been affected by the Middle East respiratory syndrome (MERS) outbreak. Provided by the company

Since the first Korean case of Middle East respiratory syndrome (MERS) was confirmed three weeks ago, the number of people with the highly infectious disease stood at 36 with three confirmed deaths as of Thursday.

Fear of the disease is spreading rapidly among the general public, resulting in rising sales of hand sanitizer and surgical masks. The disease also is affecting the stock market as shares of travel agencies and cosmetic companies plummet.

Sales of masks, hand sanitizer and petroleum jelly have jumped sharply since the MERS outbreak, according to data compiled by convenience store operators.

On Thursday, 7-Eleven said sales of masks jumped 710.6 percent and hand sanitizer 488.9 percent from May 28 through Thursday, compared with the previous week. 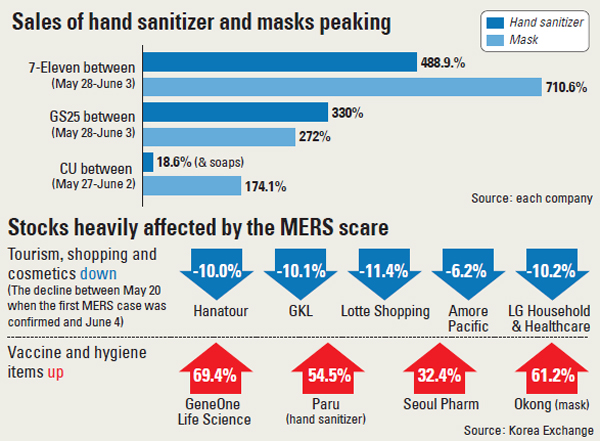 Sales of packaged wipes were up 14.5 percent and mouthwash 17.3 percent.

CU, a convenience store operated by BGF Retail, saw a 174.1 surge in mask sales from May 27 through Tuesday.

“Sales of masks were particularly strong as people are becoming more concerned about airborne infections,” said a CU official.

The biggest-selling item related to the MERS outbreak at 7-Eleven was the KF94 mask, CDC-certified protection against airborne dust and germs. Its sales skyrocketed nearly 2,400 percent.

Data from 7-Eleven showed that stores near subway entrances saw particularly sharp gains in sales of protective and sanitary products. Their sales of masks jumped 769.6 percent and hand sanitizer 808.5 percent.

Sharp gains also were seen in sales of precooked meals, as more Koreans opt to eat in rather than dine out.

Sales of packaged and precooked meals rose 26.1 percent at CU.

At 7-Eleven stores near neighborhoods with a high concentration of single-person households, sales of precooked meals were up 95.4 percent and home meal replacements 84.6 percent.

Sales of Vaseline, a petroleum jelly brand, at 7-Eleven increased 121 percent after messages spread on the Internet that rubbing it in the nostrils would help prevent viruses from advancing into nasal cavities.

Hana Tour stock closed 10 percent lower on Thursday than it did May 20. Grand Korea Leisure, which operates a foreigner-only casino in Seoul, dropped 10.1 percent. Shares of Lotte Shopping, owner of Lotte Department Stores that are popular with Chinese and Japanese tourists, plunged 11.4 percent.

AmorePacific, a cosmetics brand highly popular with Chinese tourists, declined 6.2 percent, and LG Household and Healthcare was off 10.2 percent.

GeneOne Life Science, a biotech company in Seoul, jumped 69.4 percent from May 20 through Thursday, after the company announced it has been working on a MERS vaccine since 2012.

However, after the government repeatedly emphasized there is no vaccine yet, GeneOne Life Science stock prices started to decline and closed at 16,500 won on Thursday.

Seoul Pharma shares were up 32.4 percent since May 20.

The stock of companies producing personal hygiene items also rallied. Paru, a producer of solar panels and hand sanitizer listed on the Kosdaq, surged 54.5 percent since May 20.

Analysts advise investors to be cautious.

“It would be better for investors to be conservative in buying some biopharmaceutical companies’ stock, which doubled or even tripled recently, as the aftermath from the spread of MERS would be temporary,” said Ko Seung-hee, an analyst at Daewoo Securities.”