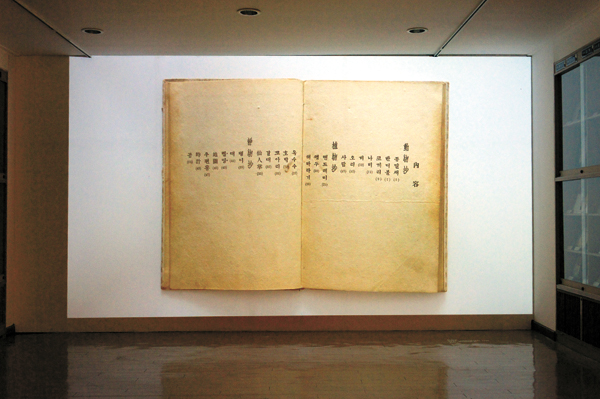 The Museum of Korean Literature, founded by Paradise Group, hosted the special exhibition “House of Poetry” last year, which displayed a slide show of Korean poems written from the 1920s to the 1960s. Provided by the museum

For Paradise Group, a local resort and casino operator, how to provide the right entertainment for people seeking a break is key.

But that is not all the company is about. The group, founded in 1972, has also established a cultural foundation and a literary museum to provide education to locals, especially youngsters.

“The company believes the combination of arts and science will contribute to creating a happy future for Korea,” said Choi Seong-wook, senior executive director of the communications department at Paradise. “So it strives to give a helping hand in preserving cultural heritage, especially the literary works that contain the Korean spirit, alongside providing support to local artists so that they can continue focusing on creative work.”

The company set an agenda to give back to the community early on by establishing the Paradise Culture Foundation in 1989. Later, it wanted to focus on preserving Korea’s literary canon and educating youngsters on the country’s modern publications, so it opened the Museum of Korean Literature in 1997.

Now, it plans to apply some of its know-how to its new resort, set to open on Yeongjong Island in Incheon in 2017.

“We aim to show that not just pop culture, but also more traditional craftwork can speak to the wider public,” said Choi.

The group has invested in preserving literary work and handing it down to the next generation, in part because of writer Jun Suk-hee, who is the older sister of the company’s former chairman. She helped Paradise establish its social contribution towards Korea’s modern literature and was a key instigator in the opening of the literary museum.

The institution houses collections of literary works by early-1900s writers, as well as photos. However, in order for visitors to get the most out of it, rather than just skimming what is displayed on its shelves, the company decided to work with the Ministry of Culture, Sports and Tourism to provide more insight into how to appreciate Korean literature. 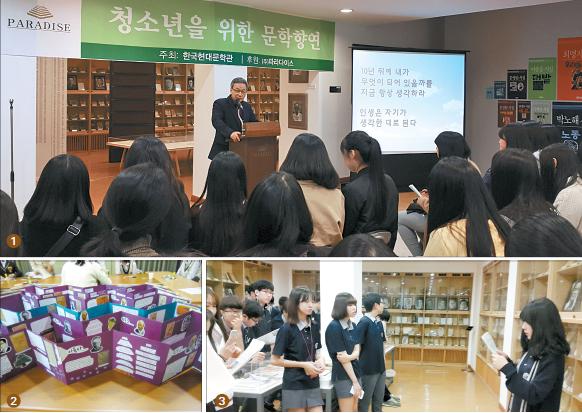 1. Poet Jung Ho-seung gives a lecture to local students at the Museum of Korean Literature. 2. Pamphlets introducing Korea’s major writers are shown last month at the museum. They were made by middle school students 3. A high school student gets to work as a daily literary curator at the museum, sharing the knowledge she has about Korea’s modern-day literature.

The program, titled “Humanities on the Road,” started last month and will last until October. It provides guided tours to middle and high school students that sign up in advance. It is free of charge.

As well as learning about the museum’s collection while on the tour, the students are provided with an opportunity to become a literary curator for the day. They study in advance what they want to share with their fellow students and then stand in front of the group to explain what they learned from Korean literature and how they choose to interpret a given text.

The museum also provides an art program where participants can make and decorate their own books. The students can either write their own stories inside the embellished covers or can simply write down any memorable poems or parts of novels they have read.

“We try to provide diverse educational programs through which the students can picture themselves being part of encouraging literary culture in the future generations,” said Seo Young-ran chief curator of the museum.

The museum is also working on digitalizing the works of Korean writers. Since this year celebrates the 70th anniversary of Korea’s liberation from Japanese colonial rule (1910-45), the museum decided to focus on writers who went, or were taken, to North Korea.

For each writer, the museum has created a DVD introducing a brief summary of their life and an e-book including their major pieces. The completed DVDs are usually distributed to local literary museums, colleges, public libraries and teachers at schools. The museum is currently aiming to produce 1,500 DVDs this year by the end of November.

The museum also encourages people to write in less popular formats, such as essays, rather than novels and poems. It established a literary award for essayists in 2011 to honor the founder of the museum, who wrote in this genre. Professor Kang Shin-joo of Yonsei University and literary critic Jeong Yeo-wool have been recipients of the prize.

“It’s an honor for us that those who received our award have now become more widely known in the literary field,” said curator Seo. 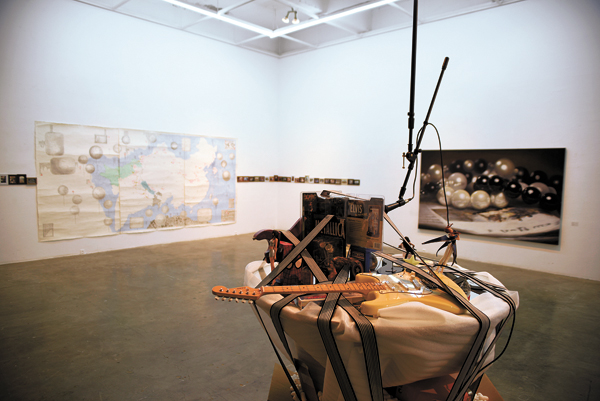 This year’s prizes will be given out in September. Poet Jo Eun, the winner last year, will review the submitted works for this year’s edition. The winner receives 20 million won ($17,879).


Performances for the public

The company has financially supported aspiring artists since 1997, sending two to its art residency near New York every year as part of its Art/Omi project.

Now, the group is planning to make its own gallery to display the work of the local artists it sponsors. It will allot a space at its new Paradise City resort being built on Yeongjong Island.

“We have the Art/Omi program which we have run for almost 20 years,” said Jun Dog-whi, the senior manager of the Paradise Culture Foundation. “We have accumulated some good art pieces throughout the process, so we will use our new resort to actively show what we have so far, while we keep it open for new pieces from other local artists who want to show their work to the public.”

Prior to the opening of its new gallery space in Incheon, the company is remodeling a small house near its headquarters in Jangchung-dong, central Seoul.

However, the gallery will not be open to the public until the second half of this year. As a result, the company has not yet announced a specific plan about what artists will decorate the walls of the temporary space.


“To signal our attempt to move on to the next level to support local artists, we had an exhibition with all the artists we have worked with in the past in April, as a way to review what we had done in the past and to think more about what direction we need to take for the coming years,” said Jun.

The group does not neglect musicians either. Each year it recruits either groups or individuals who request the use of its infrastructure and resources.

Any interested parties can submit their proposal and the group reviews whether to provide monetary help.

The group’s aid to theater experts has been sporadic, so it decided to start a new program this year. One of the tentative plans it has involves making a so-called art truck, which will bring concerts to many people in the metropolitan area.

“It seems like people in the city are, ironically, more isolated from gaining some cultural experiences, as many companies now focus on bringing such opportunities out to the countryside,” said Jun.

“So we wanted people who have a busy life to find a way to enjoy respite with music playing right near them.”

The program is still being designed by the group. It will start operating as early as August this year.