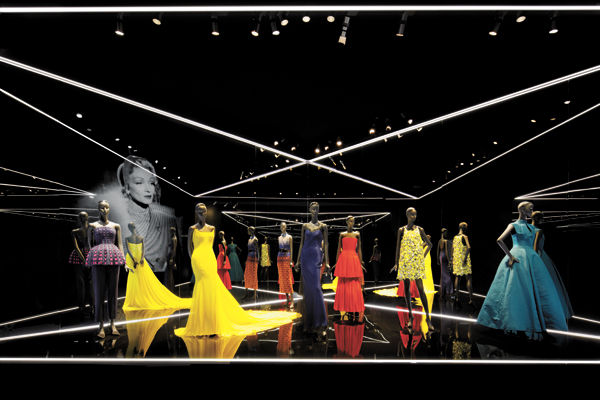 Christian Dior’s “Esprit Dior” exhibition is being held at the Dongdaemun Design Plaza in central Seoul. Above is the “Stars in Dior” section, featuring evening gowns worn by celebrities and famous personalities since the beginning of Dior to the present day. The bright yellow dress, second from left, was worn by Charlize Theron at the Cannes Film Festival just last month. Provided by Christian Dior

The door to Christian Dior’s townhouse at 30 Avenue Montaigne in Paris has been opened in the heart of Seoul.

The French fashion house’s “Esprit Dior” exhibition at Dongdaemun Design Plaza (DDP) invites visitors to begin by walking through the legendary designer’s home, which has been recreated in fabric by Korean artist Do Ho Suh.

“Using his fabric-based architectural work, the artist has recreated this incredible piece that expresses the iconic idea of Dior and how the whole story started in 1947,” said Florence Muller, fashion historian and the exhibition’s curator. “Seo wanted to work on the idea of transparency, and with the transparency of the textile, you have the impression that you will enter through the walls inside the secrecies of the house.”

Five other Korean artists collaborated with the brand on other parts of the exhibition.

“Visitors will be able to discover very important Korean artists as they discover the exhibition, and it is to say that ‘Esprit Dior’ is really trying to link art, culture, history, the art of living and everything that helped to build and create fashion and haute couture,” said Muller. 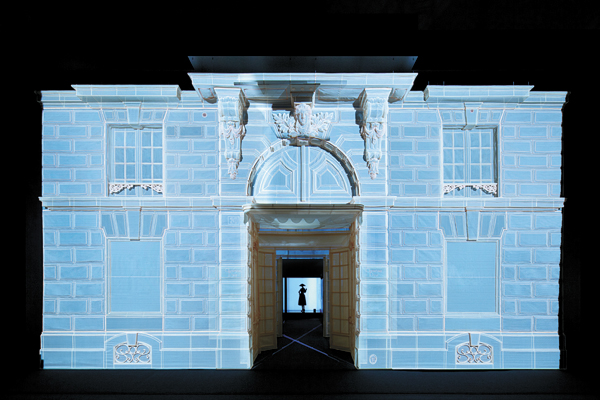 Though the house has more than enough memorabilia to fill an exhibition on its own, Muller said the incorporation of Korean artists was an opportunity to build bridges between Seoul and Paris.

“I think Korean artists and art have become very important around the world,” said Muller. “It’s a way of creating an encounter with Korean culture and a way of building waves from France through Korea and to create a dialogue. It’s also a way to express the fact that Korea is a country of culture with a history of luxury, elegance and sophistication.”

The artists were chosen not only because they are world renowned, but also because of the “natural link the the artists have that can’t be forced,” explained Muller.

“All the artists are very sophisticated and it’s similar to the process of creating haute couture,” she said. “... They have natural links with the Dior world.”

Taking Seo’s installation for example, Muller explained that “such huge architectural work using fabric, organza and metal elements and gradually piecing them together… then hung and ironed, the whole technique is reminiscent of the technique used in haute couture.”

Artist Kiwon Park’s work is displayed in the “From Pink to Red” section where he made miniature pink and red Dior gowns that are reduced-scale replicas of the original designs, which require the “same rigour and attention to detail as their full-scale counterparts,” Muller said.

The walls of this section gradually shift from pink to red using hanji, a Korean traditional paper, also created by Park.

The exhibition is divided into 10 themes, each vividly showing the spirit of Dior, from how it started to where it is today, as well as its philosophy and inspirations. 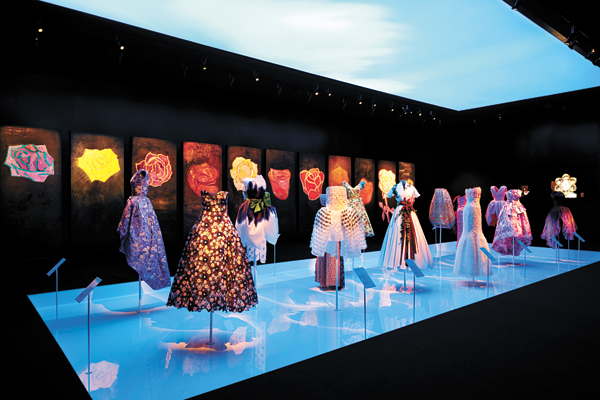 In the “Dior Garden” section, Korean artist Heryun Kim’s 12 paintings of roses are on display alongside Dior’s rose inspired dresses, as it is an “emblematic” flower to Dior. Provided by Christian Dior

In the “Dior Garden” section, 12 paintings of roses by Korean artist Heryun Kim are displayed alongside colorful rose-inspired dresses, as the “rose is an emblematic flower of Dior and Mr. Dior’s favorite flower,” Muller said.

His love of nature, according to Muller, translated into Dior’s perfumes, which he once called “the finishing touch to any dress.” More about Dior’s perfume can be found in the “Miss Dior” section where Korean artist Lee Bul’s installation is also on display. 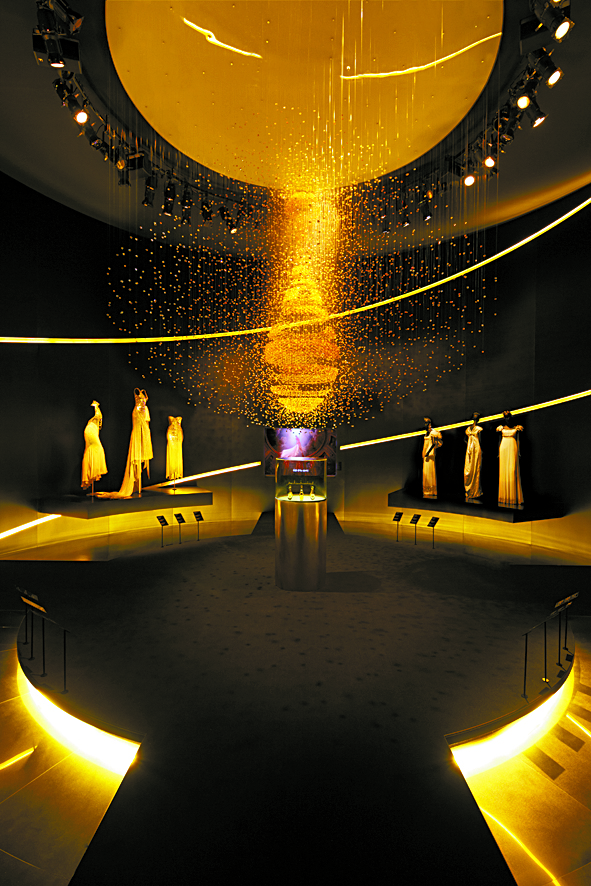 Korean artist Seon Ghi Bahk’s crystal installation of the J’adore perfume bottle is on display in the “J’adore” section.Provided by Christian Dior

In “The Dior Allure” section, visitors can see how Dior’s silhouettes have changed from 1947 to 2015. A selection of dresses is displayed in chronological order, allowing viewers to see the ways in which the house has both shaped and been influenced by global fashion trends.

The exhibition offers much to admire about Dior’s designs and history, but Muller emphasizes that the focus should be on the dialogue between the fashion house and Korean culture.

“Korea has become a very important country around the world,” said Muller. “This country is very well known for its music, design, graphics and fashion. This is truly the moment to encounter and have a dialogue with Korea.”

The exhibition, which kicked off June 20, will run through August 25 at the DDP in central Seoul. It opens from 10 a.m. to 6 p.m. Last entry is at 5:30 p.m. Admission is free. Guided tours are available twice a day at 2 p.m. and 4 p.m. and tours can be booked at espritdior.com.