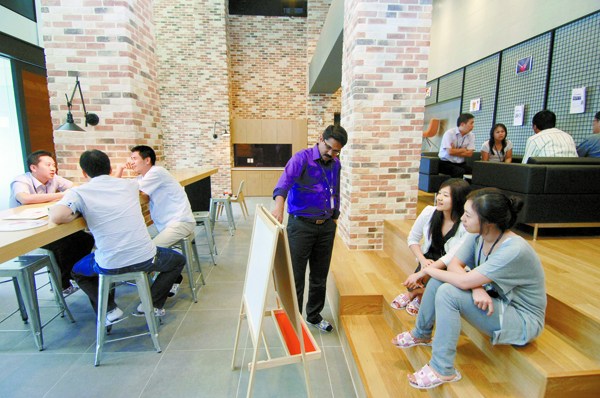 Workers discuss their ideas at the headquarters of LG Electronics in Yeouido, western Seoul. Provided by the company

Kang Dong-ho, a researcher at LG Electronics, thought it would be great if he could print out photos from his smartphone instantly.

At the time, LG Electronics had launched an initiative to seek fresh ideas from workers by holding regular contests.

The 34-year-old decided to submit his idea to the contest in 2010, although he had been with the company only less than a year at the time.

This is how the Pocket Photo portable printer was born. Today, the product is available in more than 40 countries, including China, the United Kingdom and Germany. 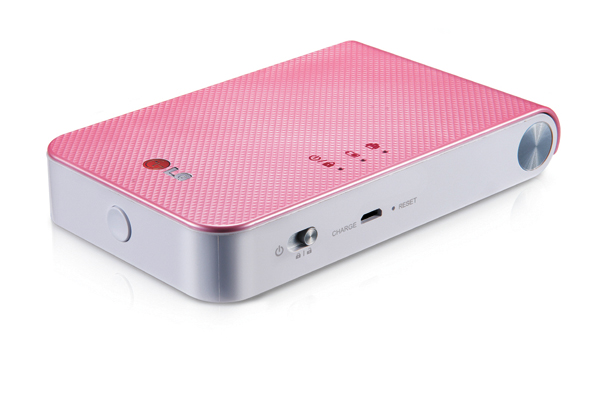 Pocket Photo, a portable photo printer, is based on an idea by an LG worker

The company rewarded him with a promotion and bonus amounting to 40 million won ($35,800).

This tale symbolizes how LG Electronics wants to forge a corporate culture that is conducive to driving extraordinary innovation.

When CEO Koo Bon-joon took the helm at LG in 2010, he advocated a strong corporate culture. His focus was on research and development and increasing production efficiency.

But as LG looks for new growth engines in the fast-changing tech industry, Koo now stresses the importance of creativity and engagement of workers on a variety of levels.

LG Electronics attempts to achieve the goal through a number of different idea contests.

Among them is an annual contest held by a handset division in which participants are encouraged to submit prototypes along with written summaries.

A large part of LG’s latest flagship G4 is attributed to input from this open contest.

For the first time, the G4 offers an “audio-sharing” feature where multiple users can listen simultaneously to audio files or Digital Media Broadcasting using Bluetooth technology.

The premise came from a winning idea in the annual contest.

Another innovation on the G4 is interchangeable covers - either leather or ceramic. The leather comes in six colors. This is also partly based on an employee’s suggestion from the contest that the G4 offer a variety of colors to suit different tastes. Initially, LG planned to offer only black and brown.

Since it started in 2013, the contest has generated more than 1,500 ideas from employees and 90 of them were developed into prototypes. Twenty-five have resulted in patents.

Along with the regular contests, employees can make suggestions anytime through an internal online network.

Their input was largely accepted and resulted in one of the notable features of the company’s flagship smartphone.

The camera offers some manual controls reserved for professional-grade DSLR cameras as a user can control shutter speed, white balance and ISO, making the G4 the first smartphone to provide such functions.

“Many workers are genuinely interested in how tech devices work and how they can improve existing features,” said a representative of LG Electronics. “We believe employees have great potential for contributing to making better devices and machines.

“This is why we open different channels and platforms so we can attend to what they think.”

To create a more transparent environment for production, LG also began to engage outside designers through its Design Committee starting in October 2014.

In May, Koo visited LG’s research center at Gasan Digital Complex, western Seoul, primarily to see designs of products under development. LG Electronics announced that day it would extend the role of the design panel.

“The panel will be engaged from the very beginning phase of production development,” the company said. “LG will also pay attention to the design of packaging as well as products themselves.”

It also formed an alliance with color lab Pantone of the United States to better utilize colors when developing LG products.

LG said it will expand the partnership with the lab to research long-term effects that each color has on people so they can refer to the results when choosing colors on different devices and machines.

LG’s efforts appear to be paying off as it has been recognized with prominent design awards.

LG Electronics scooped up a total of nine Red Dot Awards in the Communication Design category in 2014.

The flagship G3’s keyboard system and user interface received Best of the Best awards, while a web operating system running on LG’s smart TVs was recognized by Red Dot judges for its intuitive user interface.

Affected by Confucian tenets that promote reverence for seniors, many of Korea’s big companies are characterized by rigid corporate cultures where younger employees are often pressured to remain silent in deference to senior colleagues.

But some analysts say such an environment can disengage workers and give the impression that companies are interested only in marginalizing younger employees.

The company requires new team leaders to hold an “open communication” session within three months of appointment. There, members of the division are encouraged to make suggestions about how they hope the new head will lead the team.

In 2010, the electronics company introduced a one-to-one communication channel to allow younger workers to have a conversation with team leaders at a deeper level.

The CEO regularly stresses the importance of communication not only between team workers, but between divisions.

“Efficient communication is the key to getting work done promptly and utilizing workers’ full potential,” he said in 2014.

But such initiatives sound hollow if workers don’t feel tangible improvement. So LG introduced the LG Way Survey in an attempt to assess the effectiveness of initiatives.

In the survey, employees are asked whether they have the opportunity to operate autonomously and are satisfied with their boss’s leadership style.