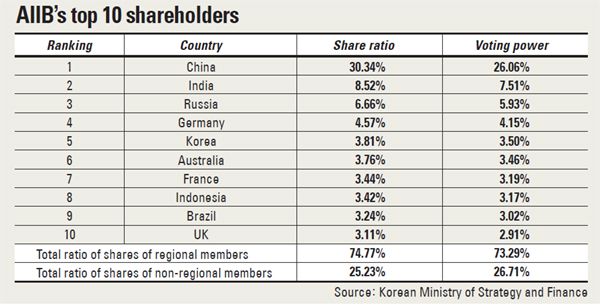 Seoul became a founding member of the China-led Asian Infrastructure Investment Bank (AIIB), along with 56 other countries Monday.

Korea received a 3.81 percent stake in the new institution, which is expected to challenge U.S.-led financial institutions like the World Bank, ranking fifth among the members and following China, India, Russia and Germany.

The articles of agreement were signed by representatives of 37 Asian and 20 nonregional member countries at the Great Hall of the People in Beijing.

Korea’s founding member shares will cost it $3.74 billion. Korea will pay $750 million when the bank launches and pay the remainder in installments over the next five years.

Beijing has the largest stake in the bank with 30.34 percent. This is much bigger than the second-largest shareholder, India, which has 8.52 percent. Russia will own 6.66 percent.

After going through the legal procedures of each country, the bank is expected to be officially launched at the end of this year or early next year. Its initial authorized capital is currently $100 billion.

The voting power for each country has been calculated based on their share ratio and so-called “basic votes,” which each member country receives equally.

China has effective veto power over major issues - but not all issues - as its voting power is 26.06 percent. Under the rules of the bank, decisions on several major issues such as the size of the bank’s board requires more than a three-quarter majority of members.

“China has veto power at the moment over ‘super majority’ issues, which require more than three-quarters of votes,” said Choe Hee-nam, Korean deputy finance minister of international affairs, at a press meeting. “But the AIIB is planning to accept other countries, so if some big countries come in, the share ratios of the current members will be lowered. In that case, China’s voting power could fall below 25 percent.”

The governance structure will be similar to other international financial institutions. The bank will have a board of governors, a board of directors, one president and one or more vice presidents, according to the bank’s official website.

The board will have 12 directors, nine from regional members and three from nonregional, with two-year terms. Serving consecutive terms will be allowed.

Choe said Korean officials are trying to persuade Beijing to appoint a Korean as a vice president. Seoul officials say competition over those positions is tough among members.

It will be difficult for Seoul to get a director on the board with its small share ratio, Finance Minister Choi Kyung-hwan told Korean correspondents in Beijing on Sunday. But Korea is trying.