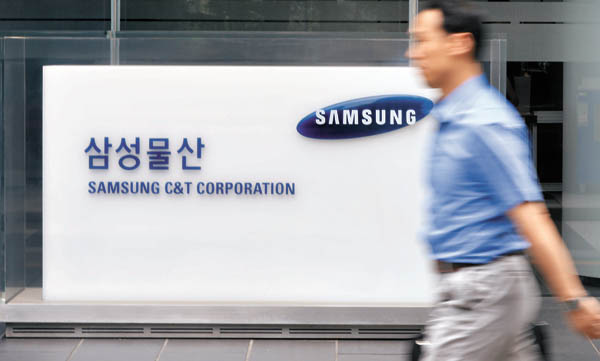 The tie-up between Samsung C&T and Cheil Industries will bring significant changes to the overall structure of Samsung Group as well as to the businesses of the two Samsung affiliates.

Analysts see the merger as Samsung’s latest efforts to tighten the owning family’s grip over the country’s largest group as a generational leadership shift is under way, from ailing Chairman Lee Kun-hee to his only son Jay Y. Lee, vice chairman of Samsung Electronics.

As Cheil, the group’s de facto holding company with the younger Lee the largest shareholder, takes over Samsung C&T, so Lee junior is now entitled to the lucrative holdings of C&T that include a 4-percent share of Samsung Electronics. Without the merger, Lee would hold just over half a percent of the electronics company, Samsung’s crown jewel.

The combined unit that will use Samsung C&T as its corporate name can also help centralize Samsung’s complex web of cross-shareholdings around the major affiliates Samsung Life Insurance and Samsung Electronics, making the ownership structure more linear than before.

Currently Cheil Industries owns 19 percent of Samsung Life Insurance and Samsung C&T owns a 4 percent stake in the electronics arm. Once the merger is completed the new company will own both holdings.

After the merger, the younger Lee’s share in Cheil will be reduced to 16.5 percent from the current 23 percent, but he will still be the largest shareholder of the new company.

The two daughters of Chairman Lee are also expected to be influential in the new Samsung C&T, with each having a 5.5-percent share in the new unit.

Lee Boo-jin, CEO of Hotel Shilla, has doubled as a senior vice president of Everland, Samsung’s resort unit, which is now part of Cheil Industries.

She also serves as an advisor to Samsung C&T. Lee Seo-hyun, the younger daughter, is the president of the fashion businesses of Cheil Industries.

A regulatory filing said the merger would result in synergies, but analysts say the move is primarily aimed at helping the son extend his influence over the group by merging the construction affiliate with Cheil. That opinion is widely shared by ordinary Koreans as well.

The merger is the latest sign that the younger Lee is gaining more power as the patriarch remains hospitalized after suffering a heart attack last May.

Samsung Group announced in May that Jay Y. Lee will serve as chief director of the Samsung Foundation of Culture and Samsung Life Public Welfare Foundation, replacing his father.

The group has also conducted a string of initial public offerings of its affiliates, including Samsung SDS and Samsung Everland.

Along with the IPOs, the company sold businesses that it deemed not profitable. In April, Samsung sold stakes in four chemical and defense firms, including Samsung Techwin for 1.9 trillion won ($1.7 billion) to affiliates of the Hanwha Group. Analysts said the sales were intended to raise money to pay inheritance taxes that could amount to 6 trillion won. The tax agency will probably send a bill amounting to as much as 50 percent of the assets the three children inherit from the elder Lee, who is estimated to be worth about 12 trillion won.

The market is also interested in what the newly merged company’s main businesses will be once it opens its doors in September.

On May 26 when both companies reaffirmed the merger plans, management set a goal of turning the newly merged company into a 60-trillion-won revenue stream by 2020; double the 38 trillion won in combined revenue C&T and Cheil saw in 2014.

The biggest change that is expected to come out of the merger however, is a full-court press in biotech businesses, which the family sees as a core growth engine in the future.

At a forum in Hainan, China, in March Jay Y. Lee said, “Healthcare business, which combine Samsung’s IT, medical and medicine and bio as well as cultural and tourism businesses, will be a huge opportunity, a new growth engine.”

The bio sector has been considered to be one of two major pillars in Samsung’s future, along with the current No. 1 business, electronics and IT.

Cheil Industries, which had mostly concentrated on fashion, has been ramping up its development of special materials to be incorporated in several IT technologies, including bio products, ever since the overall structural changes within the conglomerate started in late 2013. 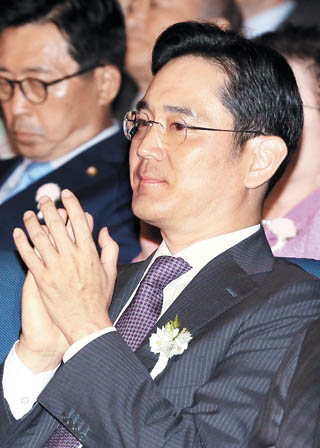 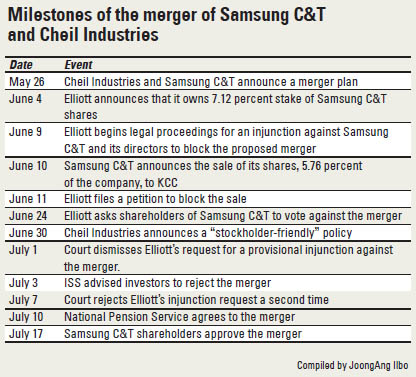 The merger of Samsung C&T is expected to further enhance the bio technology business as the construction affiliate currently owns 4.9 percent of Samsung Biologics. Cheil Industries owns 46.3 percent, so the new company will own a majority of Biologics.

Samsung Biologics was founded in 2011 as a joint venture with the global biopharmaceutical company Quintiles, which owns 2.5 percent of the company.

Biologics and another Samsung bio-tech company that specializes in similar products, Samsung Bioepis, earlier this month told investors that their goal was to make Samsung the world’s No. 1 in biomedical and pharmaceutical manufacturing within five years. Samsung Bioepis is planning to sell its “biosimilar” products next year and plans to seek a listing on the Nasdaq.

In May, Samsung projected that its bio businesses could be worth 2 trillion won as a result of the synergies created by the merger.

Although Cheil Industries and Samsung C&T’s current main businesses are steady, analysts say that Samsung urgently needs a new growth engine other than its smartphone business to keep going and protect its revenues and profits.

Samsung C&T’s trading business is also expected to benefit from the merger because Cheil Industries will probably expand its food, textile and fashion business into the global market.

Cheil is expected to use C&T’s global networks to distribute fashionwear from Cheil Industries and expand its food catering services.

Another earlier speculation was that when Samsung completes its restructuring, including the mergers of other affiliates, it will centralize its construction businesses that are now split among Samsung C&T, Samsung Heavy Industries and Samsung Engineering

But this plan is on hold for the time being because the Samsung Heavy Industries and Samsung Engineering merger has been halted and no additional move is expected from management anytime soon.

Things are not entirely rosy, though. After fending off Elliott Associates’ challenge to the merger but with publicity about the downside, the new unit has to fulfill its promise to enhance corporate value.

“Elliott’s case is a warning message to Korean conglomerates, which tend to be negligent about shareholders’ rights,” said Kang Seong-bu, the head of LK Investment Partners.