Outside Seoul, new centers have a sleepy feeling

Outside Seoul, new centers have a sleepy feeling 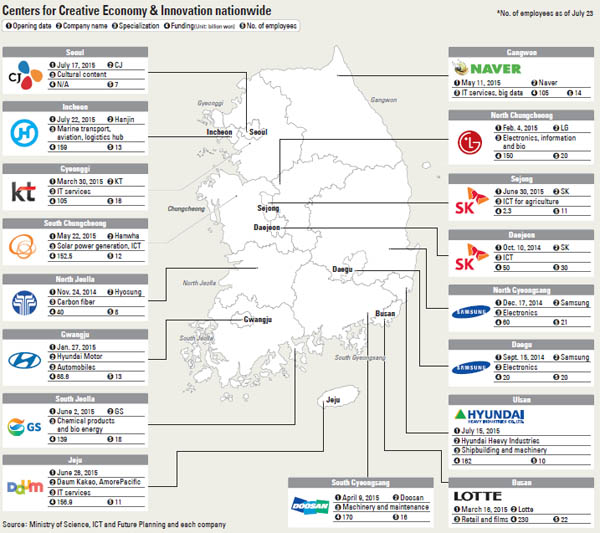 The Gangwon Center for Creative Economy and Innovation in Chuncheon, Gangwon, was empty on the afternoon of July 22.

The center that the Internet portal site operator Naver jointly opened with the provincial government in May in a 13,000 square-foot space in the Hanvit Building at Gangwon University has a so-called “big data laboratory,” a consulting room and a meeting room. But only one part-time worker, a student at the university, was present.

Smart Farm, a device that collects data on agricultural products’ growth and environment, was turned off. The center’s staff proudly presented the machine to President Park Geun-hye during her visit to the center earlier.

The eight offices inside the center, which were supposed to cater to those aspiring to open their own businesses and start-ups, have yet to see an occupant. 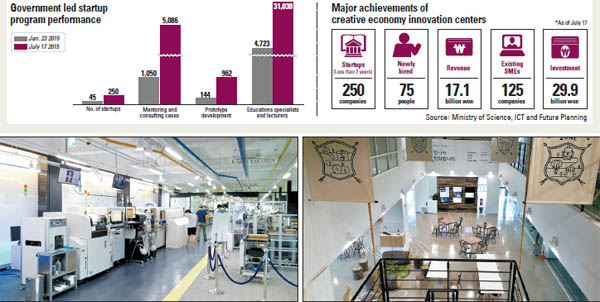 “We have picked five companies that are set to move into the center through a public recruiting process,” said Baek Seung-ho, secretary-general of the center. “There are not many people who wish to launch their own start-ups in Gangwon province. Even if there were, the majority of them want to go to Seoul or a metropolitan area.”

The Gangwon center was not the only one sitting empty; the JoongAng Sunday visited seven of them during the second week of July for this article. The situation wasn’t very different in South Chungcheong, Jeju and Gyeonggi - a contrast to the already jam-packed Seoul center.

The creative economy center housed in the South Chungcheong Techno Park in Cheonan, South Chungcheong, has seven offices for start-ups, but only two are occupied. At the center, which also opened in May with financial funding from Hanwha, no one was using the few desks, small printer and machine to produce packaging there. Only two university students were working, as interns, on an animation project for one of the two companies that had moved into the center.

Lee Byung-woo, head of the South Chungcheong center, pointed out earlier this month that the new centers for creative economy and innovation overlap with existing local government-backed institutions designed to support start-ups, such as the techno parks scattered nationwide that actually accommodate the creative economy centers.

“The Ministry of Science, ICT and Future Planning needs to be more actively involved in adjusting the functions of existing techno parks and centers for creative economy so as not to waste resources on their overlapping operations,” he said.

Kang Kyung-sik, a member of the provincial assembly in Jeju, said the Jeju Techno Park and the Jeju Center for Creative Economy and Innovation also have similar roles. “Jeju Techno Park is already struggling with a shortage of human resources and financial support, and when the government injects funds into the creative economy center, the situation with the techno park will get even worse.”

But the central government has a different view. “Techno parks and creative economy centers are supposed to be partners. The former caters to already established companies and the latter to start-ups,” said Koh Hyung-kwon, head of the Creative Economy Initiative for Public-Private Partnership, which overseas the creative economy center project.

Judging from the data the Ministry of Science has provided, the achievements so far at the creative economy centers are impressive. After the first center in Daegu opened with support from Samsung Electronics in September last year, all 17 planned centers have been launched under partnerships between conglomerates or large companies and local governments.

The ministry says 250 start-ups have benefited from the centers through technology transfer and capital investments. The centers separately aided 125 existing small and medium-sized companies that have hired 75 new workers and generated combined revenue of 17.1 billion won ($14.7 million) thus far. Sixty-eight of the 125 companies have attracted a total of 29.9 billion won in capital.

The ministry has set an ambitious goal of supporting 5,000 start-ups and smaller companies by the end of 2017. Companies and local governments in charge of the centers have promised to provide 1.8 trillion won in funding over five years. If the Seoul center, run by CJ, announces its own funding (it has not yet done so), the size of the fund in the making may approach 2 trillion won. But only about 10 percent of that is in the bank now.

“The government and companies should not only spur formation of the promised fund as soon as possible but also be ready to invest the money more proactively,” said a head of a private start-up incubator. “Creative centers should not end up fizzling out after the current administration ends and after spending part of the funds that the government may promise but not deliver.”

His comments echo those of Koh Hyung-kwon of the Creative Economy Initiative for Public-Private Partnership. He said formation of the fund requires time, and it will not necessarily be completed in a single round.

Although the government proudly said that the Daegu center helped the launch of 18 start-ups in the first half though its own incubator program, C-lab, none of them have yet to receive investments from any company, even after the lab organized a “pitching day” in the presence of potential investors. A head of one of the 18 start-ups confessed he ended up receiving the funds the center had promised to pay by the end of December only after a delay of one month.

The perfunctory allocation of creative economy centers to 17 cities and provinces across the country and matching them up with respective major companies in Korea, including the 10 largest conglomerates, is another issue. Chaebol executives confess they joined the government project under “visible or invisible pressure,” and some considered their participation a kind of “donation.”

“I am not sure what’s going to happen [with the creative economy centers] in three years,” said an executive from one of the participating conglomerates who is now dispatched to a center. “There is a saying already that the centers will be gone at the turn of the administration. We also think the centers will pretty much be temporary.”

There are many precedents for a core government project being trashed in the following administration. The Kim Dae-jung administration came up with a policy to foster start-ups to “innovate” the economy, but that policy was gone with the launch of the next administration. The Roh Moo-hyun administration tried to foster “10 next-generation growth drivers” under its “Vision 2030” plan, but no trace of it is to be seen now. The Lee Myung-bak administration came up with a “green growth” catchphrase and spent 22 trillion won to launch a project to restore four major rivers, but that project is already viewed as a failure. Now the “green growth experience center” established under the Lee administration in Gwanghwamun, central Seoul, has become the Seoul creative economy center during Park Geun-hye’s tenure.

“Korean governments have this very bad practice of intentionally suspending or barring major projects from the previous administration to make itself look better,” said one ministerial-level official in the Lee administration. “It is not good, both in terms of policy continuity and efficiency.”

John Howkins, author of the 2001 best-seller “The Creative Economy,” noted during a recent visit to Seoul that the success of the creative economy centers depends on their efficient operation. The government should not try to lead companies and should only help them, he advised.