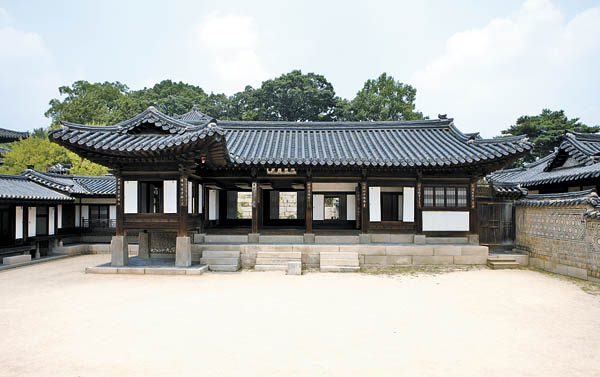 The Nakseonjae Complex in Changdeok Palace is the latest subject of a debate over preservation and commercialization. Provided by the CHA

Nakseonjae, considered one of the most beautiful parts of Changdeok Palace, means “a mansion with joy and virtue” in Korean.
However, the Nakseonjae Complex these days is making headlines for being the subject of a heated debate between preservationists and policy makers.

News surfaced recently that the Korean government is considering transforming parts of the complex into a high-end guesthouse catering mostly to foreign dignitaries and chief executives.

Preservationists were furious. They argue that the move will inevitably expose the historic site to risk of damage, including fire. In 2008, the 600-year-old gate and Korean National Treasure No. 1, Sungnyemun, was destroyed in an arson attack. The tragedy occurred after former President Lee Myung-bak - who was then the mayor of Seoul - opened the gate to the public.

The controversy escalated with the Kyunghyang Shinmun reporting on July 16 that the government is considering charging 3 million won ($2,578) a night at the Nakseonjae Complex. This led the Cultural Heritage Administration (CHA) to arrange a press conference and explain that the idea has emerged but nothing is set, including the price. It added that preservation and safety are the priority. 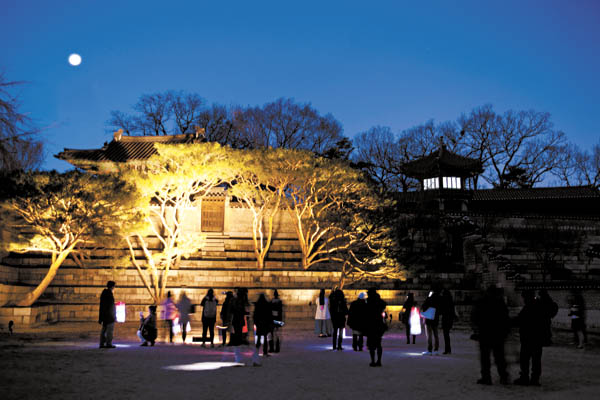 The Nakseonjae Complex, one of the most storied and scenic sites in Changdeok Palace, is the highlight of the palace’s popular Moonlight Tour. [JoongAng Ilbo]

The whole scandal reopened the old debate on cultural properties: Which comes first, preservation or utilization? Or better yet, can the two coexist? After all, policy makers have argued that the idea came about as they were deliberating ways to kill two birds with one stone.


A night at the palace
The Nakseonjae Complex, built between 1847 and 1848, refers to a group of nine structures (with one of the structures called Nakseonjae). The complex is located at the southeastern corner of Changdeok Palace, which is on Unesco’s World Heritage List.

“At Nakseonjae, I could really get immersed in the beauty of hanok [traditional Korean houses],” Shin Young-ok, a 59-year-old housewife, said of her recent visit to the complex. “I was particularly impressed by how each of the traditional lattice doors features different patterns. I couldn’t stop taking photos.”

In contrast to other buildings, Nakseonjae is considered feminine. The walls and tiles feature patterns like flowers, turtle shells, calabash and grapes. The rear garden filled with mysteriously shaped stones exemplifies traditional Korean gardens. The structures also have a cozy and homey feel, as they don’t include dancheong, the traditional decorative coloring used on wooden buildings.

The guesthouse proposal would involve two of the structures within the complex - Seokbokheon and Sugangjae - according to the CHA. The Nakseonjae Complex as a whole is Korea’s Treasure No. 1764, but the designation doesn’t specify those two structures.

Shin, a fan of history and art, says she is against the idea of making what used to be a king’s residence into a commercial entity. “Even if authorities heighten control, they cannot keep tabs on people’s every move inside the rooms,” she said. “I think the government should preserve the palace as it is and build a separate structure for the guesthouse.”

Kim Hyo-sil, another fan of Nakseonjae, agrees. “I read that the government is modeling the program after similar ones in Europe, like the Parador in Spain,” the 33-year-old said, “but the castles and palaces of Parador Hotels are made of stone, whereas Korean palaces are wooden structures.”

Kim, who has traveled to more than 35 countries, says she is all for the idea of opening cultural properties, including Nakseonjae, to more people for one-time or temporary programs but definitely not as a permanent lodging facility. Like Shin, Kim says the government should build a separate structure for the guesthouse.

Left: Nakseonjae is considered feminine, with interesting details on latticed doors and stone walls. Right: Since the government recently announced that it may transform parts of Nakseonjae into an upscale guesthouse, preservationists are opposing the idea. Provided by the CHA

Turning Nakseonjae into a guesthouse is part of the government’s years-long attempt to open up the palaces.

Just a decade ago, palace tours were much more limited. Visitors weren’t allowed to go inside the structures, or sit on the floors and enjoy the intricate artwork on the ceilings. There were “Do not enter” signs here and there, and one could only imagine what was beyond the closed traditional lattice doors.

Since 2009, the government has been working on allowing wider access to palaces through various experimental projects. That year, Prada built a large architectural structure next to Gyeonghui Palace in central Seoul for its “Prada Transformer” exhibition.

Since 2010, palaces have been open at night at certain times, allowing visitors to wander around the grounds by the light of a cheongsachorong, a traditional red-and-blue lantern.And in 2012, artists set up their works at Deoksu Palace for the “Deoksugung [Doeksu Palace] Project” exhibition organized by the National Museum of Contemporary Art. Today, it is not hard to see performances, art exhibitions and lectures take place inside the palaces.

Kim Bong-ryol, an architect and president of the Korea National University of Arts, is an advocate of such programs. “Wooden structures are living organisms,” he said, adding that neglecting such a building for even six months would cause it to age 20 years.

Bae Hyung-min, an architecture professor at the University of Seoul, agrees. “Architectural heritage shouldn’t be like a taxidermied animal, nor should it be an artwork that people just look at,” he told a Korean broadcaster. Buildings only come alive when people use them, he said.

In line with its attempts to make palaces more people-friendly, the government plans to offer Tongmyeongjeon within Changgyeong Palace as a guesthouse sometime this month, at around 400,000 to 500,000 won a night.

Authorities had used the structure for overnight cultural programs for low-income families, but this would mark the first time that the government will be offering Tongmyeongjeon as paid lodging for anyone.

Kim Jong-jin, the CHA deputy administrator, told reporters last month that although a lot of media attention has focused on the overnight program at Nakseonjae, the government is “deliberating on many ways to utilize cultural properties.” 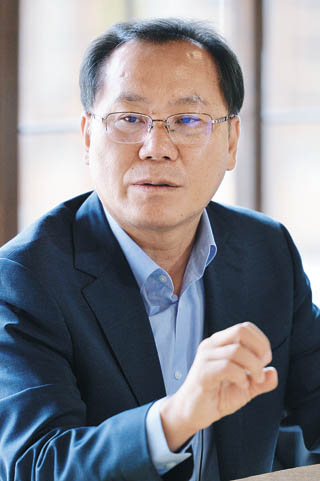 Kim Jong-jin, the deputy administrator of the Cultural Heritage Administration, told reporters last month that the government is “deliberating on many ways to utilize cultural properties.” [NEWSIS]

He added that a clearer picture of the plan will likely emerge at the end of this year.

In fact, the government is considering opening seowon (Confucian institutions that functioned as both schools and shrines), hyanggyo (traditional schools), as well as regional government buildings from past dynasties as guesthouses, too.

Sources say the so-called “K-Heritage Inn” program could be launched as early as next year.

With unexpectedly heated criticism, the CHA is maintaining the stance that nothing has been decided yet and it is open to ideas. Furthermore, it has also somewhat passed the ball to another player, saying that it is up to the Committee for Cultural Heritage, a panel of 12 experts within the CHA.

Any new projects concerning state-designated cultural properties must be approved by the Committee for Cultural Heritage. Although the date of their meeting on this proposal has yet to be set, Korean media outlets have reported that some members of the committee have finished on-site inspections for the Nakseonjae guesthouse project.

In the meantime, opponents also argue that considering the history of Nakseonjae, the structures should not open as a guesthouse.

Kim Kwang-hyun, an architecture professor at Seoul National University, told Yonhap News Agency that “all buildings have a history of their own. Nakseonjae was where Prince Yeongchin [1897-1970] and his wife Lee Bang-ja [1901-89] passed away. There is sadness in the building, and it’s not the best place to be transformed into a guesthouse.”

However, Nakseonjae originally represented love. King Heonjong (1827-49), who built the structures, insisted that his beloved royal concubine, Kim Gyeong-bin, have sole use of one of the buildings. Such an event was previously unheard of in the royal history of the Joseon Dynasty (1392-1910).

King Heonjong’s grandmother, Queen Sunwon, also stayed at the complex. That’s why there are many patterns in the structures that symbolize fertility and longevity.

In the final years of the Joseon Dynasty, however, the Nakseonjae Complex was mainly the home of the last descendants of Joseon’s royal families. And their final years were rather tragic.

“Nakseonjae is secluded from the other palace buildings, but you can sense the presence of its former occupants,” wrote Hong Soon-min, a historian and professor at Myongji University, in his 1999 book, “The Story of Our Palaces.”

For instance, in the case of Prince Yeongchin - who was sent to Japan at an early age and forced to marry a Japanese woman - the Korean government did not allow him back into Korea until 1963. When he did come back to his home country, he settled at Nakseonjae with his family. But he was so sick, he spent the next seven years in the hospital. He died in 1970, but spent his last day at Nakseonjae with his wife.

Opponents argue that, among other reasons, the sad history of Nakseonjae makes it inappropriate to use the site as a commercial or leisure facility. At the end of the Joseon Dynasty (1392-1910), the complex was mainly the home of the last descendants of Joseon’s royal families, whose final years were rather tragic. Former residents of Nakseonjae include, from left, Prince Yeongchin and his wife Lee Bang-ja; Lee Gu and his American wife, Julia Mullock; and Princess Deokhye. [JoongAng Ilbo]

Lee Gu (1931-2005), the couple’s son, and his American wife, Julia Mullock, also lived at Nakseonjae from 1963. But the couple separated in 1977 and divorced in 1982 under pressure from the royal family, which wasn’t happy that the two failed to produce an heir.

But the saddest story of all is that of Princess Deokhye (1912-89), the younger sister of Prince Yeongchin. She was also forced to move to Japan as a young girl and marry a Japanese duke. But after Japan surrendered in World War II, he divorced her and the princess, who had suffered from a nervous breakdown after being sent to Japan, was put in a mental hospital.

Only after the princess passed away, according to Changdeok Palace officials, was the structure restored to what it looked like when it was first built, removing the modern-style kitchen and bathroom that the Joseon descendants used from the 1960s to 80s. Whether anyone else will be dining and sleeping in the storied palace of a long-gone kingdom remains to be seen.