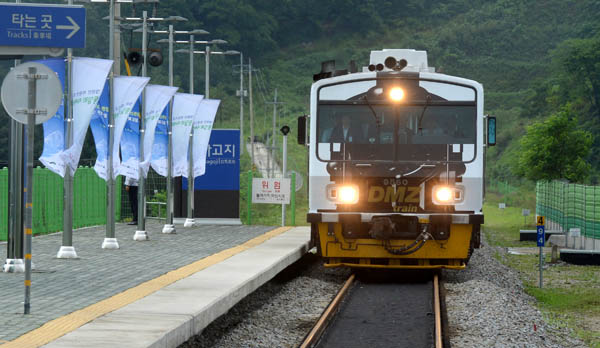 President Park Geun-hye in an address on Wednesday urged North Korea to come out of isolation and choose a path to reform in the pursuit of prosperity and development.

“I hope that North Korea will choose a path to change and open its doors to the outside world so that it can pursue prosperity and development for the future,” Park said during a ceremony marking the restoration of a South Korean section of a 223.7-kilometer (139-mile) railway line that used to connect central Seoul to the North Korean eastern city of Wonsan.

Her calls for the Communist country to join hands in her Eurasia Initiative come just before restoration work begins on the Gyeongwon railway line in Cherwon, Gangwon, on the border with North Korea.

“The door of opportunity stands wide open for North Korea to join in our efforts,” continued Park, who added that reconnecting the Gyeongwon line would serve as a starting point for reunification by healing the painful memories associated with the peninsula’s division.

“Before the division, the Gyeongwon line was a channel of communication between the North and South, transporting students on school field trips to Mount Kumgang and passengers on their way to see their loved ones,” she said.

Completed in 1914, the disconnected Gyeongwon line once linked Yongsan Station in central Seoul to Wonsan in the North, now known to be a vacation destination for North Korean leader Kim Jong-un.

But the line was severed following the division of Korea in 1945. The latest restoration project centers on reopening a 9.3-kilometer route that links Baengmagoji Station and the border town of Woljeongri in Cherwon. The government plans to complete the restoration by 2017, which will add the 9.3-kilometer line to an already existing 94.4-kilometer line linking Yongsan Station in Seoul to Baengmagoji.

Due to geopolitical issues, the restoration of railway lines in the North to reconnect in the South has not seen progress despite decade-long talks concerning the project. Park’s remarks Wednesday were seen as yet another effort by the South to persuade North Korea to answer the call to reconnect lines severed for 70 years.

In a press release issued after Park’s address, the presidential office expressed hope that the North would also follow suit and that the two Koreas could “become a hub of logistics” with their reconnected railway lines, which would expand to connect Eurasia.

“We plan to have discussions with North Korea to reach an agreement to restore [the Gyeongwon line] in the North and around the demilitarized zone,” the Blue House said.

That sentiment was also echoed by President Park, who noted in her speech that the reconnected Gyeongwon line would “serve as a springboard for the Korean people to achieve economic prosperity through the Eurasia Initiative.”

Park’s appearance at the ceremony underscores her resolve to carry out her Eurasia Initiative, a plan she declared two years ago that seeks to reconnect the two Koreas’ idled railways to expand operations all the way to Europe via China and Russia - a revival of the Silk Road.

But accomplishing such a grand project requires cooperation from North Korea on repairing its abandoned rail lines and reconnecting them to lines in the South. It remains to be seen whether Pyongyang will react positively to Park’s overture given tense relations.