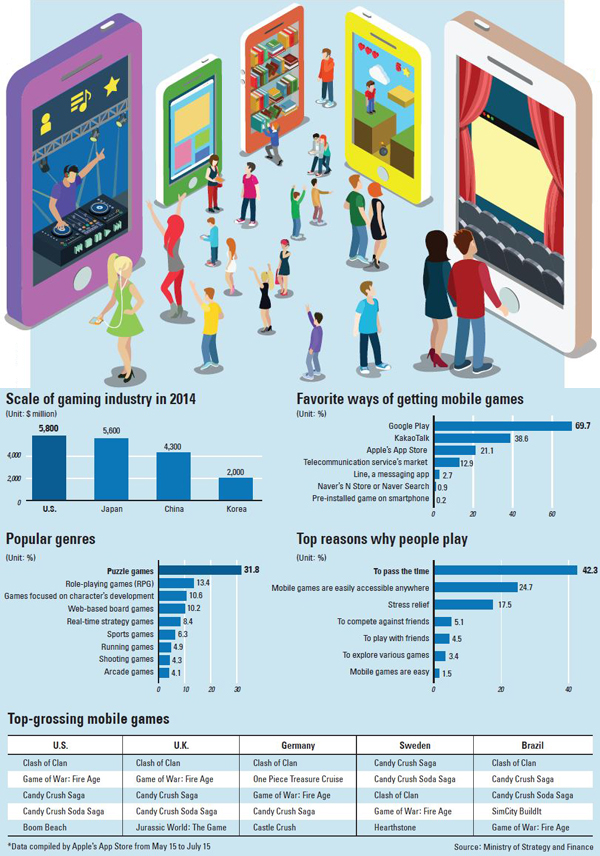 Korean developers used to dominate the computer game industry, leading with innovative content. But as the market has moved to emphasize mobile games, local developers are having trouble keeping up. Some argue they are too focused on making a quick buck from gamers, rather than developing globally competitive content.

The gaming industry in Korea began in the late 1990s with the emergence of the personal computer. While arcade and console games were popular on the peninsula before, almost all were imported from countries like Japan. But as PCs became more widely available, kids that had grown up playing those imported games started to try their hand at developing their own content.

But those games came out over 15 years ago. Today, mobile games for smartphones and tablets are seen as the future, and Korean developers are having trouble creating hit games.

Last year, the scale of the domestic mobile game market was estimated to be 2.4 trillion won ($2.1 billion), the fourth-largest worldwide. But as the global market expands, Korea’s mobile gaming industry is expected to contract next year.

The reason, analysts say, is because Korean mobile games are too conventional, and game developers are too focused on squeezing money from players.

One of the most common phrases in Korean game development circles is that a “game starts and ends with experimental spirit.” But while foreign companies are experimenting with new game concepts and the creation of fresh new worlds, Korean developers have been busy trying to find new payment systems and addictive elements to generate revenue.

Some blame KakaoTalk, Korea’s most popular mobile messenger application, for the dearth of innovative game developers. KakaoTalk created mobile games with the intention of increasing its users, rather than producing truly original content. The company got lucky with games like Anipang and DragonFlight, which brought more users and windfall profits for the messenger app. But the games’ success had consequences. They proved that a mobile game could generate massive revenue quickly, so the number of mobile games skyrocketed. This reduced users’ attention spans and created a demand for more and more games. Smaller firms, which were often more innovative, couldn’t afford to keep up, as whatever games they created were lost in the flood of other content washing over the market. They began to leave the market one by one. Now, only development giants like Netmarble and Nexon are left.

KakaoTalk’s success also changed the kind of games that were produced. Since the messenger app takes 21 percent of in-game sales, it asked developers to focus on games with the ability to make short-term profits. This in turn narrowed the diversity of mobile games, which also made them less competitive globally.

“The Korean mobile game industry has grown with KakaoTalk’s demand to focus on lucrative elements instead of players’ preference,” an industry insider said. “As mobile game developers avoid risks, they focus on making quick profits with hit games rather than having a long-term strategy.”

Mobile games like Seven Knights, Legion of Heroes and Immortal Warrior are representative mobile MMORPG games produced in this kind of game development environment. They’re often called “Nogada games,” a phrase derived from the Japanese word dokata, which means requiring much time and effort. Players need to spend a lot of time leveling up their characters, and the games involve different reward systems on a daily, weekly and monthly basis to keep players coming back. Random items are sold at different prices at different times, encouraging players to buy impulsively. As a result, the games often record high sales. It is not unusual in online gaming communities to see posts from people saying they spent several million won on the games.

But while these games are short-term successes, they do not tend to do well in the long term. Players tire of raising their characters and having to buy items. In contrast, the top-selling games worldwide - Clash of Clans, Puzzle & Dragons, Monster Strike and Candy Crush - all have strong puzzle elements and don’t require a huge time commitment from their users.

“Foreign mobile game companies are based on a free-to-play platform, but Korean mobile games are too obsessed with drawing money from their customers,” an industry insider said. “Stimulating players’ fanaticism to make profits can boost their assets instantly, but players can be easily bored. This aspect makes their games not as globally competitive as casual foreign mobile games.”

“Obsessively making players pay for virtual goods is one of the many problems Korean mobile game industries have, which make them difficult to compete in the global market,“ explained Yoon Hyung-sup, a game professor at Sangmyung University.

One example of Korea’s floundering gaming competitiveness is the relationship between Korean developers and the Chinese gaming market.

Korean game developers often go to China with new games that are unsuccessful in the domestic market. Many used to believe they could succeed in China because it had has a similar gaming culture to Korea, but that Chinese consumers have lower standards for good games. Developers usually test out their content in China three months to one year after they release in Korea.

But these days, the situation is starting to reverse. While Korean game developers have narrowed their focus to short-term profits, Chinese developers have been making more - and better - games.

Some of the advantages for Chinese mobile game companies are massive funding and huge numbers of players. Since last October, the number of new games released in China is estimated to be 3,400, an average of 14 games each day.

Many of Korea’s best and brightest developers are now heading to China to take advantage of the market there, but it is not easy to break into. Tencent has a notoriously difficult and selective screening process, with seven stages. Devsisters, known for its game Cookie Run, made a contract with Tencent last year but had to withdraw because the firm failed to meet Tencent’s standards.

What can Korean mobile gaming companies do? One place to start is adding more creative elements to their games to help them stand out in the market. But these companies also report having a tough time receiving enough funding from the government and investors to create hit games. The companies say that a successful game is often the result of three or more failed attempts, but most game firms currently don’t have the assets to support that kind of failure.

“Early in 2000, when we watched PC-based online games’ massive growth, there was plenty of money flowing into the game market,” said one game developer. “The government should learn from other major countries like China and Germany, where they support their companies with free office space and tax exemptions.”