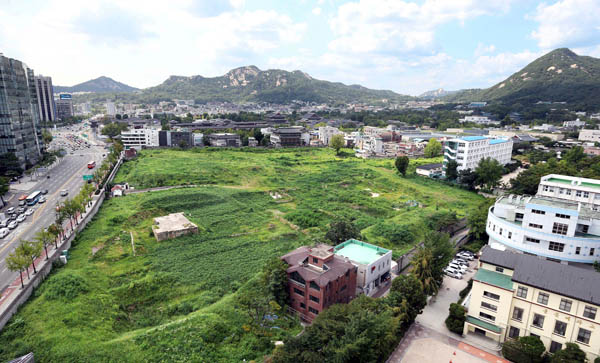 A lot in Songhyeon-dong, central Seoul, will be home to a cultural complex in 2017, according to the Culture Ministry on Tuesday. By Kim Sang-seon

The Ministry of Culture, Sports and Tourism announced Tuesday it will build a cultural complex on a lot east of Gyeongbok Palace where Korean Air had planned to build a hotel.

The lot in Songhyeon-dong, located between the Gyeongbok Palace and Insa-dong, central Seoul, has been making headlines since Korean Air bought it in 2008 with plans to build an upscale hotel, performance hall, gallery and shopping center.

Critics have also opposed the airline’s plan to build a hotel in Songhyeon-dong because of the historical and cultural significance of the area and because of general anti-chaebol sentiment. 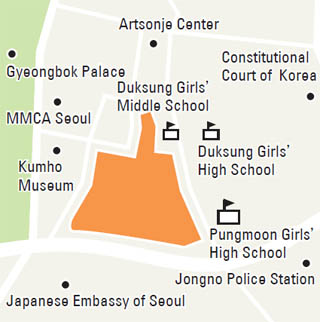 Announcing the Park Geun-hye administration’s plans for the cultural sector for the second half of her term in a hastily arranged briefing on Tuesday, Culture Minister Kim Jong-deok said the so-called “K-Experience” culture complex in Songhyeon-dong will be a place where foreign tourists “will be able to experience everything Korean, with the focus on traditional Korean culture.”

Kim added that in connection with nearby Insa-dong and other neighborhoods with traditional elements, the cultural complex will “demonstrate and sell traditional Korean content.” The government and Hanjin Group, the conglomerate whose affiliates include Korean Air, will be working together on the project, according to the Culture Ministry.

Jo added that “[Korean Air] plans to contribute to the government’s policy directive [of enriching people’s lives through culture].”

According to Korea’s School Health Act, a hotel is not allowed to be built within 50 meters (164 feet) of a school, and in order to build a hotel within 200 meters, builders need to obtain a green light from educational authorities.

Jo said the motif for the building will be traditional Korean architecture, but the technology involved will be highly advanced. The building will be four to five stories high and the first stage of construction will be completed by 2017, he added.

However, an insider at Korean Air told the Korea JoongAng Daily that Korean Air “has not totally given up on building the hotel, and that is the official position internally,” adding that “there is still a possibility through revision to the related laws.”

During Korea’s Joseon Dynasty (1392-1910), the Songhyeon-dong site was home to many organizations related to the royal court. They included Gamgodang, where Queen Myeongseong (1851-95) briefly lived; Saganwon, or the Office of Special Counselors; and Jongchinbu, the Office of the Royal Genealogy.

When Japanese colonization (1910-45) began, the land was used for employee residences of the Chosen Shokusan Bank. After Japan was defeated in World War II, the U.S. government became the owner of the land and built residences for employees of the U.S. Embassy in Seoul.

“The government must first make it clear that no hotel will ever be built on the site,” Hwang Pyeong-wu, director of the Eunpyeong History Hanok Museum, said. “Its announcement of a cultural complex is rather vague and I’m concerned it’s only stage one for building a hotel. The site is too important historically and culturally to be the site of a lodging facility.”