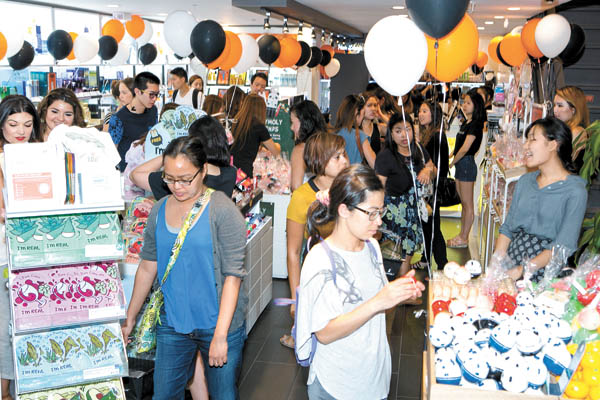 NEW YORK - The scent of Korean perfume flowed down West 32nd Street in New York on Aug. 13, drawing in passers-by.

Korean cosmetics company TonyMoly opened its flagship store in Manhattan that day. At the opening event, the store was packed with customers and major beauty bloggers, from young teenagers to those in their 50s.

Especially popular with shoppers were fun products in containers shaped like fruits, cute animals and more.

“When you just look at the container, you can guess the purpose of the product,” said Cloe Lim, the 34-year-old manager of the New York store. “The strong point is its approachableness to consumers.” 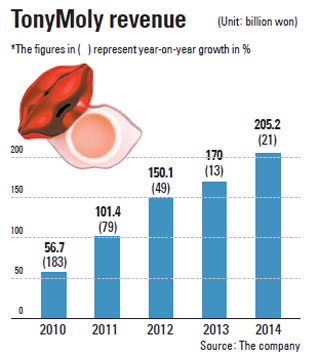 The cosmetics company, which is celebrating its 10th anniversary, is expanding its presence in one of the world’s largest markets, the United States, largely thanks to the growing popularity of so-called K-beauty.

K-beauty refers to the rising global demand for Korean beauty and fashion products that is largely driven by the popularity of Korean pop culture.

Before launching the latest store in New York, TonyMoly opened up a flagship store in San Francisco a month earlier. Opening new branches is just one of the steps being taken by the cosmetics company, which hopes to become a global brand.

When visiting the Sephora store in New York’s Columbus Circle, customers showed particular interest in the TonyMoly products on display, along with other Korean cosmetic brands like AmorePacific and Belief.

In New York, the customers who purchase TonyMoly products are not limited to Koreans. In fact, according to the company, 95 percent of the customers are non-Koreans, including Americans, Canadians and Europeans.

As the company’s customer base has been expanding, some of TonyMoly’s products have become major sellers. One such product is Kiss Kiss Lip Essence, which was first launched five years ago. When exported to the United States, the product was rebranded as Bbo Bbo Lip Balm. In the first five months of this year, U.S. sales of the product reached over 200,000 units.

Michelle Kim, vice president of TonyMoly’s Sephora sales and marketing, said not only are TonyMoly products recognized for their reasonable prices, but the quality is also well-known, since Sephora named TonyMoly one of the top 10 brands to take notice of in 2014.

The cosmetics company is also in negotiations with other major U.S. retailers, including Walmart, Walgreens and QVC.

It hasn’t been long since U.S. consumers started to take notice of Korean cosmetics products. Interest in Korean beauty goods spiked after Psy’s “Gangnam Style” became a sensation in 2012. Those interested in beauty couldn’t help but notice the firm, well-moisturized skin of the women in the music video.

Excitement was high at the opening day of TonyMoly’s new store in New York.

A 23-year-old customer named Anna said her favorite TonyMoly product is a lipstick lineup called “Perfect Lips Shocking Lip.” She said that she is satisfied with TonyMoly’s products, as they are as good as those offered by major global beauty brands that are 10 times more expensive.

TonyMoly last year reported 205.2 billion won ($171.5 million) in revenue. That’s a 21 percent increase compared with the year before. Currently, the company has roughly 5,000 stores in 24 countries.

Charlotte Cho, founder and CEO of Soko Glam, a website dedicated to K-beauty, said differentiated products found only at TonyMoly, such as those whose main ingredient is snail, are especially gaining recognition.