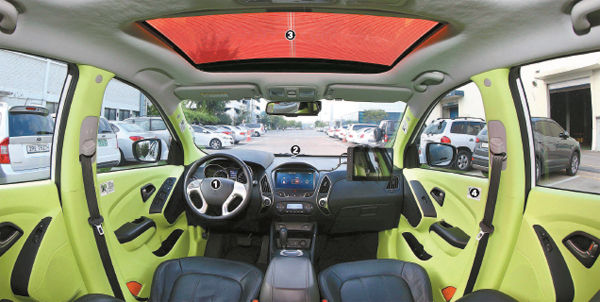 With an exterior similar to its popular Tucson, the new model is filled with cutting-edge technology.

The car includes a hydrogen fuel cell, which Hyundai successfully mass produced for the first time in history; an intelligent sensor dubbed “Lidar” that uses a beam of light to avoid hazards on the road; a rooftop solar panel that powers the vehicle; and environmentally friendly interior materials.

“While the Hyundai Kia Motors R&D Center in Hwaseong is aimed to study technologies for the current market, this institute [in Uiwang] is dedicated to inventing future-oriented technologies for the market decades ahead of now,” said Rim Tae-won, president of the Uiwang center.

The R Car is a symbol of Hyundai’s goal to stay ahead in an automotive market that now includes IT giants like Google and Apple.

In March, Mercedes-Benz successfully completed a 40-kilometer (24-mile) test drive of its first self-driving car, the F 015, in San Francisco without any assistance from the human driver.

How does Hyundai’s new car stack up? To find out, a reporter from the JoongAng Ilbo sat in on a test-drive on Aug. 13, at the test-drive track in the Uiwang center.

When the driver - a Hyundai engineer - pushed a button, the so-called Heads-up Display (HUD) appeared on the windshield as a transparent screen. While many HUD technologies currently on the market offer simple information, like a map or the car’s speed, the R Car’s HUD explains to the driver what the vehicle is seeing and how it is responding to things like other drivers and obstacles on the road.

The steering wheel moves by itself. Right ahead were two cars, parked about 2.5 meters apart. The Lidar censor estimated the distances between them and passed through safely.

“While German automakers are focusing on making faster self-driving cars, we are attempting to differentiate ourselves through advanced low-speed driving, particularly in traffic jams,” said Lee Chang-jae, a manager at the intelligent safety research department at the institute.

The orange-colored solar panel on the R Car’s roof produces electricity that powers an intelligent temperature adjustment system, which optimizes the temperature before the driver enters the vehicle.

On the same day as the test drive, Hyundai engineers opened the 21st floor of the institute to show off futuristic technologies. A lithium-air battery is under development to raise the maximum mileage of the self-driving car, run currently by a lithium-ion battery, up to 500 kilometers. Its current maximum distance is 160 kilometers.

Launched in 2009, the institute is led by Rim, who pioneered the mass production of the hydrogen fuel cells.

“Compared with German or Japanese cars, the overall quality of our products has improved,” Rim said. “However, in terms of ‘base technology,’ there’s still a gap between the vehicles of our competitors and our own, so we hope the government and local universities will provide us with talented candidates in fields from physics to chemistry.”

Hyundai has come a long way from its start in 1967, when it produced 3,000 cars per year from an aging factory. Despite the automaker now ranking as the world’s fifth largest, producing eight million cars annually worldwide, experts say there are still areas where the company can improve.

“The technology of Korean automobiles has already reached an internationally recognized level,” said Yu Ji-soo, president of Kookmin University and a former chairman of the Korean Academy of Motor Industry. “But automakers are still behind on branding when it comes to premium or luxury cars.”

Consumers’ expectations for vehicles are also changing. While a car used to be just a means of transportation, consumers now want a hybrid product that includes IT and entertainment options in addition to a comfortable ride.

Engineers said they try to follow the mantra of “technology independence,” first espoused by founder Chung Ju-yung in the development of earlier products like the like the Hyundai Pony and Alpha engine.

The outcome of their focus on new, ground-breaking technology is reflected in the R-Car, they said.

But competition is getting hotter, with other car companies always rolling out new technologies. Recently, BMW 7 Series rolled out “gesture control” technology in the 7 Series to allow the driver to operate buttons without having to remove their hands from the steering wheel.

The market for hydrogen fuel cell vehicles is getting more competitive as well. Toyota’s Mirai is set to be sold in North America in the second half of the year, which will challenge Hyundai’s Tucson Fuel Cell electric vehicle.

Sales for self-driving cars are expected to surge by 2025 to 230,000 worldwide, according to an analysis by IHS, a market data provider.

The only way to for Hyundai to win is through the development of distinctive technology.

“When we produced the Tiburon in 1996, we didn’t even have a mold to produce the exterior body,” said Park Jong-seo, former president of the Hyundai Kia Design Center. “We didn’t even have experience handling steel products at the time. Everything was done through the struggles and efforts of engineers.”

When Hyundai developed the Pony in the 1970s, engineers were also lacking in rubber, so many local rubber makers in Busan helped them produce the sedan, which had more than 20,000 components.

“The time when the Korean automotive industry had a large gap in base technology, such as mileage, is over,” said Lee Dae-un, head of AT&M Consulting, an automotive firm. “Now is the time to accelerate convergence with IT and telecommunication technologies.”

Yu, the former chairman of the Korean Academy of Motor Industry, added, “If the government supports the Hyundai Motor Group, it will have a trickle-down effect on thousands of auto parts makers, improving overall technology in the automobile industry.”