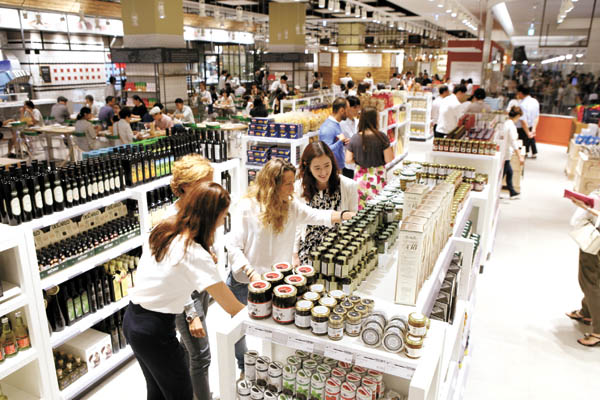 Customers shop for groceries at Eataly, the newly opened Italian grocery store at the Hyundai Department Store in Pangyo, Gyeonggi. Provided by the company

Premium grocery stores and international food outlets are no longer confined only to the Gangnam area, known as the most affluent part of Seoul.

Retailers are branching out to other parts of the city and even the outskirts to attract a more diverse range of customers eager to try out new tastes.

The hottest new spot to go to is the basement level of the newest branch of Hyundai Department Store in Pangyo, Gyeonggi, where there are many restaurants, dessert shops and even a grocery store. The store opened last Friday.

“The Pangyo area is known as the ‘next Gangnam’ because customers based there or near the area have high incomes and have shown its interest in purchasing premium food ingredients,” said the store’s communication team, adding that its food division has seen a double-digit growth rate every year even in the sluggish economy.

“That’s why Hyundai Department Store put so much effort into building up the branch and expects the Pangyo branch to become the hub to cover customers not only based in Seoul, but also to expand its presence in the nearby [Gyeonggi] area.”

One notable destination in the underground shopping area is Eataly, an internationally known outlet for Italian ingredients. The brand, which operates 28 branches worldwide, became better known after opening a shop in New York in 2010. Now it has stores in Dubai, Brazil, Turkey and Japan, in addition to those in Italy.

“Korea is really the first country [in Asia] where we can explain our philosophy,” said Eataly CEO Luca Baffigo Filangieri, who was visiting Korea for the store’s opening day.

“Italian culture and Korean culture are very similar [when it comes to cooking], as they are based on [quality] raw materials, and not only cooking in the kitchen, but also how you serve and present food.”

Eataly sells a variety of ingredients from different regions of Italy, from wheat products to olive oil. It also has many cooking utensils not readily available in Korea, including butter and cheese knives. 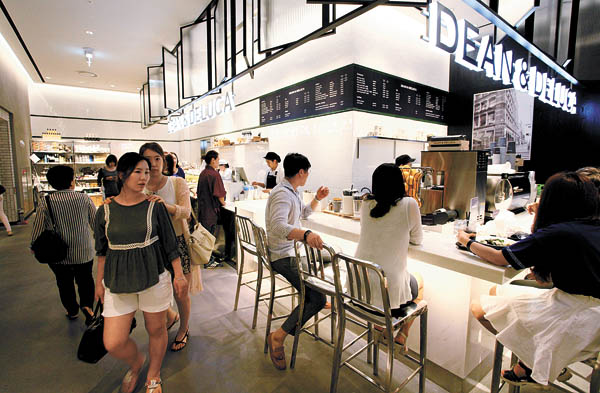 There is also a dining area, where one can enjoy made-to-order pasta and pizza as well as a simple plate of salumi, or Italian cold cuts.

There is also a coffee station and a gelato bar, as well as a station devoted to treats made with Nutella, the popular chocolate hazelnut spread.

To follow up on the store and discuss possibly opening more branches in Korea, the Eataly CEO already has plans to visit again in October.

Besides the gourmet grocery store, a famous New York cupcake shop, Magnolia Bakery, also opened its first Korean branch in Pangyo. The shop is well known among locals after appearing on the U.S. TV show “Sex and the City.” The line at the front of the store has further added to the hype.

“We haven’t checked the exact number of cupcakes we made in the first couple days since the preopening, but we did sell more than we expected,” said a PR coordinator for Magnolia in Asia.

The bakery plans to open another store in Korea later this month, but the exact location has not yet been announced.

The focus is on high-end prepared foods by department stores, rather than concentrating solely on groceries, because prepared meals and snacks sell better. Another upscale grocery store chain, Dean and Deluca, which first appeared in Korea in 2010, has seen better sales of its deli items than its raw ingredients and cooking aids.

“The store was brought in an attempt to introduce something that wasn’t in Korea to locals and to take the lead in the food industry,” said a representative for the brand.

“And as they are usually part of a local department store’s food section, ready-to-eat food items are more popular.”

Shinsegae Department Store has also been focusing on increasing the foreign foods available at its own supermarket brand, SSG. SSG recently opened a store in Mok-dong, branching out to serve customers in western Seoul, away from the usual hot spot of Gangnam. It opened in July, and has been taking in about 100 million won ($84,094) in sales every day.

“The amount shows that opening a food market in the new area was a very successful move for us,” said Shinsegae representative Kim Jong-min.

“The area is the biggest in western Seoul, and this has shown the possibility that the demand for premium ingredients is becoming more of a universal idea.”