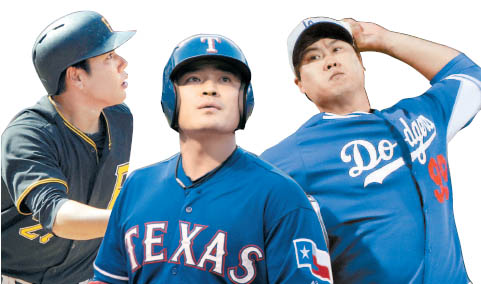 Korean baseball players are excelling overseas in Major League Baseball (MLB) with their experience and skill.

One example is Kang Jung-ho, the 28-year-old infielder for the Pittsburgh Pirates, who notched his seventh home run this season against the Minnesota Twins Wednesday local time. His strong performance in the past few weeks have led some pundits to name him a “rookie of the year” candidate.

Another strong player is Choo Shin-soo, the 33-year-old outfielder for the Texas Rangers, who made history recently when he became the first Asian player to hit for the cycle.

Then there’s Ryu Hyun-jin, the 28-year-old pitcher for the LA Dodgers who took 14 wins in his rookie season two years ago.

Analysts point out that top players in Korea already have the qualities necessary to join the world’s most competitive baseball league.

“Because they’ve already been playing in Korea for so many years and have participated in major competitions like the Olympics or the World Baseball Classic, their experience translates to confidence in their powerful plays,” said Huh Goo-yeon, a baseball commentator for MBC Sports.

Huh emphasized that Korean players still need to adapt to the MLB’s style of play, but he emphasized that “the KBO [Korean Baseball Organization] truly enhances” the skills and abilities of its players.

But as success abroad is a dream for Korean athletes, reactions from local baseball fans have been mixed.

“The outflow of Korean top stars is making the league less interesting. It is heartrending to see the quality of the league slipping,” said Kim Tae Young, a fan from South Korea.

Other fans are more positive, citing the benefits the athletes’ successes bring to the nation.

“It is a bit sad seeing the competitiveness of our nation’s league decrease,” said 17-year-old fan Ki Min-sung, “but I support the dreams of our athletes to perform on a bigger stage and elevate Korea’s national image.”

“[The success of players overseas] motivates other players to perform better, which would make the domestic league even more interesting for fans, because all players dream of entering the MLB,” Huh said.

“We should first pay attention to our national league. We should think in the long-term, and fans, players, clubs need to all put in effort.”