Where have the crowds gone at COEX?

Where have the crowds gone at COEX? 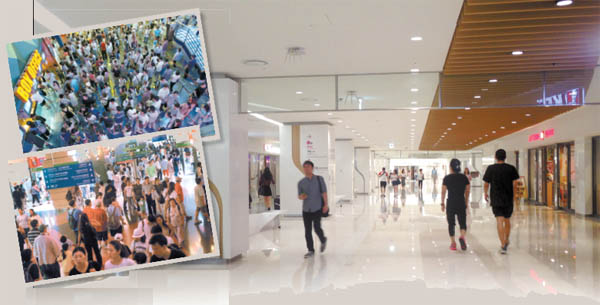 Left: Photos from the early 2000s show COEX Mall when it was the hot gathering place for Seoulites. [JoongAng Ilbo] Right: The renovated COEX Mall is relatively empty, even around dinner time on a weekday. By Lee Sun-min

A common question asked every Monday in the early 2000s was what one did at COEX Mall over the weekend. As one of the first multicomplex malls with a variety of entertainment options along with a multiplex theater to open in Korea, there was always a new store to try and it was almost like a competition to see who had found the most fun within the mall.

“It was the dating hot spot,” said Kim Seung-yon, an office worker who used to go to the underground mall at the COEX Convention and Exhibition Center in Gangnam District with her boyfriend in the early 2000s.

They would usually see a movie at the Megabox, eat at Kraze Burger and take pictures at a photo studio called Star Shot, which always had a long line. While waiting for the photos to be printed, they would spend time at Kosney, a home furnishing store that sold a lot of cute decorative items.

“But the place has lost its charm, and now I just go there to pick up lunch.” 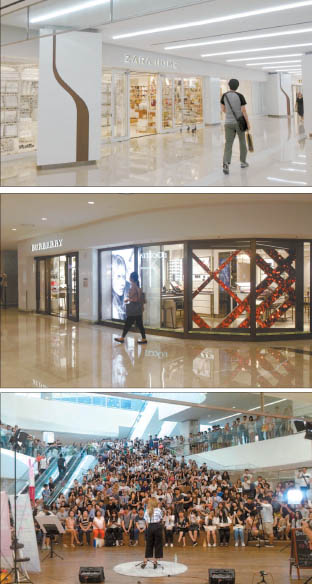 COEX Mall is striving to target customers with more buying power, so it brought in Zara Home, the first to open in Korea, and Burberry Beauty Box, the first store of its kind in Asia. And in an attempt to attract more crowds, the mall is hosting performances by both big-name musicians and indie bands. By Lee Sun-min, COEX Mall

COEX Mall, once known as the gathering place for hip youngsters to simply hang out, has been declining as a culturally iconic spot.

“Back in college, I remember COEX as a bustling go-to hot spot, but now the primary visitors are nearby office workers, and other than lunch hour, COEX is largely void of traffic,” said Jeenah Lee, who works nearby.

The mall underwent renovation for two years beginning in 2012 for a complete face-lift. Then it reopened in November of last year, generating much excitement that the mall would once again be the center of new trends in shopping, dining and new urban leisure experiences, just like it did when it first opened 15 years ago.

However, so far the new mall has fallen far short of expectations. While the number of daily visitors was expected to be around 130,000 to 140,000 before the reopening, the mall reports that it sees at most 90,000 visitors a day on average on weekdays and up to 120,000 on a day on weekends.

The problems with the newly renovated mall mainly stem from the mall operator’s efforts to target an older demographic: people in their late 20s to early 30s instead of teens and early-20-somethings.

To attract people with more buying power, the mall brought in more upscale luxury brands such as Burberry Beauty Box and Versace Jeans. However, the customers who can afford to shop at these stores are not as easily enticed, while the original younger customers can no longer afford to shop there.

“Those who can afford to buy luxurious items, they will go to big-name department stores where they can get their parking validated, and get additional benefits for buying more than certain amounts,” said Kim Myung-lag, chairman of the COEX Mall Merchants Association.

“While there are a flood of malls with similar products, COEX should have just focused on keeping the mall where people can buy inexpensive yet unique items, just like before the renewal.”

The mall has about the same number of stores as it did before with about 250 stores. Although the revamped mall increased in size by about 17 percent to a whopping 154,000 square meters (1.7 million square feet) - large enough to fit 21 soccer fields - but it seems to have lost diversity in its stores.

“The problem is that the mall doesn’t have anything fresh or unique to present to the visitors,” said a merchant running a small store.

“People would come to see the new mall but they don’t find any more reason to come visit the mall again.”

She added that it might have been better to have just renovated partially to update the older sections of the mall to avoid generating such high expectations.

And while the mall excitedly announced that many of its stores would be the first of their kind in Korea, such as Zara Home, the status didn’t last long because those stores opened branches at other malls almost instantly. And while the Burberry Beauty store is the first in Asia, the products are also available to purchase online.

Even when customers visit with a specific store in mind, it’s not so easy to actually find stores inside the mall. The mall, with its curved corridors, is often confusing for visitors who easily get lost once inside. Although there are many electronic maps customers can use to search for stores and directions, it is still difficult to follow the suggested route.

“Many, who tried to find directions on those electronic maps, come to ask us again because they don’t know how to read the suggested route,” said an employee at one of the three info desks in the mall.

“The mall is like a maze and many get easily confused about where to go when they have a specific store or restaurant in mind.”

Plus the walls have been painted white to make the mall look more spacious, but it had the effect of making it even more difficult to navigate as well as looking more empty.

New large malls opening across Seoul have also contributed to the drop in attendance at COEX Mall.

“I don’t have a particular reason to go all the way down to COEX Mall because I can find other malls or stores to fulfill my needs near my home,” said Lim Seung-joon, an office worker who lives in Seongnam, Gyeonggi.

In addition, department stores recently have been transforming into multipurpose family venues, and have been attracting more people who want to just hang out with friends, eat and talk, without necessarily having shopping as their main purpose.

Many big-name retailers such as Lotte, Hyundai and Shinsegae also have been positioning their stores near multiplex movie theaters or performance theaters.

Hyundai Department Store acquired D-Cube Department Store in Sindorim, southwestern Seoul, in May and turned the mall into one of its family-oriented branches. It renovated the food court and grocery store so that families looking for fuss-free outings need not go elsewhere.

Before Hyundai began expanding its operations beyond the department stores themselves, retail giant Shinsegae was increasing its offerings for visitors to its Gangnam branch. With retail know-how accumulated over decades, the department store has branched out to smaller storefronts around the Express Bus Terminal, which has included opening Famille Station, a popular dining cluster where many hot restaurants are in operation.

The dwindling number of visitors to COEX Mall over the past 10 months has been forcing merchants to leave the mall. Since the reopening in November, the mall said 15 stores out of 250 have closed down.

One merchant who’s been running a business there for over a decade says it is hard for him to keep his business open.

“Merchants have invested much while picturing that they will get better business opportunities here after the renewal, but as such anticipation fell through, some of the stores are packing up and leaving the mall,” he said.

“We invested more and are paying higher rents than before, but the sales have been cut in half.”

It is not just the smaller-size mom-and-pop stores that are leaving.

Some of the big names, such as the beauty products store Body Shop, shoe retailer Landrover, and stationary store Barunson, have packed up and left, and some other well-known sports brands are also getting ready to leave within this month.

Youngpoong Bookstore, one of the largest bookstore chains in Korea, is also analyzing the financial situation to decide whether to continue operating at COEX Mall, according to Chairman Kim of the merchants association.

“We barely see any lines even during lunch hour, or on weekends,” said a server at a Korean food restaurant in the mall.

“Things are really slow, and that’s why many are considering leaving.”

Many complain that COEX Mall has fallen short in coming up with a marketing strategy, as its mother company, the Korea International Trade Association (KITA), lacks retail know-how.

Before the renovation project, KITA operated the mall in collaboration with Han Moo Shopping, which operates the Hyundai Department Store branch near COEX and many shopping outlets. But now, KITA is the mall’s sole operator.

To help struggling stores, COEX plans to invest 10 billion won ($8.3 million) to help stores there to market themselves better to new customers.

“As we have strived to change our target customers after the renewal, some of the stores have struggled to see good sales,” said a communications team manager at COEX Mall.

To attract more visitors, the mall plans to hold a variety of promotional events. And with the underground walkway connecting the mall to Bongeungsa Station on subway line No. 9 open as of Thursday, the mall expects more traffic.

The mall has also decided to give an hour of free parking to visitors who spend more than 50,000 won ($42) at the mall.

Despite worries over the success of the renovated mall, COEX has been working to reinvent itself in order to see better performance in the future with the launch of the MICE Cluster Initiative.

Earlier this year the city enacted a plan to develop the area into a MICE (meetings, incentives, conferences and exhibitions) center.

Just as COEX Mall pioneered the concept of multicomplex malls in Korea when it opened 15 years ago, the mall is hoping to create an innovative new cultural space within the realm of tourism and events.

“There was a term ‘COEX Kids,’ indicating many who had grown up enjoying many new cultural contents in the 2000s, and now we are bringing the then-teenagers back to the mall,” said the COEX Mall in a release.

“We are providing outside consulting to some stores that have been struggling based on their store location, merchandising, interior design and target customers, so that we can provide the best solution to create higher sales.”

To provide more than just a shopping and dining experience, the mall aims to create a culture platform so that visitors can experience the pop culture of Korea.

“We plan to hold more than 2,000 performances at plazas within the mall, so that visitors can enjoy performances not only by big-name stars but also some indie bands, along with B-boy gigs, magic shows and classical concerts.

“Since the response from visitors has been very high, many musicians are approaching us for performance opportunities now, while we had to seek them out at the beginning of this year.”

Some of the merchants also understand that the current setbacks are inevitable with COEX trying to go in a new direction.

“The change in marketing and target customers for COEX should be considered in a larger sense, as the area is now designated as MICE cluster where there are all types of retailers nearby including a duty-free store, department store, hotel, casino and convention center,” said one of the investors in the mall.

“It is crucial for visitors and vendors to understand that we all need to strive to bring the new identity to COEX Mall so that it can become the center of this new hangout place like it once was,” he said, adding that patience might be necessary.