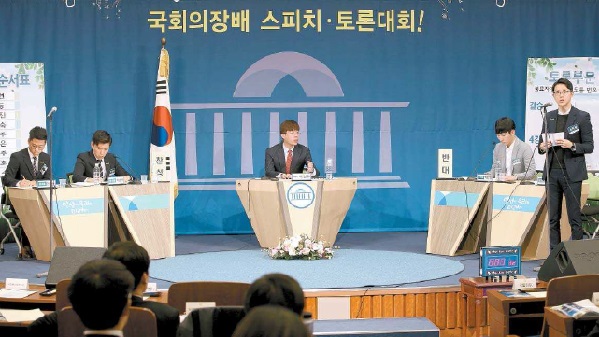 Song Hee-kwon, a student from Yonsei University, second from right, makes his final remarks during the final round of the speech and debate tournament hosted by the Korean National Assembly and the JoongAng Ilbo. [PARK JONG-KEUN]

Park Min-young believes that having the courage to communicate and learning to understand others helped her heal from the domestic violence she experienced at home as a young girl and her parents’ subsequent divorce.

Over the past year, the 22-year-old has actively worked to apply those lessons in her life, and on Wednesday, she emerged as one of the winners in a months-long speech and debate competition hosted by the Korean National Assembly and the JoongAng Ilbo.

“Even though every single day of my life was tough, I became mentally strong thanks to those hardships,” she explained during the awards ceremony.

The debates revolved around arguments for and against the topics “Death With Dignity,” regarding legal euthanasia, and the “Filial Responsibility Law,” which mandates that adult children in Korea support their impoverished parents or relatives.

Park lived with her two siblings at her grandparents’ house from the age of 8 due to her father’s violent tendencies and alcohol abuse.

“Whenever my parents fought, I left home and spent days at the jjimjilbang [sauna],” she said, adding that she dropped out of high school during her second year.

“After I entered university, I took a temporary leave for two years to make a living,” she said. “I felt a lot of resentment toward my mother, and the conflicts between us grew since my parents divorced.”

However, her life began to change once she joined a debate club earlier this year.

In arguing for and against both sides of the same topic, she began to understand her mother’s perspective. The two began to communicate more, and over time, their relationship has improved.

Park practiced debating with her friend, Song Hee-kwon, 22, and together, the two won the debate tournament, showcasing their brilliant teamwork.

From the quarterfinals to the final, the team won over the audience with their unbiased and balanced logic.

In the debate over the Filial Responsibility Law, they took the opposing side and argued in favor of inherent human morality to defeat their opponents from Chungnam National University, who claimed that government intervention was necessary to protect the basic human rights of older parents.

“Even though law and order are guardians of justice, they cannot create true filial responsibility. Legal disputes instead impose long-lasting damage on family relationships. That’s why I am against the Filial Responsibility Law,” Park said in her closing remarks, as the audience burst into applause.

Meanwhile, in the speech competition, Jo Yeo-joo, 23, emerged as the winner, expanding on the conflicts she had with her father as a teenager in addressing the theme “Personality.”

But once she began volunteering in 2012, she said, she started to reflect on the grace she received from others.

“Only after giving up on the hatred I felt toward my father was I able to understand his life,” Jo said.