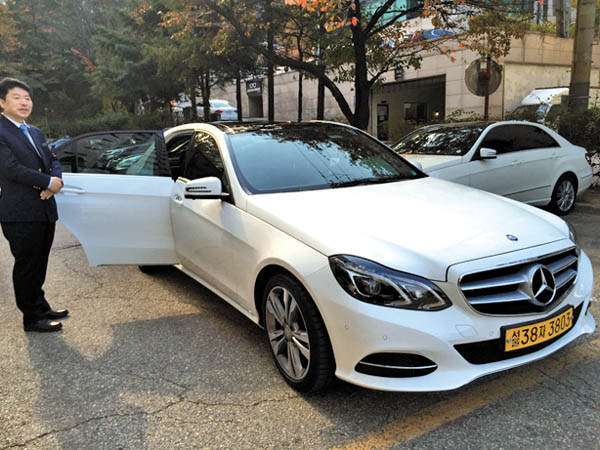 A uniformed Kakao Black driver waits outside a sleek Mercedes-Benz C-class for our reporter. [SEO JI-EUN]

Three days after Kakao launched a premium taxi-hailing service, I decided to enjoy the treat of a chauffeured ride to work in a luxury-brand car last Friday morning.

I upgraded the KakaoTaxi app on my iPhone to add the Black feature, but one step remained: entering my credit card information. It would automatically be linked to KakaoPay, a mobile payment system run by the operator of Korea’s most popular mobile messenger, KakaoTalk.

A Kakao spokesman later told me that not all credit card issuers have sealed deals with KakaoPay but that the range of cards will be expected to grow over time. Credit cards issued overseas are currently not eligible, so people with certain cards will not be able to use KakaoTaxi Black.

The KakaoTaxi app has four types of taxi services. Only Black allows automatic in-app payment, just as Uber does.

Once you’re all set up, the app automatically recognizes your location. You need to input your destination by either searching for an address or dropping a pin.

Then, I was given four vehicle types to choose from: mid-size, large, mobeom (a premium black cab) and Black, the luxury choice I was looking for. After picking Black, an estimated fee for the ride popped up. The app said it would cost between 23,800 won ($20.50) to 26,100 won to go from my house in Cheongdam-dong, Gangnam District, to the Korea JoongAng Daily office near Seoul City Hall within an estimated 40 minutes.

Instantly after the “request” button was pressed, a horizontal bar at the bottom of the screen displayed the driver’s full name, his profile picture, license plate number and the car’s brand. I got a Mercedes-Benz! (Other models used by KakaoTaxi Black include Hyundai’s Equus and Genesis sedans.) A message also informed me, “You will be charged a fee of 8,000 won if you cancel after completing a reservation.”

That led me to wonder what would happen if I typed in a wrong address or if an emergency forced me to cancel the booking. I learned later from a Kakao spokesman that customers are penalized 8,000 won if they cancel within five minutes of booking. The 8,000 won is equivalent to a flag-fall for the Black taxi, compared to 3,000 won for a regular taxi.

The driver instantly called to say he would arrive in five minutes. Unlike with Uber, the location of KakaoTaxi Black taxis does not show on the app before you book one. Only after placing an order can you locate your taxi.

I rushed out to the yard in front of my house for fear I would either be charged a fine if the taxi got there early or the driver would get impatient and drive away. But apparently, keeping a KakaoTaxi Black taxi driver waiting doesn’t result in any penalty, which is good for customers who are running late but leaves room for abuse of the system, I thought.

Breathless from running down the stairs, I began peering around for a black Mercedes, which was a stereotype that Kakao does not subscribe to. A man in his early 50s in the kind of navy uniform worn by pilots was standing with his hand on the open back door of a white Mercedes-Benz C-class sedan. I climbed in, and he closed the door for me. He double-checked my destination on the Gimgisa navigation app on his Galaxy smartphone. A bottle of mineral water and an iPhone charging chord were waiting for me in the back. The front passenger seat was pulled up to maximize the space in the rear.

“We are now departing for the Korea JoongAng Daily building. Please let me know if there is any inconvenience,” he said. He asked me to wear a seat belt for safety.

The driver was silent throughout the ride. He answered my questions but never started a conversation - a contrast to ordinary taxi drivers who love talking about politics and gossip, and are prone to embarrassing personal questions such as “Are you married?” or “Why are you riding a taxi at such a late hour?”

The driver said he was an ordinary taxi driver before going Black. He went through foreign language and first-aid training to be eligible for the premium service, which guarantees a monthly salary of over 2.5 million won regardless of how many customers are driven in a day. (Drivers of ordinary taxis earn less than 2 million won a month.) He said he drove an average of five customers per day over the previous three days.

On the road, he never cut in to another lane or accelerated excessively to shorten the ride. Clearly, the premium taxi’s priorities are comfort and stability rather than speed. If you’re late for an appointment, I would recommend ordinary taxis.

As the car approached my office, I asked him not to come out to open the back door for me. That was too much of a luxury for me. The fare was 28,300 won, 2,200 won more than the maximum that was estimated because of heavy traffic. An ordinary taxi on the same route usually costs 14,000 won.

The ride was more satisfactory than I expected. But the price was more than double the ordinary fare. I would recommend KakaoTaxi Black for those with good expense accounts or a very special occasion. For me, a medium-income salary earner, there’s little chance I would use it regularly.