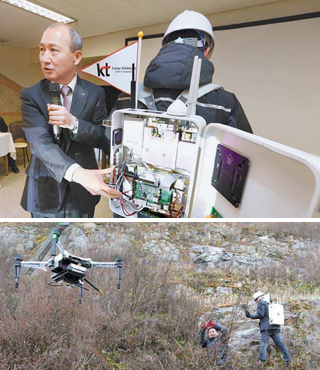 PYEONGCHANG COUNTY, Gangwon - Stranded and injured in a remote corner of the country, a man waves his hands at an empty sky, desperate for someone to see him and send help. His smartphone is useless because he is in an area without network coverage.

Fortunately, an unmanned automated vehicle - more commonly called a drone - soon spots him and sends real-time data about the man’s whereabouts to responders using an infrared camera. Another drone is quickly launched, carrying a mobile Long Term Evolution (LTE) network base station that allows the man to speak with rescuers as they head towards his location.

The scene was a part of a rescue mission staged on Tuesday by telecommunications provider KT, which wants to mobilize similar responses in future situations.

The provider demonstrated new technologies and devices designed to manage natural disasters and other emergencies at Alpensia Resort in Pyeongchang County, Gangwon.

Among the displays were different drones capable of bringing LTE coverage to remote areas or locating missing people, as well as a portable LTE network base station built into a backpack.

The demonstration came as KT has signed a memorandum of understanding with the Public Procurement Service to pilot a safety management project in relatively rural areas, including Pyeongchang, Gangneung and Jeongseon in Gangwon.

Oh Seong-mok, head of KT’s network division and the company’s vice president, said it is particularly important to enhance safety in the region.

“Pyeongchang is where the 2018 Pyeongchang Winter Olympics will be held,” he said, “So, managing emergencies and safety is a key issue. The advanced technologies will aid rescue works and facilitate network services even in a remote area.”

The pilot project will take place over seven months and will include the performance of 20 different rescue scenarios.

Tuesday’s demonstration was held at the ski stadium. To generate a genuinely urgent situation, KT cut off all network frequencies from 10 nearby base stations.

Instead, the network-enabled drone, dubbed the LTE Drone, was able to deliver a communications network, equipped with light and small core networking components. The frequencies from the drone can cover up to a 1-kilometer (0.6-mile) radius.

Still, the project is still in the early stages of its development - the drone can only operate for 20 minutes at a time.

A more advanced version of the LTE Drone is under development, with an extended operation time of 40 minutes.

KT also demonstrated a backpack-shaped network base station called Backpack LTE, which provides network coverage wherever a user goes. The solution is intended to offer communications network services in emergency areas where the established system is compromised.

The telecom provider is one of several companies selected to develop different drones and related technology under a pilot project led by the Ministry of Land, Infrastructure and Transport.

Other drones showcased included a model that can fly at high elevations to detect dangerous situations, and another that can carry aid to an area isolated by a natural disaster.