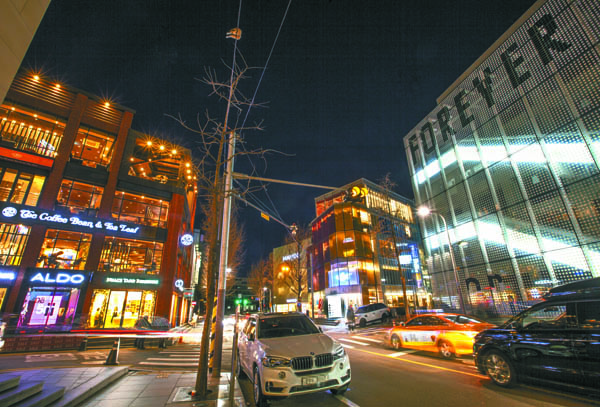 Garosu-gil in Gangnam District, southern Seoul, emerged as an enclave for creative designers, artists and young entrepreneurs before it experienced gentrification. It is now one of the most trendy areas in town, filled with large commercial retailers like Forever 21 and Zara as well as franchise coffee shops like Starbucks and The Coffee Bean & Tea Leaf. [PARK SANG-MOON]

When rents go up, tenants have no choice but to pack their bags and leave or find ways to pay the higher rent. Such a phenomenon affects not only housing residents but also includes those running small businesses in areas that are being redeveloped.

This group includes artists and designers, who are among the most vulnerable victims of so-called gentrification. They find themselves continually displaced from neighborhoods that become commercialized after they settle down and form their own community in what was at first a cheap and quiet area.

As artists flock in groups to relatively cheaper neighborhoods to engage in their work, the neighborhoods slowly begin to attract visitors with distinctive atmosphere and style. Then other businesses are drawn to the area, leading to commercialization. The real estate values rise, and landlords raise the rents. Then the artists and small business get pushed out, and their spaces are replaced with large franchise cafes or fast-fashion brands.

In Seoul, this has happened in Hongdae in Mapo District; Daehangno, Insa-dong, Bukchon and Seochon in central Seoul; and Garosu-gil in Gangnam District, southern Seoul. More recently, Gyeongridan-gil and Haebangchon near Itaewon are seeing a rapid rise in floating population - or people from outside visiting the area - followed by an increase in property values. According to Budongsan 114, which specializes in real estate information, the cost of a month’s rent for a studio apartment there trebled in 10 years, while rents for commercial buildings jumped by up to 650 percent. 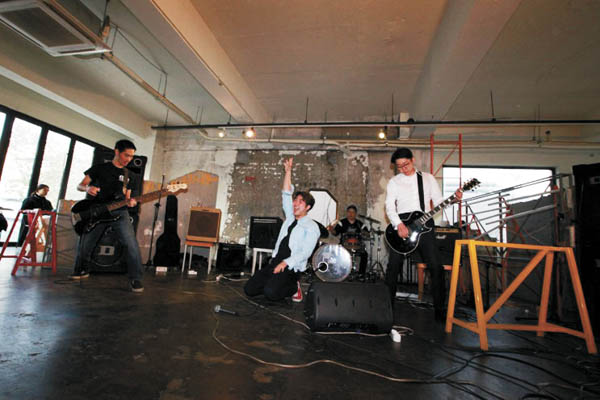 Indie musicians perform at Takeout Drawing in Hannam-dong, central Seoul, during “The Great Asylum” festival to protest against gentrification and the landlord of the building, K-pop singer Psy, who has demanded that the tenants leave. [DALYEORI]

Meanwhile, rents in Seongsu-dong 1-ga in Seongdong District, eastern Seoul - the latest hot spot for young entrepreneurs - increased by 35.3 percent in the past year, while Hongdae also saw a 20 to 40 percent increase.

“In recent years, Korean-style gentrification has mainly involved the displacement of artists and small business owners in areas that have become popular,” said Yim Dong-kun, a professor in the department of geography at Seoul National University. “The more hip the areas become, the higher the land values rise, which leads to the displacement of those who actually made the place ‘hip.’”

Support from the city

In an effort to help such tenants who continue to get pushed out of areas that get popular, the Seoul Metropolitan Government in late November came up with a set of measures to prevent gentrification and help sustain the uniqueness of cultural communities while securing the homes of original residents and small business owners. 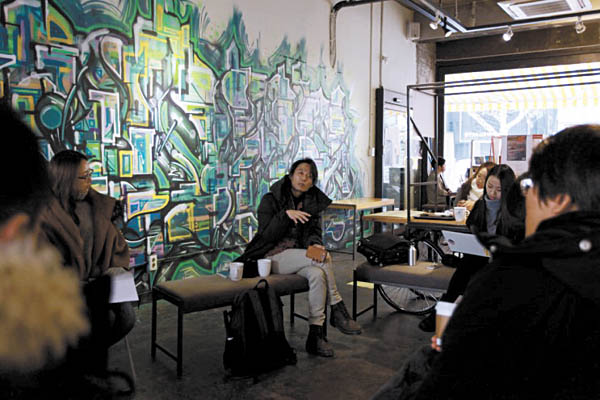 Artists hold a forum on anti-gentrification measures during the festival. [DALYEORI]

In these areas, the city government will push voluntary agreements among landlords, tenants and local government entities such as district offices to refrain from increasing rents. According to such a “Coexistence Agreement,” the landlord should refrain from increasing rental fees and take the lead in protecting the tenant’s premium, while the tenant should refrain from touting on the street. Meanwhile, the district office should help by improving the street environment.

The government also came up with financial measures such as helping tenants who run businesses purchase the real estate they are currently occupying by allowing them to take out a permanent loan at 1 percentage point lower than the market rate. However, it only applies to real estate costing less than 800 billion won ($676 million), and the loan can not exceed 75 percent. By cooperating with Woori Bank, the Seoul government said it may be able to launch these measures at the end of the month at the earliest.

The city government also said it will offer up to 30 million won for renovation to landlords of old buildings if they promise not to increase the rent for some length of time. This so-called long-term relief building system that promises tenants permanent stays without increased rents will also begin as early as next year.

Another measure involves constructing an “anchor facility” by purchasing or leasing real estate in the six “safety zones,” injecting about 20 billion won to offer those tenants on the verge of being displaced a place where they can stay at a low cost without having to worry about getting pushed out once again. 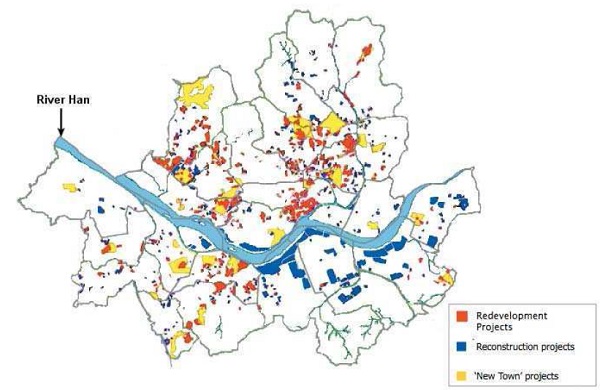 Shin Hyun-bang, an associate professor in the department of geography and environment at the London School of Economics and Political Science, came up with a map to show gentrification in Seoul since the 1980s for a research paper he published early this year. [SHIN HYUN-BANG]

“It’s really good news that the government is finally concerned about us and looking for ways to minimize the damage caused by gentrification,” said a director surnamed Park of a local production company based in Daehangno, who declined to give any further details.

“But I must say that the mall … ,” Park said before stopping to sigh deeply.

“I can’t imagine what it will look like, but I don’t think any production company will want to go and perform there. It’s not attractive at all,” he said. “The charm of performing in Daehangno theaters is that these venues have history, the alleyways coming here embed memories, the whole ambience of walking down the stairs to get to the small, smelly theater underground is a valuable and appealing experience for both audiences and actors. Such an experience is impossible inside a mall of 20 theaters boxed up like a cinema complex.”

According to Gimm Dong-wan, a senior researcher at the Seoul National University Asia Center who specializes in urban planning, “there’s nothing else to say concerning the ‘anchor facility’ measure in Daehangno except that it’s a measure that has been drawn up too quickly.”

Meanwhile, regarding the financial measures such as the long-term relief building system, Gimm said, “Seoul city officials seem to have so much trust in people,” explaining that it’s not easy to control so many concerned parties, that promises can always be broken and voluntary agreements difficult to keep, leaving a high likelihood of disputes.

One example of such a dispute can be seen in the building known as Takeout Drawing in Hannam-dong, central Seoul.

The building, which used to be a public bathhouse, previously served as not only a unique coffee shop that maintained some of the historic features of the building - the chimney on the roof as well as water pipes and stone ceilings - but also acts as a haven for artists, providing them with a place to work, lodge and exhibit. One artist at a time participates in the residency program for two months.

But since early this year, this unique venue also houses a sit-in, with a temporary area installed just outside the building made out of wooden frames and covered with vinyl at night. Takeout Drawing occupies the first two floors of the building.

The venue opened its doors in Hannam-dong in 2010 in hopes of providing a space for artists and creating a complex cultural space in central Seoul. When Takeout Drawing first rented the space, it signed a long-term contract with the landlord, according to Choi So-yeon, one of the three co-founders and owners. But after just a year, the landlord sold the building, and the new landlord wanted the tenants out so that he could remodel the building.

However, the tenants thought they were saved the following year when the landlord was replaced yet again and the plans for remodeling were scrapped. Since the new landlord was music icon Psy, the group thought they would have nothing to worry about, but he soon notified them that he wanted them out in order to rent the space to CJ Group’s franchise coffee chain, A Twosome Place. The tenants have been refusing his request to leave and blocking a series of attempted evictions.

To this day, a group of artists and the owners of Takeout Drawing continue to run the business during the day while keeping guard at night in case anyone tries to kick them out. The two parties are entangled in about 10 lawsuits, and according to Choi, the landlord can come in and force them out at any time, and they know that persisting in the fight is futile. But they want to stay as long as they can in order to let the public know the serious effects of gentrification in Seoul.

Earlier this month, artist Hwang Kyung-hwa, who is currently the resident artist at Takeout Drawing, organized a festival titled “The Great Asylum” at the venue. The festival showcased about 30 programs across diverse genres, including concerts, art exhibitions, graffiti, movie screenings, forums, plays and so on, but it all centered on one theme: that the artists are staying.

“I wanted to show that we are rightful squatters,” said Hwang, who said he had also been displaced from various places, starting with Hongdae. “We must stop such a phenomenon from affecting artists and indie musicians like myself. For musicians and artists, we need affordable spaces like Takeout Drawing, where we can perform and exhibit where the public can easily reach us.”

But the problem is not only that Takeout Drawing is on the verge of getting displaced or that the Seoul Metropolitan Government’s measures are not so helpful, according to Hwang. He says young entrepreneurs and artists in the streets around Takeout Drawing are beginning to sense an increase in the floating population, and that they fear gentrification.

“What we lacked was a network and information exchange between tenants in the neighborhood before we all got displaced,” he said. “It’s important for artists to adapt to gentrification based on other experiences, form communities and alliances with the public sector, and make efforts to maintain their spaces,” Hwang added, explaining that he’s been helping the artists in the area form such an alliance.

Shin Hyun-bang, an associate professor of geography and urban studies at the London School of Economics and Political Science who recently visited Korea for his gentrification research in Seoul, suggested publishing a handbook similar to London’s “Staying Put: An Anti-Gentrification Handbook for Council Estates in London,” which was published in 2013.

“This handbook was written together by a researcher and those who were directly involved in gentrification,” Shin said. “I believe that by forming a task force team together in Seoul, we can publish a series of handbooks for anti-gentrification and minimize the damage caused by this social phenomenon that can’t be stopped.”