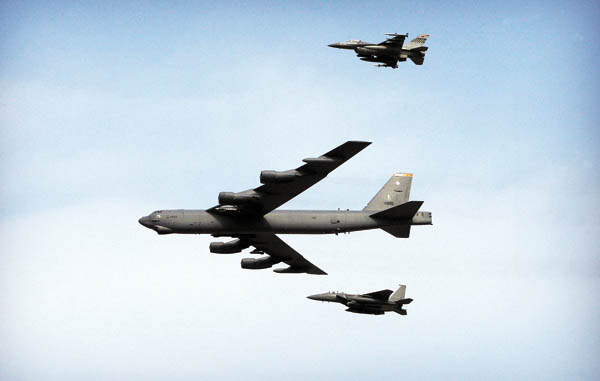 A U.S. Air Force B-52 bomber flies over Osan Air Base in Pyeongtaek, Gyeonggi, on Sunday, in a clear show of force as a Cold War-style standoff deepened between South and North Korea following Pyongyang’s fourth nuclear test last week. [AP/NEWSIS]

South Korea and the United States deployed a U.S. B-52 strategic bomber accompanied by fighter jets over the Korean Peninsula on Sunday in a display of military might in response to North Korea’s fourth nuclear test on Wednesday.

A senior South Korean government official told the JoongAng Ilbo on Sunday that U.S. Defense Secretary Ashton Carter was the one to propose deploying its strategic military assets in a phone conversation with Defense Minister Han Min-koo.

“On the evening of Jan. 6, Defense Minister Han’s phone conversation with Secretary Carter lasted longer than anticipated as they discussed how to respond to the nuclear test,” the official said. “During this conversation, Secretary Carter proposed deploying U.S. strategic assets to the Korean Peninsula.”

Han and Carter held a phone conversation on Wednesday after Pyongyang announced it had conducted its first successful hydrogen bomb test, and in a joint press release, they agreed to close collaboration and said that North Korea should “pay a price that is proportional to the provocation.”

The last time such a flight was publicized in a show of military force to Pyongyang was following the North’s third nuclear test on Feb. 12, 2013, after which the United States deployed both B-52 and B-2 bombers.

Both B-52 and B-2 aircraft can launch nuclear-armed cruise missiles.

But unlike this time, the request to deploy U.S. strategic assets last time was made by then-Defense Minister Kim Kwan-jin, the official said, and the deployments came over a month after the nuclear test.

“The United States actively proposing it this time led to a comparatively quick deployment,” he added. “The United States making public its strategic assets training serves as a strong warning to North Korea.”

The U.S. B-52 Stratofortress long-range, jet-powered bomber and two U.S. F-16 fighter jets took off from a base in Guam on Sunday morning. They were escorted by South Korean F-15 fighters over Osan Air Base in Pyeongtaek, Gyeonggi.

The B-52 was armed with nuclear missiles and “bunker buster” bombs that are capable of bombarding North Korea’s underground facilities, according to Korean and U.S. military officials.

The American aircraft returned to Andersen Air Force Base in Guam the same day, the U.S. military said.

Adm. Harry B. Harris Jr., commander of the U.S. Pacific Command, said deployment of the bomber was a “demonstration of the ironclad U.S. commitment” to its allies in Korea and Japan and called North Korea’s nuclear test “a blatant violation of its international obligations.”

U.S. Forces Korea commander Gen. Curtis Scaparrotti said that such close bilateral military cooperation “ensures we are ready to respond at any time to those who would threaten stability and security.”

This move is in addition to the propaganda broadcasts by South Korea at the border with the North, which were resumed on Friday as a punitive measure against Pyongyang for carrying out a fourth nuclear test.

After a breakthrough deal was reached between both sides at the end of August to put a stop to rising military tensions, the speakers, which blast K-pop songs and announcements critical of the North Korean regime, had been silent for some four months.

In response, North Korea also began blasting its own loudspeaker broadcasts later on Friday, according to the South’s military.

North Korea claimed on Wednesday that it had detonated its first hydrogen bomb, after seismic activity near its nuclear test site in Punggye-ri in North Hamgyong Province was detected by international authorities earlier that day. North Korean leader Kim Jong-un claimed on state media on Sunday that the nuclear test was carried out as a “self-defensive step” to prevent the “danger of a nuclear war” caused by the United States, his first public remarks since the Wednesday test.

The North’s official Korean Central News Agency said that Kim addressed the Ministry of People’s Armed Forces and said the test was its “legitimate right” as a sovereign state.

In response to the fourth nuclear test, there have been increasing calls for China to step up the pressure on the North. South Korean Foreign Minister Yun Byung-se held a phone conversation Thursday evening with his Chinese counterpart, Wang Yi, urging Beijing to sternly respond to North Korea for carrying out the nuclear test.

According to a statement released by the two foreign ministries on Friday, Yun called for a speedy adoption of a UN Security Council resolution with strong measures against Pyongyang through close cooperation between Korea and China.

China is one of the permanent members of the 15-member council and holds veto power.

Yun further emphasized the importance of China’s response in a television appearance on Sunday.

“The Chinese government needs to clearly demonstrate what it has been vowing to the international community during the UN Security Council resolution adoption process,” he said on a KBS program.

“This will be helpful for peace on the Korean Peninsula and Northeast Asia and security in the international community, and will be important because it’s what China has been promising,” he continued, adding that it’s an opportunity for China to show that its declaration of opposition to the North’s nuclear weapons “wasn’t a lie.”

“Both bilateral and multilateral pressure is important,” Yun added. “The U.S. House of Representatives is considering stronger sanctions than ever before.”

However, Chinese Foreign Ministry spokeswoman Hua Chunying said in a briefing on Friday that “China is not the cause and crux of the Korean nuclear issue, nor is it the key to resolving the problem.”