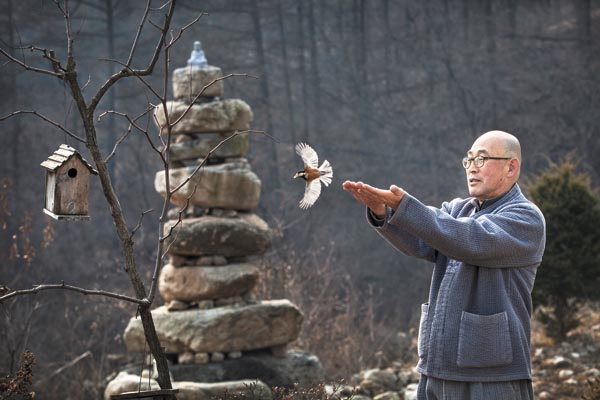 A bird takes food from the palms of Doyeon Sunim at Doyeon Temple located on the slope of Mount Jijang in Pocheon, Gyeonggi. [PARK SANG-MOON]

POCHEON, Gyeonggi - About 40 elementary school children visited Doyeon Temple located on the slope of Mount Jijang, in Pocheon, Gyeonggi, despite the long distance from their hometowns of Gwacheon and Anyang.

They came to hear stories about birds from Doyeon Sunim, a monk at the temple. They listened to every word he said and nodded their heads while he spoke. 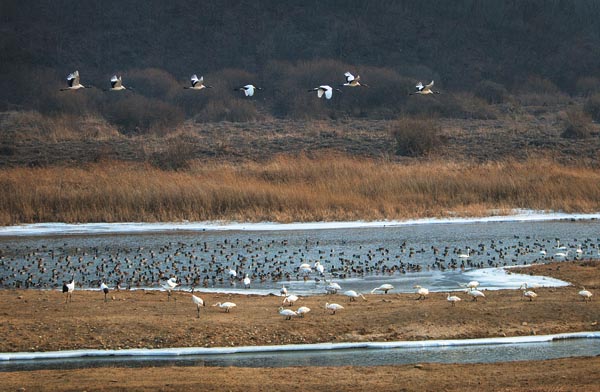 Birds including swans and cranes flock to the Hantan River in Cheolwon Country, Gyeonggi, near Doyeon Sunim’s temple. [PARK SANG-MOON]

“Storks, which used to breed in Korea and Japan, disappeared in around 1970,” Doyeon Sunim said. “The reasons lie in the use of pesticide and chemical fertilizer as well as changes in their natural habitats. Before their extinction in Japan, the Japanese authorities initiated artificial breeding by bringing birds from Russia. Later, Japan began releasing storks into the wild in 2005 and two of the wild-born baby storks crossed the sea and came to Korea.”

This is the story of how storks came to live in Korea again, as told by Doyeon Sunim, who loves birds and tries to live like them.

“Storks feed themselves with fish, amphibians and insects in the wetlands and rice paddies,” he continued. “Therefore, if the paddies are polluted, the storks will lose food to eat and finally disappear. In this sense, is it okay for us to eat rice which was produced in paddies without the storks? Humans might repeat the fate of the birds and disappear, won’t we?”

After he introduced the bird, his story went on by reading from a book about ecology, titled “Grandmother and the Storks,” which he wrote.

Doyeon Sunim’s life began not unlike many others in Korea, as he had had a secular job for 10 years after graduating college. However, he decided to quit his job that involved fierce competition and converted to Buddhism.

However, he found being a monk even more difficult: life at the temple was even stricter, more intense and more hierarchical. Later, he realized that such hardship in the temple was not the important part. The temple life had its own essence.

2. Children listen to Doyeon Sunim tell stories at the temple. 3. Doyeon Sunim returns to his temple after taking photographs of birds. [PARK SANG-MOON]

He moved here and built Doyeon temple, inspired by Bubjeong Sunim’s words that practicing the real Dao - the Buddhist concept of enlightenment or doctrine - is possible by being alone. That was 16 years ago. He attained freedom by living alone and becoming part of nature. He studied plants, flowers and trees, finally moving onto birds. While spending time with them, he learned that birds have “genuine freedom,” he said.

“The birds taught me the valuable lessons that could not be taught by 8,400 Buddhist writings,” Doyeon Sunim said.

Storks (Natural Monument No. 199) and cranes (Natural Monument No. 202) are his main subjects of interest. Storks are known for their strong familial ties and the cranes are known to be quiet and calm all the time. They are the symbols of a clean environment. They run away from any sign of pesticide, and they can live only when ecological diversity is guaranteed. This means that places where they visit are proven for their ecological safety.

4. Eagles gather in a rice paddy in Cheolwon. 5. A stork catches a fish. [PARK SANG-MOON]

These days, Doyeon Sunim is concentrating on protecting the storks and improving the environment. He has visited the places where the birds have settled and made a map regarding their activities in their habitats according to his detailed records. A few days ago, he also looked around several locations where the storks might live such as Cheonsu Bay and Yesan County, South Chungcheong, and Gimhae and Hadong, South Gyeongsang. He also named the two storks that came to Korea from Japan Bongsuni and Jaedongi.

Doyeon Sunim takes pictures of these nonmaterialistic, flying creature in order to show the world their beautiful souls. “Birds sing ceaselessly, telling people to emulate them,” he said. “They always stay by humans and greet us every morning. They tell us not to destroy the environment and throw away trash thoughtlessly. They tell us that we should love each other. I learned all of these lessons from birds. Birds are Buddha.”