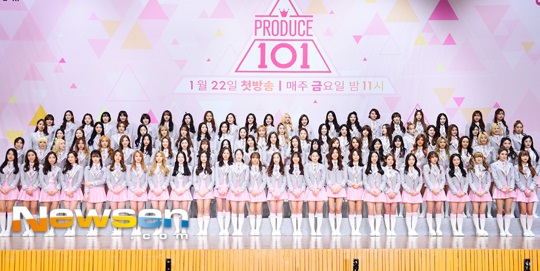 The new audition show “Produce 101” features 101 trainees from 46 entertainment agencies across the country who will compete with each other to be part of an 11-member girl group. [MNET]


Since the 2009 launch of “Superstar K,” the country’s very first TV audition show, the genre has had ups and downs.

“Superstar K” was successful on Mnet and spawned similar shows by other broadcasters, but only two - “Superstar K” and “K-pop Star” - have survived the tough competition.

Since the format of such shows is all too common these days, audition shows are no longer exciting to viewers, which is where the new show “Produce 101” comes in.

By featuring 101 female trainees from 46 entertainment agencies, “Produce 101” will depict the journey of the singer-hopefuls, until viewers finally choose 11 trainees for a project girl group. The group will debut in April and will perform through the end of the year.

“We’ve been preparing this show over the past two years,” said Han Dong-cheol, a chief producer for the show, during a press day event on Thursday.

Han has produced popular music shows such as “Unpretty Rapstar” and “Show Me the Money.”

“We have no judges. The final winners will be selected 100 percent by the viewers. And we believe the viewers have an ear for music,” said Han.

Kahi, a former member of After School, is one of the mentors on the program. When asked whether the winners might be chosen for looks rather than talent, she said, “Today’s music consumers have a high standard, and I believe they won’t cast their votes only for pretty faces.”

She is joined by rapper Cheetah and JeA, a member of the girl group Brown Eyed Girls. Actor-singer Jang Keun-suk will host the show.

“I usually do dramas in Korea, but I do concerts more than 150 times a year overseas so I accepted an offer [from this show] because I thought I could give guidance to the participants of this show,” said Jang.

Among the trainees, the youngest is 13 years old and the oldest is 28. Some have just begun their training while others have been at it for more than 10 years.

“Many K-pop boy groups are doing really well overseas, but I personally thought we don’t have girl groups that can compare to boy groups,” said Han.