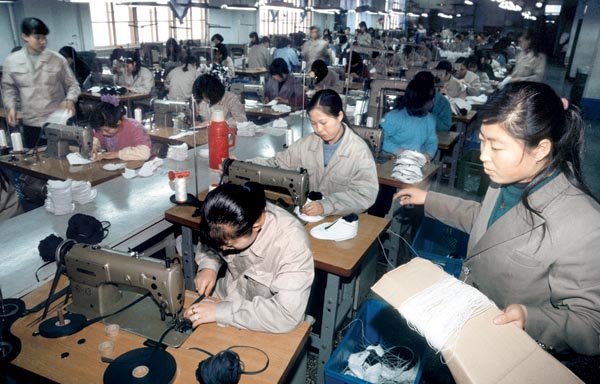 North Korean laborers work at a textile factory in the Chinese city of Dalian in Liaoning Province. [JOONGANG PHOTO]

Companies in three northeastern Chinese provinces are vying to recruit as many North Korean workers as they can to capitalize on cheap labor costs - moves that run counter to the international community’s efforts to impose further economic sanctions on North Korea following the country’s fourth nuclear test early this month.

Chunwoo Textile, a company based in Dandong, Liaoning Province, lost 100 of some 300 workers last year to factories operating in other provinces because wages were much higher there.

China’s northernmost provinces of Liaoning, Jilin and Heilongjiang reputedly offer much cheaper wages for labor-intensive workers compared to other regions.

“The local economy centers on heavy industry, and with a lack of quality jobs, many workers have left the province in recent years,” said Kim Hyun-cheol, the owner of Chunwoo.

It is estimated that about 100,000 people leave China’s northernmost provinces annually in search of better working conditions, with better salaries, which has led to a shortage in manpower.

The labor shortage prompted Kim to look for an alternative last year in the form of North Korean workers.

“They have a relatively strong work ethic and demand cheap wages. The fact that they’re not entitled to health insurance is also an advantage for me as a manager,” Kim said, adding that he plans to hire more North Korean workers this year.

Chunwoo pays each of its North Korean employees about 2,000 yuan a month.

But the lack of manpower has also attributed to lackluster economic performances in the area.

According to official data released by the National Bureau of Statistics of China, annual economic growth in the three provinces ranged between 5.8 percent and 6.5 percent in 2014, behind the national average of 7.4 percent over the same period.

The local economies in northern China are heavily reliant on economic planning by the central government but started to decline in 2013 after reaching their limits. The decline across all three provinces came after years of economic growth, thanks to financial aid and an outlined blueprint for development from Beijing.

The exodus of workers in the region also comes at a time when the area economy is mainly focused on manufacturing, which generally requires more labor than other sectors.

To offset the shortage, the three provinces reached an agreement with North Korea last year in which Pyongyang agreed to send over 5,000 workers annually.

Estimates now gauge that up to 40,000 North Koreans are currently working there.

Pyongyang makes between $140 and 170 million per year by exporting labor to those provinces - that’s nearly twice as much as the average $86 million per year that the 54,700 North Korean workers at the Joint Kaesong Industrial Complex bring in.

“The total number of North Korean workers in China, including those not covered by official data, is estimated to be around 100,000, which brings the North Korean regime $1 billion in annual revenue on average,” said Cho Bong-hyun, a senior research fellow at the IBK Economy Research Institute.

Experts say Pyongyang will likely try to capitalize on cheap labor exports to China with its exports of mineral products to China now on the decline.

“China is expected to cut back on its imports of mineral resources from North Korea amid a slowing economy and environmental problems,” said Kim Suk-jin, a researcher at the Korea Institute for National Unification, adding that the dilemma would motivate Pyongyang to send more workers abroad.

Such close business cooperation could also make it difficult for Beijing - North Korea’s long-time ally - to join in international efforts to impose additional sanctions on Pyongyang following its most recent nuclear test on Jan. 6.

“Because Beijing’s top priority in its North Korea policy is to maintain the Kim Jong-un regime, rather than resolve the nuclear issue, China is likely to tolerate the North’s persistent irrational behavior,” said Liu Xing, a professor at China University of Political Science and Law.