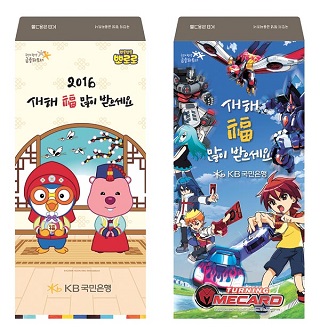 One of the most celebrated traditions during the Lunar New Year holiday is for adults to hand out money to children as a New Year’s greeting, also known as giving sebae money.

With the holiday now only a week away, local banks this year have decided to upgrade the tradition by offering twists on the tradition.

KB Kookmin Bank is providing envelopes for sebae money decorated with popular children’s cartoon characters such as Turning Mecard and Pororo to customers who visit brick-and-mortar stores starting Wednesday. The bank will also be giving out actual sebae money to 111 randomly chosen young customers who sign up for any financial product, including savings accounts, labeled part of the “KB Junior Life Collection.” Another 100 youngsters will be given popular children’s toys.

The bank also said every single branch will hand out Pororo piggy banks to its first 90 customers during the holidays.

“Children can build the good habit of saving money by adults helping them to deposit their New Year gifts to the newly opened accounts,” said a representative for KB Kookmin Bank.

Woori Bank started to operate its temporary “mobile sebae money” service on Monday. Customers can send sebae money or gift cards to someone without having to know their account number by using the bank’s mobile app “Wibee Bank.”

KEB Hana Bank is selling a package consisted of foreign currencies including a lucky $2 bill, euro note and Chinese yuan, among others.

The package will come in two options. The first will cost around 20,000 won ($16.60), while the second will cost around 36,000 won. The final price will be decided the day of, based on the most recent exchange rate.

Hana Financial Group will also be having an event called “May you have a rich new year,” to celebrate two million customers having signed up for its membership service “Hana Members.”

The group will give out “Hana cash” gift certificates worth 1,000 won to 714 customers each day who send more than 10,000 won in the certificates to someone else.

The group will also offer an 80 percent discount on currency exchange fees to those who open new accounts by the end of this month.