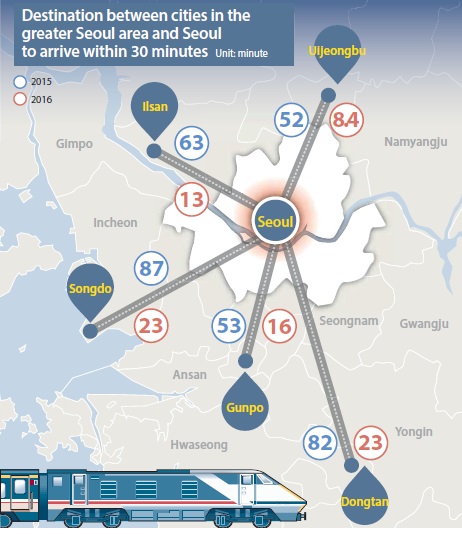 The government plans to build high-speed rail lines in a 74.1 trillion won ($62.2 billion) project to connect major cities in the four corners of the peninsula by 2025, cutting travel time between the cities to under two hours.

The goal of the high-speed lines is to reduce heavy traffic that has been a constant problem during every major holiday, including Lunar New Year, or Seollal, and Chuseok, Korea’s Thanksgiving.

The high-speed train is expected to have a huge impact on the connected cities’ growth and their property markets.

The Ministry of Land, Infrastructure and Transport earlier this week announced plans for the high-speed rail that would allow the train to travel at a speed of up to 300 kilometers per hour (186 miles per hour) or faster. Several existing rail lines will be upgraded to allow a quasi-high-speed train that is under development to run at a maximum speed of 250 kilometers an hour. 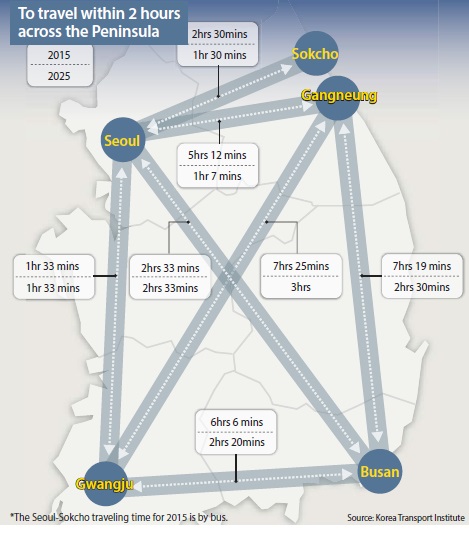 One of the first moves that will be taken under the plan is to finish the connection between Gwangju and Mokpo, both cities in the South Jeolla region. This is the second phase of the Honam KTX line. Incheon, Suwon and Uijeongbu, all in the outskirts of Seoul, will be connected to the nation’s capital.

Outdated rail lines along the central and southern regions of the peninsula will also be upgraded.

It currently takes more than five hours to travel from Seoul to Gangneung, Gangwon, on the east coast by train. That travel time will be cut back to one hour and seven minutes. The time it takes to travel from Busan to Gwangju on the opposite site of the Peninsula will be reduced to two hours and 20 minutes from the existing six hours and six minutes.

“The central areas within the peninsula that were not easy to travel to by train, such as Jecheon [in North Chungcheong] and Yeongju [in North Gyeongsang], will reached within a time that saves more than two hours,” a Transport Ministry official said.

The government plans to install train tracks in the northern Gangwon areas that lack transportation infrastructure. Seoul and Sokcho in Gangwon will be connected through a new line that travels between Chuncheon, the Gangwon capital, and Sokcho and then connects to an existing line between Seoul and Chuncheon, also known as the Gyeongchun line.

Once this line is completed by 2025, Seoulites can travel to the popular beaches in Sokcho in only one hour and 30 minutes. That will save an hour from the two hours and 30 minutes it takes to travel to the same cities by bus, currently the only transportation option available.

The government also plans to upgrade the southern and central regions, including the lines connecting Gimcheon, North Gyeongsang, and Geoje, South Gyeongsang; and Jochiwon, South Chungcheong, and Bongyang, North Chungcheong.

Construction of a rail line connecting the west coast and east coast will be pushed forward so that foreign travelers arriving at Incheon International Airport can travel to Gangneung in just an hour and 50 minutes and visit Pyeongchang for the 2018 Winter Olympics.