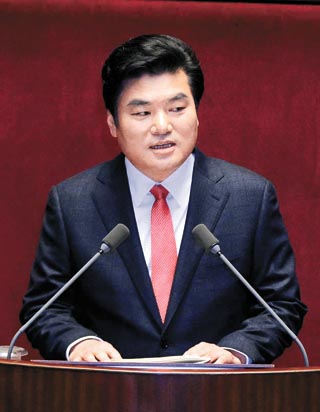 Rep. Won Yoo-chul, the Saenuri Party floor leader, addresses the legislature on Monday as leader of a negotiation group inside the National Assembly. [NEWSIS]

The floor leader of the conservative ruling party on Monday openly demanded a nuclear-armed South Korea, stressing that the time has come for the country to consider atomic weapons and longer-range missiles as effective deterrence against Pyongyang.

“Considering North Korea’s nuclear [and missile capabilities], we need to think about our own survival strategy and countermeasures that include peaceful nuclear and missile programs for the sake of self-defense,” said Rep. Won Yoo-chul, the floor leader of the Saenuri Party.

“We cannot borrow an umbrella from a neighbor whenever it rains,” he continued in an address Monday morning at the National Assembly. “We must be prepared and wear our own raincoat.”

Won made the speech as the leader of a negotiation group in accordance with the legislative schedule agreed upon by the ruling and opposition parties last week.

His counterpart from the main opposition Minjoo Party of Korea is scheduled to give an address on Wednesday.

The Saenuri floor leader added that it was crucial to build a shield to protect the country amid its current security crisis, prompted when North Korea carried out its fourth nuclear test on Jan. 6, and later launched a long-range missile earlier this month.

“The time has come for us to seriously consider effective and substantial measures of self-defense and deterrence against North Korea,” Won said.

Won proposed bringing back tactical nuclear weaponry from the United States - removed following the 1992 Joint Declaration on the Denuclearization of the Korean Peninsula - or developing South Korea’s own temporary nuclear arsenal as possible options.

Although Won and other conservative politicians in the ruling party have stressed the need for defensive nuclear armaments, his latest remarks were interpreted to be deliberate given that he made them before the legislature in his official capacity as floor leader.

He also urged China to use its influence to strong-arm North Korea instead of objecting to Seoul’s decision to host the U.S.-led Terminal High Altitude Area Defense (Thaad) antiballistic missile system.

The Thaad battery is an easily transportable defensive weapon system that protects against incoming threats, specifically tactical and theater ballistic missiles with ranges of 200 kilometers (124 miles) and altitudes of up to 150 kilometers.

Placement of the Thaad system in Korea has been controversial because it comes with a powerful radar system that can cover more than 1,000 kilometers, which China and Russia have argued could potentially be used as a method of surveillance against them.

Seoul and Washington agreed earlier this month to deploy a Thaad battery in Korea as a means of deterring threats from North Korea.

The government said Monday, however, that it is not considering nuclear weapons.

“Currently, the government is not considering this option,” Defense Minister Han Min-koo said in a hearing before the Assembly’s National Defense Committee. “We are paying close attention to the demand because we believe the argument was made to express public outrage over North Korea’s nuclear development. But the government’s position remains unchanged.”