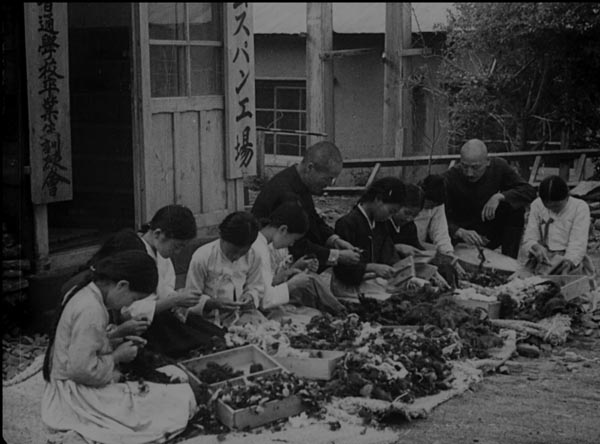 The film entitled, “Sheep From the North Speak,” shot during the Japanese colonial era, shows Koreans weaving cloth out of wool. The film is significant in that it sheds light on Japan’s economic policy at the time and its plans to breed sheep and plant cotton on the Korean Peninsula. [KOREAN FILM ARCHIVE]

Recently discovered film footage from the 1920s and ‘30s that focuses on Japan’s policy of exploitation during its colonial rule over the Korean Peninsula (1910-45) was unveiled this week by the Korean Film Archive.

The organization announced Thursday during a press conference that the seven short films, found in Russia and Germany, expand upon cultural aspects of the time as well as Japan’s economic plan to breed sheep in the north of the country and plant cotton in the south - part of efforts by Tokyo at the time to produce industrial raw materials via cheap labor.

The short films are significant given that much of the information regarding Japan’s colonial rule over Korea was mostly damaged or destroyed just before its defeat in World War II, thus serve as rare visual records of Japan’s economic policy on the peninsula.

In 2010, two of the films were discovered in a Russian archive among a massive collection of files categorized as Asian data. The rights to the films proved difficult to pinpoint, however, since they were not officially Russian property. An announcement of the results of the ongoing evaluation was then deferred until 2015, after similar footage was found in Germany.

One of the films found in Russia was created in 1934. Titled in Korean as “Sheep From the North Speak,” it details Japan’s sheep-breeding policy in modern-day North Korea, including how the animals were imported from Australia, with a map of sea transportation routes.

How the three trade routes were formed and utilized in the North - they were located in Cheongjin, Najin and Unggi (Seonbong, in the present day) - are also recorded in detail.

The other, an untitled seven-minute film, concerns an exhibition from Oct. 21, 1924, in Hwanghae Province, what is now modern-day North Korea, about stockbreeding.

The exhibition, a major commercial event where products were aggregated in the market place and evaluated, helps shed light on livestock policy at the time and its economic importance.

The five other films found in Germany, meanwhile, expand on cultural aspects in Korea during the 1920s and ‘30s. They include in full-length “In the Land of Morning Calm” (1927) and “The Korean Marriage,” directed and recorded by Norbert Weber, a German Benedictine monk, in 1925 when he visited the Korean Peninsula.

A shorter, edited version of “In the Land of Morning Calm” was released on DVD in 2009 in Korea. However, that was before the original version of the film was discovered in Germany in 2014, along with four others.

They are valuable, historians say, for their detailed depictions of the market place in Baeogae - now Dongdaemun - as well as wedding and funeral ceremonies. The seven short films will be screened publicly in commemoration of the Independence Movement Day on March 1 in the Cinematheque KOFA, located in Sangam-dong, Mapo District, western Seoul.