For your next getaway, stay at a hanok hotel

For your next getaway, stay at a hanok hotel 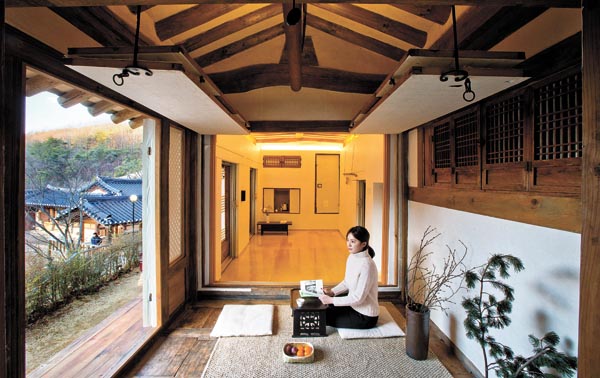 Popular among both overseas tourists and Korean people are hanok, traditional Korean houses. Hanok and the surrounding ambiance of traditional-style villages in places like Jeonju, North Jeolla, are prime tourist attractions.

However, at the end of the day, hanok are meant to be homes. Ironically, hanok seem to fall short in their primary role as dwellings.

From 437 in 2011, the number of hanok accommodations across the country increased to 767 in 2013, according to the Ministry of Culture, Sports and Tourism. In total, hanok accounted for 17.5 percent of all accommodation facilities nationwide.

But despite their availability, hanok are not very popular as travel accommodations. The old-fashioned structures fail to make visitors feel comfortable, with bathrooms that are often located in separate buildings from the main sleeping rooms, thus requiring a trip outside. They also tend to have no beds, so guests must sleep on mats on the floor.

With their updated facilities, modern hanok have earned the moniker “hanok hotels.” Built last year in the Songdo International Business District, the Gyeongwonjae Ambassador Incheon is a hanok hotel that caters to the latest lifestyles. The hotel rooms include bed and bath, and an embedded heating system replaces the traditional floor heating used in hanok, while double-pane glass windows replace traditional paper windows to keep out the cold and noise.

Today, travelers have many different hanok hotels, residences and resort options to choose from. Gurume Resort in Andong, North Gyeongsang, is a hanok resort with modern amenities. Seven old houses that were destined to be buried underwater due to the Andong Dam construction in 1976 were recycled to make the hanok cluster at the resort.

“When I was relaxing in a hanok enjoying the view of nature, I was constantly being disturbed by fellow guests walking to get to the bathroom,” said the interior designer of Gurume Resort. “That’s when I realized it needs to be designed so that the guests’ privacy can be respected.”

Thanks to these endeavors, which have included building attached bathrooms, the resort has become one of the most sought-after accommodation facilities in the area.

In addition, many other modern hanok accommodations have been opening their doors nationwide. Hanok are no longer just for looking at.

Here are the six latest hanok accommodation facilities across the country.


Hanok in an urban forest

Registered on Unesco’s list of Intangible Cultural Heritage, carpenter Choi Gi-young built the Gyeongwonjae Ambassador Incheon with the objective of creating the most prestigious accommodation in Incheon.
The Incheon Free Economic Zone invested about 50 billion won ($40 million) in the five-star hotel, and it had its grand opening last May. The royal suite, at 150 square meters (1,615 square feet) in size, is the hotel’s signature room. The room features two beds, a bathtub and a sauna, which guests can enjoy along with unrivaled views of Songdo’s skyscrapers. The global hotel operator Ambassador manages the facility, which runs a hotel tour program a 10 a.m. every day. Rooms start from 330,000 won per night.
Gyeongwonjae Ambassador Incheon: (032) 729-1101
200 Technopark-ro, Yeonsu District, Incheon
gyeongwonjae.ambatelen.com

A special suite at a special hotel

The Seamarq hotel is known for its commanding view of Gyeongpo Beach and its sophisticated exterior design. But the highlight of this five-star hotel is the hanok annex, Hoanje.
The hanok grants views of the ocean and sky, which attracted much attention at the time of its opening. Although it is officially labeled as a suite, Hoanje is more like a mansion. Consisting of a main room, an outbuilding and a guest room, the whole cluster occupies 275 square meters.
The main room and outbuilding are used as bedrooms able to accommodate a maximum of eight guests, and the guest room is big enough for a small banquet. Hoanje costs 13 million won per night.
Seamarq Hotel Hoanjae: (033) 650-7000
406 Haean-ro, Gangneung, Gangwon
www.seamarqhotel.com/hoanjae


Guesthouse in the heart of Seoul

Goi is a hanok created by three art students. One of the houses in Bukchon Hanok Village in central Seoul has been updated but maintains traditional hanok elements intact, including the front yard and toenmaru, the narrow wooden porch.
Guests can use the whole house instead of just one room. Although the house is a bit small, the ceiling is 2.5 meters high. Dishes, tea cups, vases and other crafts designed by young Korean artists decorate the rooms. The kitchen and washing machine make the stay all the more comfortable. Like Goi’s motto, “A house in Seoul for my friends from overseas,” 70 percent of guests are foreigners, and half of them stay for at least three days. The house can accommodate two adults and one child and costs 220,000 won per night.
Goi: (070) 4116-8633
13-12 Bukchon-ro 11-gil, Jongno District, Seoul
www.goiseoul.kr


A night with history

Gurume Resort consists of seven traditional houses built during the Joseon dynasty (1392-1910). A hanok called Chilgok, built by a descendent of famed scholar Yi Hwang in the 1800s, and six other houses were on the verge of being submerged due to construction of the Andong Dam. But fortunately, they were relocated. From 1975, SK Group and the city of Andong transformed the derelict houses into a resort, which opened in 2014. Each house can accommodate up to 16 people and features a modern bathroom. The hanok have refrigerators but no TVs, and guests are served breakfast. The rooms start from 120,000 won per night.
Gurume Resort: (054) 823-9001
190 Minsokchon-gil, Andong, North Gyeongsang
www.gurume-andong.com

Ragung is a hanok hotel opened within the Shilla Millennium Park, a historical theme park, in 2007. Modeled after a Silla dynasty (57 B.C. to A.D. 935) palace, Ragung resembles the buildings at Anapji Pond, where kings once held banquets. Ragung’s atmospheric lighting is reflected in the surrounding pond. The 16 hanok that make up Ragung have more than 100-meter-long corridors in between, providing guests an opportunity for special walks. Every room has an outdoor hot tub where guests can enjoy alkaline water pumped up from 600 meters below ground in privacy. A stay costs 330,000 won per night and includes breakfast and dinner.
Ragung: (054) 778-2000
55-12 Expo-ro, Gyeongju, North Gyeongsang
www.smpark.co.kr

The hanok that was used to build the Joseonwangga inn was a company’s guesthouse until 1976, when it was sold to its current owner. In the process of disassembling the house to move it from Seoul to Yeoncheon, Gyeonggi, a document about the house was discovered. The red silk said the house’s name was Yeomgeundang and that it belonged to a grandson of Emperor Gojong (1852-1919). The house was reconstructed in 2011 as a hotel with 16 rooms. The hotel offers guests the opportunity to try cultural activities like flying wish lanterns (5,000 won) and making soap (7,000 won). The hotel also has a swimming pool and camping site. Rooms start from 176,000 won.
Joseonwangga: (031) 834-8383
339-10 Hyeonmun-ro, Yeoncheon-eup, Yeoncheon County, Gyeonggi
www.chosun1807.com