A dangerous place for Koreans

A dangerous place for Koreans

Lee Chang-ho, vice chairman of an association of Koreans in the Philippines, and a local police officer patrol Korean Town in Angeles City last month to prevent crime. [OH JONG-TAEK]

There is growing alarm over the steady number of Korean nationals killed in the Philippines in recent years.

A 68-year-old Korean retiree was stabbed to death in his house in the province of Cavite in the Philippines on Feb. 22.

The man, surnamed Park, was found dead in his home by neighbors who called the local police. The victim had been living alone in the Philippines for over six years after retiring from his position as a professor at a regional university in Korea.

Cavite is a favorable spot for retirees. It is close to Manila and boasts of many golf courses.

Five Korean police officers dispatched to the Philippines reviewed CCTV footage and arrested as a key suspect a young Philippine woman who entered Park’s house that day. They are investigating her motives.

Over 1.2 million Korean tourists visit the country each year.

Since 2013, 34 Koreans have been killed in the Philippines. The figures break down to 11 murders last year, 10 in 2014 and 13 in 2013. Korea’s National Police Agency sent four officers to the Philippines to investigate the fatal shooting of a 57-year-old Korean national last December.

Mr. Kim, a 50-year-old who has been doing business in the Philippines for the past 20 years, said, “It has gotten to the point where we should be saying ‘K-Crime’ instead of ‘K-pop.’” 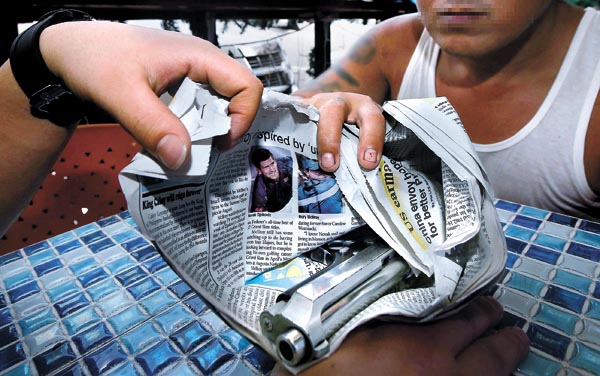 A gun wrapped in newspaper obtained last month by a special reporting team in the Philippines. It took a phone call and 20 minutes to have the gun delivered by a young man to a cafe in downtown Manila on Feb. 4. [OH JONG-TAEK]

The JoongAng Ilbo conducted an investigation between Feb. 1 and 5 into Koreans killed in the country over the past three years in regions including Manila and Angeles City with the cooperation of the Korean Ministry of Foreign Affairs.

According to the analysis, the “Local Koreanos” lived in the Philippines for an average of 7.3 years. Their average age was 48.7 and they were mostly men. Some 64.7 percent, or 22 of these victims, were self-employed businessmen. The others included six unemployed individuals, two used car salesmen, two programmers, a foreign currency exchange businessman and a student.

Most of the cases occurred in Metro Manila, Cavite and Cebu, the country’s second most populous city.

“Among the Korean murder cases, there were no tourist victims and the victims were all residents who had settled here,” said Seo Seung-hwan, a 39-year-old superintendent with the National Police Agency’s Korean Desk in Manila. “In 15 cases, the motive for the murder was a business quarrel or a conflict or grudge stemming from money issues.”

The Korean Desk was established in May 2012 and normally one officer works in Manila and a second in Angeles. But recently four additional officers were dispatched to the country.

On Dec. 20, a 56-year-old man known by his surname Cho was fatally shot in Batangas, some 100 kilometers (62 miles) south of Manila. He lived in the country 20 years and operated his own construction and real estate leasing business.

Two thirds of the murders were committed with guns. It is legal to possess a firearm in the Philippines. There are also some 1 million illegal firearms in circulation.

Contract killings are common. “Even if the gunman is captured,” said Hong Deok-gi, an official with the Korean Embassy in the Philippines, “if there is financial backing behind the crime, he will never confess who was the mastermind.”

According to the Ministry of Foreign Affairs, of the 35 Koreans killed overseas last year, 11 were killed in the Philippines, the highest for any single country. 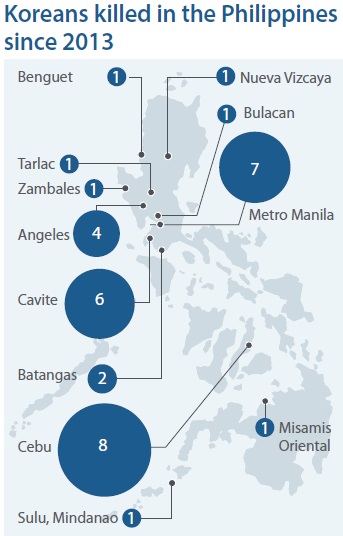 There were 9,945 cases of Filipinos killed in the country in 2014. The murder rate is ten times as high as Korea, which had 938 murder cases that year.

The Philippines has a population of some 100 million people and a ratio of one police officer per 140,000 people. The number of police officials in the country is similar to Korea’s, which has only half the population.

“When a crime occurs in the Philippines, police officers have to pay for their own gas to investigation,” Lee Ji-hoon, 33, superintendent of the Korean Desk in Angeles said, “That is how weak the drive to investigate a case is.”

Some Koreans living in the Philippines have a reputation for a “Mayabang,” attitude, Tagalog for conceited. That can be a deadly situation.

In April 2013, a 34-year-old surnamed. Yim and two acquaintances were shot by assailants as they left a restaurant in Angeles City, a tourist destination north of Manila. The murder was linked to Yim’s former driver.

“There were a number of cases in which a Filipino bore a grudge toward the arrogance of a Korean,” said Shin Kyung-seo, a consular official with the Korean Embassy in the Philippines, “and they committed robbery or hired a hitman to secretly kill the Korean.”