Head down south for the first blooms of spring

Head down south for the first blooms of spring 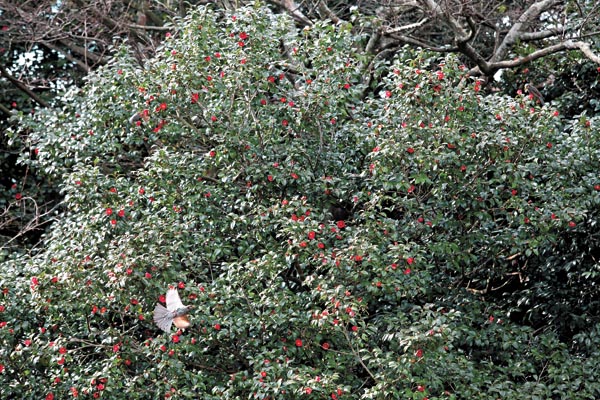 In a forest of camellia blossoms, a bird suddenly appears, contrasting with the beautiful red scenery. Spring has come to Seyeonjeong, a garden built by Yun Seon-do (1587-1671) on Bogil Island, located in Wando County, South Jeolla. [CHOI SEUNG-PYO]

Camellia flowers have begun to bloom abundantly on the southern islands of Korea, announcing the arrival of spring. Two of these islands each have unique and attractive factors, which make them perfect for spring getaways.

One of the two islands is Suwu Island in Tongyeong, South Gyeongsang. The other is Bogil Island in Wando County, South Jeolla.

Suwu Island is a small and quiet island located inside Hallyeohaesang National Park. There are neither cars nor convenience stores on the island, and there are very few people, as not many tourists know about the place. However, every spring, camellia flowers - known as dongbaek in Korean - visit the island, lending a reddish hue to the landscape. Thus, some people call the island Dongbaek Island.

Bogil Island is another popular destination for tourists who want to experience spring a bit earlier than in other parts of the country. Camellias blossom along the pathways, so visitors can stroll along and enjoy the sound of waves from the Mongdol Beach. There is a garden built by Yun Seon-do (1587-1671), a government official from the Joseon Dynasty (1392-1910) who is renowned for his literary masterpiece “Eobusasisa.” 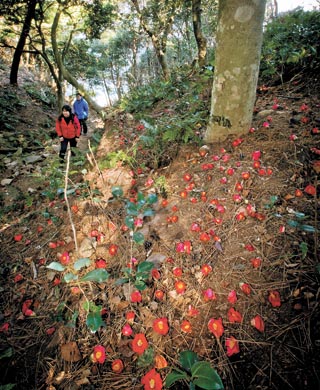 Suwu Island in Tongyeong, South Gyeongsang, is nicknamed Dongbaek Island, as it is covered in camellia trees. Dongbaek means camellia flower in Korean. In the middle of March, the whole island is dotted with red blossoms. [LIM HYUN-DONG]

It is time to welcome the arrival of spring after a long, cold winter. Warm weather, ocean spray and bright red flowers come together to make these small islands must-see travel spots.

Not many people have heard about this island. Other islands in Hallyeohaesang National Park such as Jisim Island and Nae Island tend to get more visitors. These days, though, many backpackers visit the island, especially in the spring. Of all these southern islands, Suwu Island sees spring begin first.

From Samcheonpo Port in Sacheon, South Gyeongsang, it takes only 30 minutes to reach the island. The island is only 1 square kilometer (247 acres) in size.

“Suwu Island is also called Dongbaek Island,” explained resident Kim Young-geun. “Su is a Chinese character meaning tree, which indicates camellia trees. Wu is a word defined as cow, since the shape of the island resembles a cow.

“The only mountain in the island, Mount Eunbak, is covered with camellias,” Kim added.

In the middle of the island, there is a small town consisting of only 23 families. There are quite a lot of deserted houses, along with a small school that has been closed since 2008. The school will be transformed into an accommodation facility this summer. Next to the school is a little temple with a shrine dedicated to General Seol-un, a figure in local legend who protects the island from Japanese invasion.

The Ministry of the Interior designated Suwu Island as “an island to visit” in 2014. Thus, the island will sooner or later be outfitted to accommodate more tourists.

Already the temperature there is 5 degrees Celsius (9 degrees Fahrenheit) higher than in Seoul, and it feels like spring. Camellia tree flowers blossom along the pathways from the town to Mongdol Beach.

Left: The highest point of Suwu Island is the summit of Mount Eunbak at 189 meters (620 feet). Right: A mural of children is painted on the side of a house on the island. [LIM HYUN-DONG]

“This is just the beginning,” Kim said. “In the middle of March, the whole island is covered in red.”

Following the trails toward Mount Eunbak, one can see why the island is called Dongbaek Island. Camellias bloom along the ridge, which is 189 meters (620 feet) high.

At the top of the mountain, a warm breeze blows, lifting away the chill of winter.

Although Suwu Island is included in the administrative district of Saryang Island in Tongyeong, boats from Tongyeong do not go to Suwu. A boat leaves from Samcheonpo Port in Sacheon twice a day, at 8:30 a.m. and 4:40 p.m. Tickets cost 5,000 won ($4.20) for adults. Visitors cannot bring cars to the island.

It takes about three hours to walk around the entire island. There are no restaurants or convenience stores, but food is available at guesthouses. The Dongbaek Guesthouse costs 50,000 won a day. Call (055) 855-0771 for more information.

A boat from Ttangkkeut Dock in Haenam County, South Jeolla, to Sanyang Dock on Nohwa Island takes only 30 minutes. From there, just cross Bogil Bridge to reach this scenic island.

Seyeonjeong is the highlight of the island, as it is one of the top three gardens in Korea. It was created and cared for by Yun Seon-do when he stayed on the island. He originally planned to go to Jeju Island, but after he found Bogil Island, he decided to stay. After spending years as a government official and time in exile traveling to several other places, he returned to this island and stayed until his death at the age of 85.

Left: Seyeonjeong on Bogil Island is one of the top three gardens in Korea. Right: A local hangs seaweed, which is in season during the springtime, up to dry. [CHOI SEUNG-PYO]

“Did you come from Seoul? Try some abalone. You don’t have to pay,” a elderly woman in front of the Seyeonjeong entrance offered.

The abalone cooked in soy sauce and the laver or seaweed - both local specialties - created a harmonious flavor. It was all the more delicious alongside the generosity of a local.

Spring has engulfed the garden. From the entrance, a sea of camellias can be seen. The flowers fallen on the ground create a red carpet, and the pond, Seyeonji, shines under the sun, exuding a greenish-blue color.

Yun is an important historical figure, particularly for his artistic and literary works. Yun Chang-ha, a cultural tour guide as well as 10th-generation descendant of Yun, emphasized his respectability.

“Yun Seon-do was a great official of the Joseon Dynasty,” the guide said. “He was a genius in both the fields of art and science.”

It is possible to understand his ingenuity by looking at the garden. The pond does not flood even after heavy rain, thanks to a small dam constructed along the pond. Stones unearthed while digging the pond have been used as sculptures. These creative ideas place the garden among the top three in the country.

Buyong-ri is one of the rare places on Bogil Island where field farming is possible. Going up the mountain, one can find a hidden garden, named Dongcheonsoeksil, that creates an illusion of paradise.

The island is mostly covered in deciduous forests that, because the temperature does not drop below freezing, are always green.

To get to Bogil Island, you can take a boat from either Ttangkkeut Dock or Hwaheungpo Port in Wando County to Nohwa Island. Then, cross Bogil Bridge to reach the island. From Ttangkkeut Dock, boats depart every 30 minutes, and from Hwaheungpo Port, they leave once an hour. The trip takes 30 to 40 minutes. Tickets cost 6,500 won ($5.40) for adults, and 18,000 won for a car.