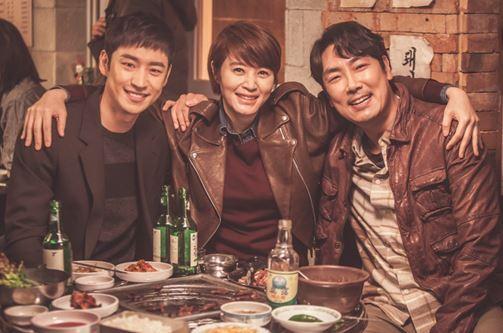 The megahit tvN drama “Signal” wrapped up Saturday with high marks from fans.

Not only the plot of the drama, but also stellar performances by the three stars was given credit for the drama’s popularity.

The trio of stars - Kim Hye-soo, Cho Jin-woong and Lee Je-hoon - are all looking to carry on their momentum, this time on a different stage: the big screen.

Speaking to his popularity, Cho will be everywhere. The actor is set to appear in three movies, including “The Handmaiden” and “Blue Beard” (working title).

Veteran actress Kim Hye-soo is busy filming “Precious Woman” (working title). Playing the lead role, Na Hyun-jeong, the leader of a criminal organization, Kim will showcase her charisma that was apparent in “Signal.”

Making his comeback to the big screen after three years, Lee Je-hoon will play detective Hong Gil-dong, a fictional character in a Korean novel written during the Joseon Dynasty (1392-1910). The film, “Phantom Detective,” features the immaculate detective searching for a man he had failed to find.