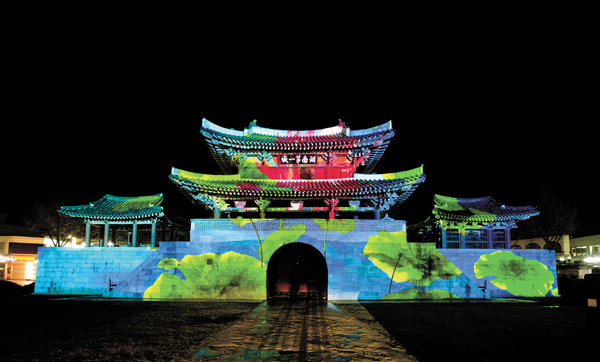 The Jeonju Hanok Village is usually considered a place that people visit during the daytime to check out traditional Korean homes and pick up souvenirs.

But the city in North Jeolla, in collaboration with the Korea Creative Content Agency, has stepped in to show that there is more to enjoy in the village even after dark.Right across from the hanok (traditional Korean home) village, a gigantic 47-by-16.2-meter (154-by-53-foot) screen has been set up in front of Pungnam Gate (Treasure No. 308), the southern gate of Jeonju Castle. This media facade uses the gate as its canvas on which to play different videos that highlight not only the beauty of the gate itself but also other traditional culture.

On the screen, a dragon flies over the peaceful hanok village from the Joseon era (1392-1910) and rises to the sky, followed by scenes of people doing a performance and break dancing. “Pungnam Gate Wears Lights” started earlier this month and will last until July. The shows start every Thursday and Friday at 9 p.m. 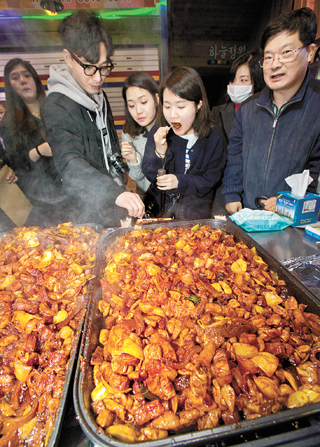 The media facade aims to draw more visitors to the hanok village at night. The village, which welcomes about 9.6 million visitors a year, is packed during the day but quickly turns into a ghost town after dark, since many of the facilities and stores close at 6 p.m. The city of Jeonju and the Korea Creative Content Agency together invested 650 million won ($556,000) into the new project over the past year to let visitors better enjoy nighttime in the city.

In fact, such efforts to combine video art and a historical landmark is not new. The media facades set up at the Sydney Opera House in Australia and the Sagrada Familia cathedral in Spain are globally famous. Other Korean structures have pursued similar projects, including Deoksu Palace and Gyeongbok Palace in Seoul.

The video performance at Pungnam Gate is about 10 minutes long. It features the landscape of Jeonju when it was the capital of Hubaekje, or Later Baekje, during the Later Three Kingdoms era (892-936) alongside the contemporary graffiti art and break dancing.

“Pungnam Gate was simply a place anyone passed by to get to the hanok village, and I didn’t know that the gate was so pretty,” said 25-year-old traveler Im Su-min. “It seems like the wall of the castle is alive and dancing.” 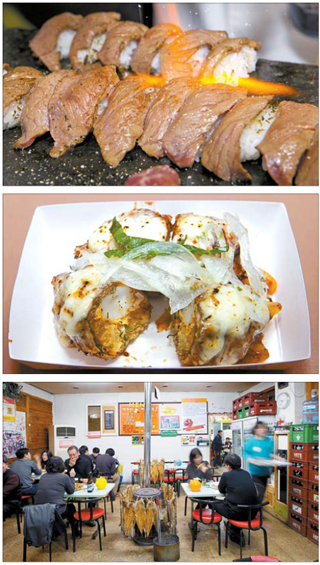 One of the most popular dishes is beef sushi from Chongakne Sushi. Second from top: JigeulJigeul Pot sells a grilled vegetable dish. Above: At Yeongdong Supermarket, customers can order beer alongside simple food.

Omokdae, which is about a 10-minute walk from Pungnam Gate, is another spot where visitors can check out the nightscape of Jeonju. It is located on the hilltop where the Goryeo-era general Lee Seong-gye threw a party to celebrate after he defeated invading Japanese forces in 1380. Not only is the wooden structure comfortably lit up, it also offers great views of the landscape of Jeonju below. Of course, any nighttime stroll should include some tasty food. Friday might be the best time to visit for those who want to enjoy delicious food after watching the video performance. A night market set up at Jeonju Nambu Market, right next to Pungnam Gate, is open every Friday and Saturday.

The best part about visiting the night market is the snacks. Of the roughly 32 stalls set up at the night market, 22 stands sell something to snack on. The most popular stand is Chongakne Sushi, which roughly translates to Young Man’s Sushi. Six people who studied at Jeonju University’s cooking school sell rice rolls with beef for 900 won apiece, and there is constantly a line at their stall. 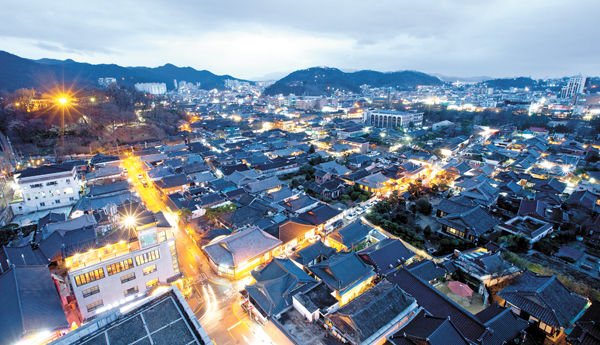 Nearby, Ajimson Bulgopchang Galbi sells pork skin, pork intestines and pork belly together for 5,000 won. Many also stop by to pick up food to go.

One of the dessert options is Isulcream, which almost sounds like ice cream. This stand sells ice cream made with sul, alcohol in Korean, such as dark beer and makgeolli (rice wine), for 3,000 won. For those seeking something more exotic, there is Thai food on offer as well.

Meanwhile, there are many bars for those looking for a sit-down drinking experience. Gamaek, which are supermarkets that also let patrons sit down in the store and drink beer, are popular in the area. Near the hanok village, Jeonil Supermarket sells half-liter beers for 2,200 won, along with various dishes such as rolled eggs for 6,000 won and grilled squid for 13,000 won. 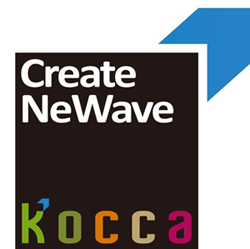 Since two people can enjoy a plate plus two bottles of beer for only 10,400 won, many visitors come here after touring the hanok village. The supermarket sells around 24,000 bottles of beer each month, the highest number of alcohol sales recorded in Korea by a single store, according to the alcohol company Hite Jinro.

Yeongdong Supermarket, which has been running for 26 years, has more food options. Besides what’s available at Jeonil, Yeongdong sells hot pepper chicken for 13,000 won and fried chicken intestines for 10,000 won.