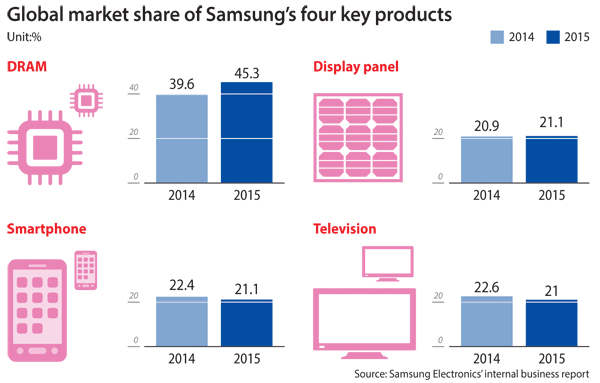 Samsung Electronics’ four key products saw mixed results when it came to global market share last year, according to an annual business report by the company released on Friday.

In smartphones, once the segment that generated the largest share of sales and profit, Samsung Electronics posted 21.1 percent, a 1.3 percentage point decrease compared to the previous year.

Competitors such as Apple in the premium price range and Xiaomi and Huawei in the budget range have cut into Samsung’s take in the segment.

Demand for smartphones has also shown tepid growth in China, as well as in the United States and Europe.

Low demand apparently affected the volume of smartphones produced. In 2014, Samsung manufactured a total of 440 million devices, falling to 423 million in 2015.

Samsung’s share of the global smartphone market peaked at 26.8 percent in 2013, when competition was less intense.

Prospects for this year are far from rosy, as market saturation is expected to slow demand further.

Televisions showed a moderate fall, from 22.6 percent in 2014 to 21 percent last year. The world’s largest TV manufacturer managed to retain the top seat last year, but it has since faced headwinds. The economic slowdown in countries like China and the popularity of online and mobile on-demand TV services have kept TV manufacturers on edge, lowering demand for TV sets.

The number of televisions produced by Samsung decreased 16.8 percent, from 55 million in 2014 to 46 million last year, according to the report.

But last year was not all about dim numbers.

As the top DRAM producer in the world, Samsung further expanded its global market share to 45.3 percent, a 5.7 percentage point jump compared to 2014. In 2013, its share stood at 36.7 percent.

“The chip business could face negative factors due to the slow growth of smartphones and the lowering of demand for mobile devices,” the report noted. “Still, the need for high-capacity storage systems in server and other storage devices will drive growth.”

The report also cited the Internet of Things and autonomous vehicles as positive factors for sales of DRAM chips.

The report noted that Samsung still maintained dominance in organic diode light-emitting (OLED) panels for smaller devices, though competition in the display industry has been getting fiercer. Chinese manufacturers pose the biggest threat with their price competitiveness and generous support from the government.

Despite the challenges, Samsung has managed to maintain over 20 percent global market share in all four products since 2013.