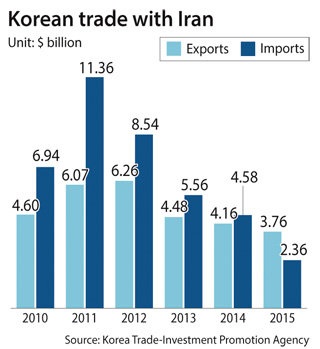 Keeping up trade relations between Korea and Iran has, for the past six years, been Lee Jae-hyuk’s raison d’etre. The assistant manager of Woori Bank International Trade Service Center, he was assigned to a team that maintained Korea’s only trade window to Iran when Korea joined the U.S.-led alliance of economic sanctions on the Middle Eastern nation.

Lee and his boss even managed to sit down with Peter Harrell, the former deputy assistant secretary for counter threat finance and sanctions at the U.S. State Department, during one of Harrell’s visits to Korea. Lee wanted information that could help him rescue a troubled machinery parts maker whose 10 billion won ($8.7 million) export deal was on the verge of failure due to legal complications.

“Deputy Assistant Secretary Harrell contacted the Office of Foreign Assets Control [OFAC] himself,” Lee recalled in an interview with the Korea JoongAng Daily on Monday. “We were able to hear back from the agency that it was safe for us to go through with it. It would have taken a much longer time if we were to contact OFAC by ourselves, and such delays may have jeopardized the deal.”

Woori Bank had discovered, among the Iranian partner’s records, suspicious documents involving the Islamic Revolutionary Guard Corps, documents that may have caused the United States to consider the deal a violation of sanctions. If the bank proceeded without checking, the won currency payment and settlement system, the only means by which trade transactions could be conducted between Iran and South Korea under sanctions, may have faced being shut down.

Now that the sanctions have been lifted, exporters as well as local financial institutions are gearing up to do business, and Lee says that the efforts made by his team to maintain trade relations over the years seem to finally be paying off.

“We expect that Korea will have advantages over other countries,” said Oh Se-yoon, a deputy general manager on Lee’s team, “since we have built close relationships with our Iranian counterparts during the six years of sanctions.”

Korea was one of the few countries around the world that continued to trade with Iran during sanctions, given that the country imported or relied somewhat heavily on Iranian crude oil. Iranian consumers also remained interested in importing manufactured goods from Korea.

Both state-run and commercial banks are expecting handsome profits, as local manufacturers and builders either expand their exports to Iran or open offices there. More businesses mean more customers, as well as a greater rate of currency exchange and increased profit from payment transaction fees for local financiers.

“The two countries need each other,” Oh said. “Korea imports crude oil, and Iranians are interested in buying locally manufactured products such as home appliances and smartphones. This is why we were able to successfully continue to trade with each other even during sanctions.”

Under sanctions, Koreans were only allowed to trade with Iranian companies and the Iranian government through Woori Bank and the Industrial Bank of Korea. All transactions were calculated in Korean won, and all payments took place in Seoul. Furthermore, according to the Korea Strategic Trade Institute, all payments made by Korean oil buyers were deposited at these two Korean banks under the Iranian central bank’s account, so that Tehran could then use the money to purchase Korean goods from within Korea (as it could not be withdrawn).

The two governments recently reached an agreement to jointly operate a payment system in financial products, tariffs and taxes. Korea will also help build future payment systems for other currencies such as the yen and the euro. State-run banks in the two countries will cooperate to establish credit lines worth $200 million, and the Export-Import Bank of Korea will offer economic development cooperation funds to infrastructure projects in Iran.

The Iranian market will also open its doors to nonbanking institutions such as insurers and brokerage firms, as the two governments also agreed on jointly developing insurance and financial investment products. The CEO of the Iranian Securities and Exchange Organization visited Seoul in March to cooperate with the Korea Exchange and build modern, electronic securities exchange systems in Tehran.

One official at KB Kookmin Bank also said they are negotiating with major banks in Iran in order to be ready, just in case they will be able to do trade with Iranian counterparts using the yen or the euro.

“We have also established a new team that will specifically work on the two countries’ trade-related issues,” the official said.

Moreover, the government announced that it will do its best to help local companies and financiers enjoy doing business in Iran.

“Major sanctions targeting Iran were lifted more than three months ago,” Choi Sang-mok, a vice finance minister, said at a meeting held last week with major companies and financiers. “But Korean companies entering the new market are not doing as well as they had expected. Trade and investment are not actively being made yet, due to a delay in making agreements on the international payment system.

“The government will now try to negotiate with the United States and Iran to speed up the agreement process, and will expand our support to exporting companies and government-run banks while we continue to work on negotiations to come to a final agreement.”