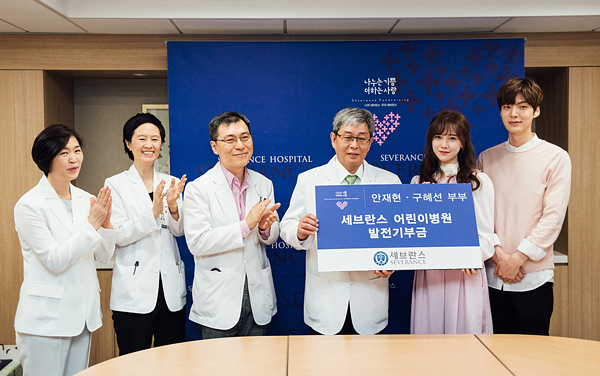 Actress Ku Hye-sun and actor Ahn Jae-hyun had a special wedding event at the Severance Hospital of Yonsei University in Seodaemun District to celebrate their union as a married couple.

Instead of holding a wedding ceremony, the two decided to donate the money they would have spent for a wedding to the hospital, which they visited on Saturday.

The couple, who started their relationship after taking part in the medical drama “Blood,” became aware of the many children struggling to fight illnesses at the hospital when they came to the hospital to film scenes. After debating how to help them, the newlyweds decided to donate to the hospital instead of having a wedding ceremony.

“We learned the value of living for someone else thanks to each other, and we wanted to do something meaningful as we get married,” said the couple, according to Ku’s agency YG Entertainment Saturday.

“We wanted to give hope and courage to young patients who struggle so much to fight their illness.”

The hospital said it will use the donated fund to research child diseases and create a rest space at Severance Children’s Hospital.