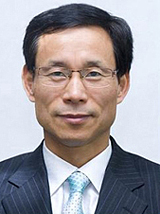 LEIPZIG, Germany -- Korea will take over the presidency of the International Transport Forum (ITF) in 2018, and will host the annual summit in May 2019.

On the second day of the 2016 ITF, all 57 member countries unanimously agreed Korea will take over the presidency of the forum after Mexico and Latvia.

In addition, the Korean transport minister will chair the 2019 summit, which will invite transport policymakers and influential industry figures from around the world.

Choi Jeong-ho, Korea’s vice transport minister, sat down with the Korea JoongAng Daily in Leipzig on Thursday to celebrate the appointment.

“Chairing the forum will serve as a significant opportunity for Korea to introduce its well-established public transportation system to the world,” Choi said. “Also, the decision is meaningful in that Korea’s status in the international transport community has been elevated.”

Since Korea became a member of the ITF in 2007, the country’s transport ministers and government officials have shown constant interest in the world’s biggest transport body by continually participating in the annual event.

The news is even more significant since the ITF leadership has been seeking to globalize the institution further, going beyond the European territories by letting in more non-European member countries.

“Member countries are praising Korea’s transport policy measures,” the vice minister said. “While transport policies are centered on single-occupancy vehicles in western countries, ours have long been focusing on the public transportation system, which turns out to be friendly to the environment.”

Korea’s Intelligent Transport System (ITS), which tracks the movement of public buses and subway trains and notifies passengers of arrival time, is being exported to Colombia. The ministry plans to export the system to a number of other countries, as well.

Although Korea will host the 2019 summit, it will take place in Leipzig. The ministry is planning to bring Korean carmakers and transport-related businesses to Germany to give them the chance to demonstrate their cutting-edge technologies and services.

“K-food, K-culture and K-transportation could be a possible theme, enabling us to give participants a chance to experience Korean food, culture and transportation services,” the official said.

“Since it is a huge global trend to go green and be smarter, we won’t move away from that, but we will come up with a more detailed theme later on.”

Through aggressive deregulatory moves, Korea has set a goal to commercialize autonomous driving from 2020.

“Autonomous driving could be a part of the theme, too,” Choi said. “We are going to remove regulations to make both cars and roads smarter and enable communications between one vehicle and another.”

Korea has already succeeded in developing precise GPS systems and a road map as part of the effort to accelerate the materialization of autonomous driving in the country.