Chen Huixian isn’t your typical Chinese tourist to Korea. When she makes one of her eight annual trips, the 27-year-old does not spend a penny.

“Half of my visits to Korea are sponsored,” she said.

The internet star has some 740,000 followers on Weibo, the most-used microblogging website in China, and 170,000 followers on the mobile messenger WeChat. Young and fashion-conscious Chinese bloggers like Chen have become the primary target of Korea’s retailers due to their growing influence on Chinese consumers.

Major department stores have subsequently launched programs to host these influential bloggers and let them write about the experience on their social networking sites. 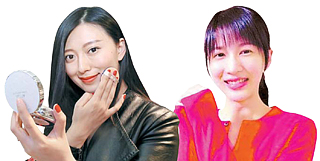 “About 10 million online users read my posts through different social networking channels, including Weibo, blogs and other smartphone apps,” she said.

Chen is part of a group of 10 people who came to Korea by invitation of the retail group Aekyung. They stayed in Korea from May 6 to May 9, during which Aekyung covered their airfare, accommodations and shopping expenses.

The group tried out cosmetic products by Aekyung and spent 1 million won ($845) in shopping vouchers at the group’s shopping malls AK Plaza and AK&.

“The number of combined followers of the 10 bloggers is five million,” said Kang Young-bok, head of marketing at Aekyung. “And about 150 million people online browse 10 communities frequented by the bloggers.”

Aekyung is not alone in courting powerful internet celebrities. Lotte tried a similar marketing scheme in 2010, when Lotte Department Store invited twin fashion bloggers Wei Dan and Wei Qing to Korea. The department store chain has since hosted a group of famed Chinese bloggers every year.

“The exposure rate of the bloggers’ posts is five times as much as that of other advertising methods.”

Shinsegae Department Store also saw the strategy do the trick after it organized an invitation last May.

“[After the program,] the number of followers on Shinsegae’s Weibo page increased by one million in a month,” a source at Shinsegae said.

The growing influence that internet celebrities have on Chinese consumers has given birth to marketing companies specializing in connecting popular online personalities and Korean retailers.

One such company, 2AB, took on an intermediary role between the cosmetics firm LG Household & Health Care and stars in China’s blogosphere. After one review about O HUI, one of LG’s beauty brands, the site garnered over 100 million views.

But there is a standard price list shared among those companies that varies depending on factors such as how many fans they have on their blogs.

“We categorize the bloggers into four levels,” said Kim Nam-young, a chief operator at 2AB.

“The highest class is what we call the ‘seller level,’ where the influence of individuals is comparable to that of TV celebrities,” Kim said. “The next level is made up of what we call ‘key opinion leaders,’ or KOL. The following levels are simply known as levels A and B.”

Kim noted that people known as KOL are paid 5 million won on average, but even in the same category, prices can range from 3 million won to 10 million won.

In addition to Korea, the United States and European countries have also spotted the commercial potential associated with online personalities from China.

Chen, for example, visited over 30 cities in the United States and Europe last year. The products she wrote about included cars, watches, hotels, beauty products and restaurants.

Zhou Qianhan, who came to Korea as part of the program by Aekyung, only focuses on cosmetics.

“Chinese people value originality,” she said, “People are also interested in who advertises the products and how popular it is in Korea.”

When asked how much she made through her blogging, she declined to specify the amount. But to the question of whether it is more than 100 million won, she nodded.

Still, industry sources call for scrutiny when choosing bloggers as a marketing instrument.

“One should not simply look at the number of followers,” a source at Shilla Duty Free said.