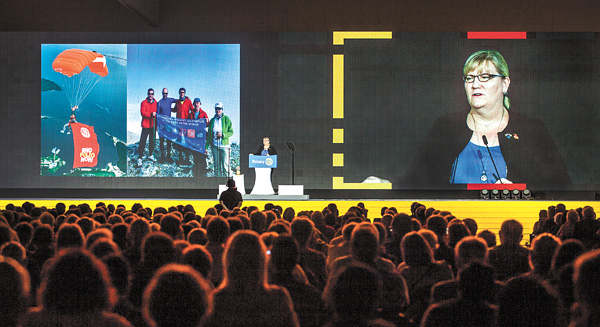 In their third general session of the five-day Rotary International Seoul Convention, club members marked milestone events and accomplishments, one of them being the 99.9 percent eradication of polio.

Rebecca Martin, director of the Center for Global Health at the U.S. Centers for Disease Control and Prevention (CDC) updated the tens of thousands of Rotarians gathered Tuesday at the Korea International Exhibition Center in Goyang, Gyeonggi, on the latest accomplishments in polio eradication efforts.

“Since developing PolioPlus, first in the Philippines, Rotary has remained at the forefront of the eradication efforts,” Martin said. “In the last three decades, we have seen astonishing progress. Polio cases have declined worldwide by more than 99.9 percent. We are closer to eradicating polio than we have been at any point in history.”

PolioPlus, the first global vaccination program for polio, was established in 1985 by Rotary International. Rotary spearheaded the efforts to establish a public-private partnership for eradication of polio, which in 1988 materialized into the Global Polio Eradication Initiative (GPEI). The partnership now involves the World Health Organization (WHO), United Nations Children’s Fund, U.S. Centers for Disease Control and Prevention, Bill & Melinda Gates Foundation and national governments.

“Since GPEI was created, there have been 15 million cases of paralytic polio prevented and more than half a million deaths averted,” Martin said.

Polio is a virus that spreads through human contact and can lead to paralysis, usually in the legs. In 1988, polio reportedly paralyzed more than 1,000 children every day. Children under the age of five are known to be most vulnerable to this disease, which is incurable but vaccine-preventable.

“For the first time ever, the entire African region is approaching two years of being polio-free,” Martin said to the crowd, whose applause filled the auditorium.

As it takes a complete three-year period of no polio detection in a region for the WHO to declare it polio-free, efforts to sustain the current state of zero polio case in Africa continue.

Afghanistan and Pakistan are the only countries where the spread of wild poliovirus has never stopped. There are now 16 cases of polio infection in the two countries.

Although close to their goal of complete eradication of the disease, which will be second only to the eradication of smallpox by WHO in 1980, the road ahead is not an easy one for Rotary and its partners.

“Insecurity remains a challenge which requires strong skills in negotiating and working with new partners to deliver vaccines while keeping all polio workers safe from harm,” Martin said, in regard to military strife in Afghanistan and Pakistan.

As an innovative solution to reach children in regions under conflict, the GPEI parties started to recruit women volunteers to find children using their own local networks.

“The recruitment of the Female Community Volunteers in high threat areas has led to a major breakthrough,” Martin said. “These female volunteers are vaccinating in their communities and reaching an increasing number of children previously missed.”

In explaining how imperative it is to have governments exercise political will to carry out the vaccinations, Martin said it is the Rotarians, the 1.23 million volunteer leaders, who can be the best advocates.

“I need each of you to continue to advocate and engage with your political leaders and key individuals with your strong, influential Rotary voice and passion, so that all of our stakeholders will continue to commit to funding the final steps of polio,” she said.

Rotary has contributed more than $1.5 billion to immunize more than 2.5 billion children in 122 countries, including some $14.6 million from Korean Rotary clubs.

The Bill & Melinda Gates Foundation matches each dollar donated by Rotary two-to-one, up to $35 million a year through 2018. Donor governments have contributed more than $7.2 billion to the project.

Martin warned Rotarians not to be complacent with their achievements on the frontlines of battling polio. According to the immunization expert, it’s all or nothing.

“If we don’t achieve eradication, we can quickly see cases come back,” she said. “Through modeling estimates we figured it’s about 100,000 to 150,000 cases a year that could come back if we don’t keep our level of protection now through our campaigns.