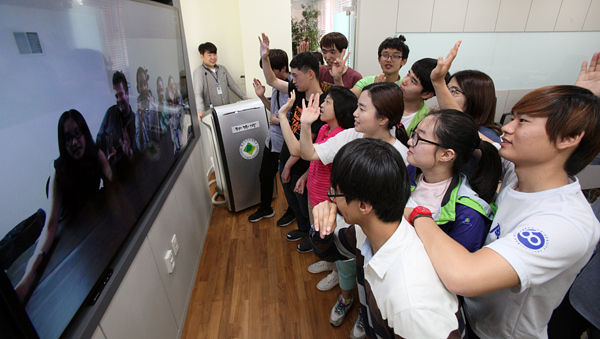 On a recent morning at the start of a school day, 11 students sat around an 100-inch monitor connected to a computer, webcam and microphone in room 1304 of Daegu University’s cyber college in Gyeongsan, North Gyeongsang. The atmosphere was nervous. They were about to have a blind date with a group of American students thousands of kilometers away via video link.

The Korean students student at K- PACE Center, an educational institute for people with developmental disabilities. The developmental level of the students in the group was similar to first or second grade students.

The American students study at the Maplebrook School, located in Amenia, New York, which also teaches students with learning disabilities.

The K-PACE Center, an acronym for ‘Professional Assistant Center for Education,’ was established in 2011 to prepare students with developmental disorders to live independently. There are currently 47 students studying in the center and residing in the center’s dorm.

“Students of your age from the United States will appear soon on the monitor,” said Hwang Chang-ha, 48, a K-PACE administrator. “Let’s talk to them in English as we practiced.”

“Hello, Hi!” greeted one of the Korean students.

“I have many things to say about the topic,” said a student in New York.

One of the Korean students, Geum Dong-hun, 20, became confused by the English word esteem. “What? East?” he said. He realized his mistake and corrected himself: “Mistake very, no, no, many.”

It was the first video chat between the students and it went on for about 40 minutes. The Koreans tried their best to say something relevant to the topic, despite their unsophisticated English vocabularies.

“Students with developmental disorders learning English is similar to little children learning a new language,” said Johnson. “Sometimes, their English pronunciation is better than other kids their age because they say a word exactly the way they learned it.”

The real-time video chat was planned last April when Kim Wha-soo, 55, the head of K-PACE, visited Maplebrook School to study its educational programs. She met with Jennifer Scully, the school’s dean of admission, and they agreed to hold the online chat to teach the students about different cultures and perspectives.

“Although I was very worried, the class was very successful,” said Kim. “The students will be video chatting with different students in the United States once every two weeks in English.”