Lotte’s latest crisis is its biggest

Lotte’s latest crisis is its biggest 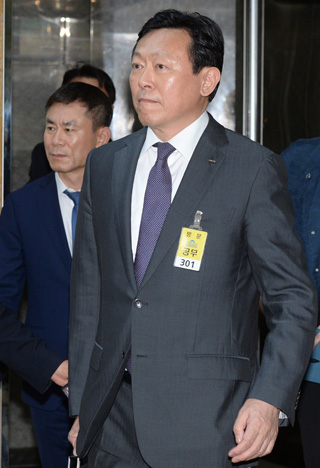 Lotte Group faced the biggest crisis in its history as prosecutors investigate it for shady practices, and a number of impending projects - including a corporate governance restructuring - may be at risk.

Major projects by the group, including an initial public offering (IPO) of its hotel unit, the acquisition of an American chemical firm and the regaining of a license to operated a duty free mall at Lotte World Tower in Jamsil, southern Seoul, are on the brink of falling apart as the retail and confectionery giant is investigated in a kind of probe it has never faced since its start in 1967.

Prosecutors raided the headquarters and 17 major offices of Korea’s fifth largest conglomerate in Seoul Friday to seize proof of the group’s maintaining of illegal slush funds and possible embezzlement.

The investigation comes 11 months after two sons of 93-year-old Lotte Founder and current general chairman Shin Kyuk-ho began a high-profile war over control of the group.

Lotte Group Chairman Shin Dong-bin, the second son of the founder, is currently on a business trip to Mexico and the United States. He is “feeling grave responsibilities and will clarify any suspicions,” a key aide told the JoongAng Ilbo on Sunday.

The chairman is considering appearing at the prosecutors’ office to offer explanations. He was scheduled to come back to Seoul Thursday.

Dong-joo, the founder’s eldest son and ousted vice chairman of Lotte Holdings in Japan, is expected to propose dismissal of his brother Dong-bin at a shareholders meeting in Tokyo at the end of this month. Dong-joo has incessantly been looking for a way to take back control of the chaebol, publicly criticizing his younger brother and using verbal testimonials from his father, who is suspected to be suffering from Alzheimer’s disease.

“I heard from the Korean press that Lotte Group is under prosecutors’ investigation on accusations of creating slush funds,” said Shin Dong-joo on Friday in a statement posted on a homepage (http://www.l-seijouka.com) of a group of his supporters. “Problems of the current management system centering on Shin Dong-bin, who ousted me, are being newly exposed.”

In March, Dong-joo and his supporters attempted to remove Dong-bin from the board of Lotte Holdings, a de facto holding company of Japan’s Lotte business, but failed. Shareholders voted in favor of Dong-bin and he solidified his control over the confectionery giant in the eight-month inheritance battle with his older brother.

The target of the investigation is the group’s policy headquarters, known within the group as the “brain of Shin Dong-bin.” About 200 executives and employees including figures soon to be questioned worked in the headquarters since 2004 and controlled the entire group.

The group has been focusing its efforts to get re-approval from the government to maintain operations of the duty-free mall at the 123-story Lotte World Tower, whose license is set to end on June 30. Lotte was going to apply for government licenses for four new duty-free businesses by the end of this year.

The hotel unit was supposed to be publicly listed in a major IPO, but that has been pushed back to July 15 from June 29 and scaled down to 5.3 trillion won ($4.5 billion) from 5.7 trillion won amid the ongoing bribery case.

Several weeks ago, prosecutors raided Lotte’s duty-free departments and the home of Shin Young-ja on allegations that she was bribed by the CEO of Nature Republic, a cosmetics maker, in exchange for putting its cosmetic shops in Lotte’s duty-free stores.

If Lotte loses the duty-free license, the group is going to face an estimated 500 billion won decrease in annual sales.

“The IPO of the hotel was going to be an important change in the governance structure of the entire group,” said an anonymous source at the group. “It has been a major reform plan for the group since the family squabble last year, but now it is facing a big obstacle.”

The chemical unit of the group is also being given a red light.

Two weeks ago, the company made an offer to acquire the $1.6 billion Atlanta-based chemical company as it seeks to build on its takeover of Samsung Group’s chemicals arm. The two formed a joint venture last year to build a plant for making ethylene in the United States, with an aim to start production in 2018.

“We concluded that the group is in such a grave situation that it will be too burdensome to proceed with the bidding,” said Huh Soo-young, CEO of Lotte Chemical in a press release.