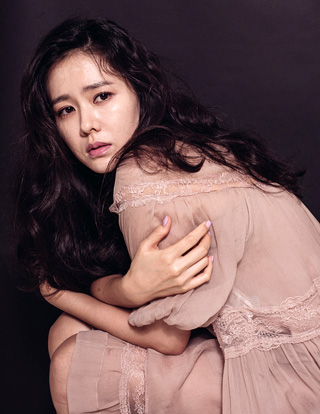 Actress Son Ye-jin has always been a byword for innocence. She’s appeared in many romance films, portrayed as a pure and innocent female lead, which seemed to be the perfect fit for her. But through her more recent films like “The Pirates” (2014), where she appeared as a daring and pert female pirate Yeo-wol, she’s proved that she has more faces beneath that innocent smile.

In her latest film “The Truth Beneath” that hits screens nationwide Thursday, Son reveals some unfamiliar faces that audiences are sure to find refreshing. This mystery thriller film is female director Lee Kyoung-mi’s second feature and comes in eight years after her award-winning debut “Crush and Blush.”

“The Truth Beneath” revolves around the character Yeon-hong, played by Son, a young and beautiful mother who suddenly turns into a desperate mother who tirelessly goes out searching for her daughter Min-jin, who goes missing on the first day of her husband’s election campaign. Kim Joo-hyuk plays the role of Jong-chan, the husband who is a broadcaster who jumps into politics.

For this single 33-year-old actress who is unfamiliar with the “mother” role, Yeon-hong, according to the actress, playing a character who goes out of her mind looking for her missing daughter was outside of her comfort zone. But Son pulls the role off perfectly. Despite her elegance, she showed madness in her eyes, speaking in such a deep range she’s never revealed before. 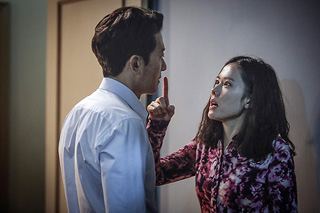 Son Ye-jin, right, discloses her new sides in the role of Yeon-hong, an enraged mother looking for her missing teenage daughter.[CJ ENTERTAINMENT]

“I didn’t even know I had such a deep manly voice in me,” said Son. “When I watched the film, I was quite surprised to see such new sides of me that I’ve never seen before. It was fun.”

To hear more about Son’s latest film “The Truth Beneath,” Ilgan Sports, an affiliate of the Korea JoongAng Daily recently sat down with the actress for an interview. Here are some edited excerpts:

Q. It must have been really unfamiliar for you to play this role as the character not only has a teenage daughter who has entered the rebellious phase in her life but she even goes missing. Did you have to use a lot of your imagination?

A. During the filming, I always had to think: “How would I feel if I was in that situation?” Yeon-hong is not the typical Korean mother we know. Therefore, there were a lot of talks regarding the behaviors and feelings she shows after finding out that her daughter is missing and trying to find the traces to her daughter on her own. There was one of the staff members who has a teenage daughter so I talked to her a lot about what it would be like if she suddenly went missing. I think I learned a lot about having a teenage daughter and having that mother’s intrinsic love but also complex feelings toward a daughter who becomes more and more rebellious toward you and finding out all the secrets of your daughter you never knew about… I guess as a mother, you’ll develop feelings of love and hatred toward your daughter.

The scenes when Yeon-hong starts to lose her mind and shows madness were especially impressive. How was it for you?

When I monitored the scenes as I was shooting, I was really curious as to how the audiences would accept it. My heart fluttered in excitement as it’s such a new me, but at the same time, I was quite afraid too. Personally, I enjoyed looking at the new and unfamiliar faces of me. I’ve done a lot of films so far and I guess I tried to show different sides of me in the diverse characters I’ve played, but I think my real facial expressions, real way of talking and my tones and things like that were somewhat ingrained into the characters. In that sense, this film has been very new and it brought a lot of new me.

In the film, there’s a scene where you slap your husband Jong-chan’s (played by Kim) face three times in a row. How did that go?

I wanted to do it in one go but we had to shoot the scene twice. My hand really hurt when I hit him so it must have been really painful for Kim to bear that. So far, I haven’t really been in a situation in my real life where I had to slap a person like that. So I didn’t have the technique or the knowhow of slapping. I just used my power and full swing and I guess it really hurt both me and him. After the slapping, I spat on his face and that was spontaneously added during the shooting.

Just by looking at the storyline, “The Truth Beneath” doesn’t seem like a commercial film that was made to be a box-office hit.

Well, if you compare it to my previous works, it’s not an outspoken commercial film. When I was reading the screenplay, I didn’t think it could be loved by people of all ages or understood by everyone. But at the same time, it’s not a film that’s only geared toward a certain group of people who are into this kind of films. I didn’t decide to appear in it thinking it will attract more than 10 million viewers or something, but I believe it still has a lot of aspects that people can sympathize with.

It’s been quite some time since you appeared in romantic comedies or melodrama films. Did you deliberately avoid them?

There were no changes to the way I select my works but I did have strong desires in recent years to challenge myself and try something new. Moreover, there are not many screenplays these days on such genres. If there are, many of them are focused on the male leads so I just didn’t have an option to choose from.

Do you ever think about taking part in producing a film?

If I have a chance, I want to participate in writing screenplays or in the planning stage. I don’t have the ability to write the whole screenplay by myself but by working together with a professional playwright, I always wanted to have a go. I heard many actors and actresses are participating in the production and learning a lot about filming that way. If I get the chance, I want to develop a story around a character who is living in the lowest point in his or her life, in the gutters.

You’ve been appearing in films without a break, haven’t you?

Before, I just wanted to be a good actress. So I couldn’t stop acting. But the more I was eager to be better, it didn’t really work out. While I was acting, I was still thirsty to act. I think it was a problem coming from within and wanted to take a rest. But then, I found myself reading another screenplay. I guess I am not up for taking a break at the moment. I’m actually afraid of thinking about the time when I want to have a break. At this moment, I just want to continue what I’m doing and do as diverse films as possible.

Do you have a genre or a character you want to go for?

I don’t think I can ever do horror movies. These days, I am into a drama “Dear My Friends” on tvN and I just get mesmerized by the acting skills of the veteran actresses there. When I’m their age, I want to be able to act like that. I talk to my close colleague actresses a lot in my age group and we’ve said, “Let’s film such a work together in 30 years.”