School teaches retirees to be farmers

School teaches retirees to be farmers 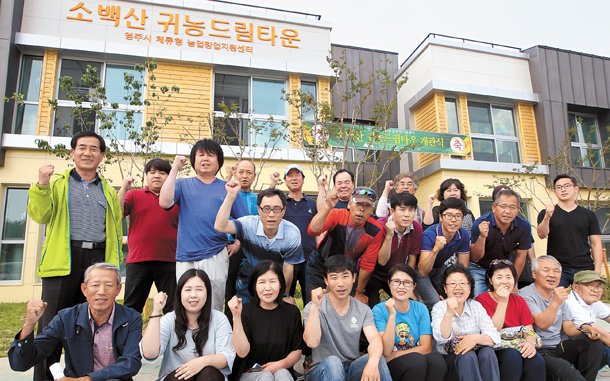 The first students to enroll in a school that teaches farming to retirees from urban areas pose in front of their dormitory in Yeongju, North Gyeongsang. [GONG JEONG-SIK]

The school is entirely different from already existing programs, which only allow retirees to stay a few days at farming houses to learn the necessary techniques.

Yeongju is a popular destination for retirees hoping to start a new life through farming. Some 600 people from 359 households moved to the city after retiring from their work in the cities in 2015.

At the opening ceremony, the first 25 people to study at the school celebrated their enrollment. One couple, Kim Dong-un, 44, and Choi Jin-mi, 42, sat down with the JoongAng Ilbo for an interview.

Kim worked for the Lotte Group, Korea’s fifth-largest conglomerate, for the last 20 years.

While Kim was based in Indonesia for about four years, he grew familiar with the wide range of tropical fruits there and became interested in farming.

Kim decided to come to Yeongju because he found the city to be the best place to farm while he was attending an exposition in Seoul for retirees who want to be farmers.

He also came to examine the city by taking part in a four-day field trip. And whenever he heads to his hometown Uljin, he passes by Yeongju.

“I had no place to go while I made preparations to start farming,” said Kim, “but the place is the most optimal institution for me.”

Choi, his wife, also quit her nursing job in May to take up farming with her husband. Their daughter is already financially independent and the couple recently sold their house, leaving them with little reason to stay in Seoul. They plan on first growing apples and ginseng and then a greater variety of crops including tropical fruits.

It also offers different curricula including a weeklong course, a three-month course and a 10-month course. The dormitories are also equipped with single rooms as well as larger ones for married couples. There are a total of 30 rooms and they all have refrigerators, washing machines and air conditioners.

The students mostly learn practical agricultural skills such as how to make and manage fertilizers, cultivate farmland and use farming machines. The school also owns small parcels of land where students can practice growing different crops.

The students were also paired up with senior farmers who grow the crops they are interested in growing themselves. They visited their mentor’s farms and also went to historic places such as Buseok Temple.

During the entrance ceremony, Lee Cheol-hee, 58, who started farming some four years ago and now heads an association of some 400 farming retirees, promised to help out the school.

Yeongju City Government, after opening the agricultural school, started promoting the school to conglomerates by promising that it will help retirees who want to work in agriculture settle in the city.

The city office has already signed a memorandum of understanding with Samsung SDI and will soon educate 40 workers from the company. It also contacted KT Company, Ssangyong Motor and Korea Broadcasting System’s training centers.

“Thanks to Yeongju’s gifted natural environment,” said Jang Wook-hyun, the mayor of the city, “farmers can make a lot of profit by growing apples and ginseng.”