The Test of English for International Communication (Toeic), one of the most widely taken English proficiency exams in Korea, was first introduced in 1979. Today, nearly 2 million people take the test in Korea every year.

As more people become familiar with the test and as technology develops, the ways students prepare for the exam have been changing as well.

Many colleges require students to receive a certain grade on the test to graduate and companies require applicants to submit the results of foreign language exams.

Youth Community Union, a labor union for young workers in Korea, said local college students attending a four-year college take the Toeic exam an average of nine times while they are in school. 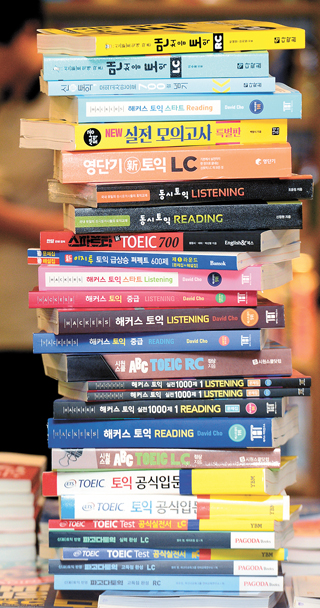 According to Incruit, Korea’s major job information portal, 30.3 percent of 946 survey respondents said they are spending too much money on the Toeic.

They said the tests help only those who teach or publish study guides; another 20.2 percent said they are not sure the Toeic will help them land jobs.

It’s not just local Koreans who studied here who are struggling with the Toeic.

“I have taken the exam twice this year in order to get the best score to submit my resume to companies,” said a 28-year-old man surnamed Yoon.

Yoon graduated college in the United States about four years ago and has been looking for a job since. “I am not getting a satisfying score so I have been attending private institutions to prepare for the Toeic. When I am at the institution, I don’t tell my peers or teachers that I went to school in the United States because my score is lower than those who only studied in Korea.”

In fact, more people are finding other ways to study the Toeic rather than attending private institutions or studying workbooks alone at home, largely thanks to developments in technology.

“Private institutions cost some 300,000 won [$262] a month, which I think is little bit too much for a job seeker,” Yoon said. “I am going to stop going to the institution next month and will study online.”

The cost of online courses is often cheaper than brick-and-mortar institutions.

As more people choose to study alone to prepare for the test, major private institutions have launched their own online courses. Online courses cost about half that of offline courses.

Additionally, not only are private institutions focusing on foreign language proficiency tests, technology firms are releasing mobile apps or other computer software that help people study for the test.

Riiid, a start-up, recently launched a mobile app that allows people to take Toeic tests through their smartphones.

The app analyzes its subscribers’ weaknesses and strengths. Victrony, another start-up, offers a similar educational platform through mobile app. Some mobile apps provide a list of commonly used words for the Toeic so the users can memorize them on the go.

Outside of the app market, there are timers specifically designed for Toeic exams that help test takers use their time more efficiently.

The new products are crucial as a new edition of Toeic was introduced last month. It was the first revision in 10 years.

The test’s reading sections were lengthened and more English accents were introduced in the listening portion. Some say the test has become more difficult and that many of students will have harder time adapting if they studied for the previous edition.