Many young Koreans have taken or studied for an English proficiency test. And the Test of English for International Communication, or Toeic, is one of the most popular or essential exams for college students and job seekers in Korea to graduate and to meet job requirements.

Riiid, an educational technology start-up established in 2014, has been providing new educational platforms for the Toeic test via mobile apps. The company successfully launched a free mobile app called “Santa for Toeic!” in January and there already are more than 100,000 subscribers, according to Riiid.

Now the company plans to enter neighboring Asian markets including Japan and China, where demand for the Toeic exam also is high.

The app allows Toeic students to solve sample test problems on their smartphones. Not only does it provide reading and grammar questions, the app also analyzes students’ habits including their strengths and weaknesses to target areas of improvement.

For example, the app scores subscribers’ ability to use adjectives, adverbs, or verbs correctly and rank each skill accordingly.

At the company’s office in Gangnam District last week, about 10 young employees stared intently at their computer monitors.

On one wall a posted sign read “Creative Destruction” in Chinese characters. Jang Young-jun, CEO of Riiid, has been developing a new educational platform that might actually alter the way many students have been studying for various exams, including the Toeic. And the 30-year-old was confident about his technology that analyzes students’ habits.

“Machines or artificial intelligence [AI] will always be a better teacher than a human being, at least when it comes to helping students preparing for tests that have multiple choice questions,” Jang said. “Humans always make mistakes and they are meant to be that way, but machines are different. 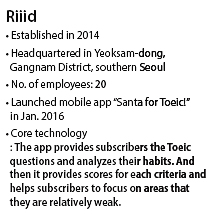 “Machines can analyze students’ habits and can come up with what students really need to work on, while humans are not able to do that. Machines are more objective and warm-hearted. They can teach humans without hurting anyone’s feeling.”

According to Riiid, 2,500 subscribers who have solved more than 500 problems through its app saw their score rise by 31 percent on average. Those who scored poorly on the app’s initial assessment test saw their score increase an average of 92 percent. The company said the app can predict which questions students will get wrong and which wrong answer they will choose by 90 percent of the time.

“We are providing the app for free since we believe that we are still collecting data from our subscribers,” Jang said. “Once we collect enough data we will be able to give the best directions to subscribers to focus on parts where they are relatively weak and allow them not to waste their time solving questions that they don’t have problems with.”

Jang was confident that his app will become something similar to AlphaGo, a Go-playing artificial intelligence algorithm. “AlphaGo collected enormous data of Go matches, and what we are doing is similar to it,” Jang added.

The company started off with the Toeic exam but is planning to expand its platform to the Chinese College English Test (CET), taken by 20 million Chinese students every year, and other popular English proficiency tests as well.

The reason Riiid chose Toeic as the first project was simple enough.

Many people are interested in the test and those who are studying for it tend to be a younger population that has access to smartphones.

“We did think about making the app for people studying for Korea’s college entrance exam but later decided to go for the Toeic one,” Jang said.

“Many high school students do not have constant access to their phones due to their parents, while Toeic takers tend to be college students or office workers and they have lots of other things to do in their ordinary lives so they always have mobile phones with them. Toeic is a huge market here in Korea.”

According to the company, Monday and Tuesday are the most popular days for subscribers to use the app, and the app is least used on Sundays. Users sign in most from 6 p.m. to midnight, which suggests that users are either working or attending school during the day and use the app after work.

The company is still collecting data on demographics, but it said it appears that the app is most popular among third- and fourth-year college students. Additionally, the company said subscribers had higher chance of getting questions related to adjectives wrong, followed by verb tenses and prepositions.

Riiid hopes to provide the app in Chinese and Japanese as well. The market size of Toeic is 150 percent bigger in Japan compared to Korea, according to the company.

“Investors thought highly of our potential to grow,” said Jang. “Creating a mobile app or certain content or how well one creates it is not a surprising technology anymore. Investors look for the technology that can substitute something that currently exists completely.”

In fact, Jang said he wants to change the current education platform for all students. “There haven’t been enough successful results to share as of now but we believe there are hopeful results coming up,” Jang said.

When asked why he named the app “Santa,” Jang said the app is similar to St. Nick’s mission. “Santa Claus watches out who is doing good or bad and personally gives presents to those who have worked hard, which is something that we are trying to do as well. We named our server Santa as well.”

Jang, who studied at the University of California Berkeley’s Hass School of Business, worked for Merrill Lynch for three years.