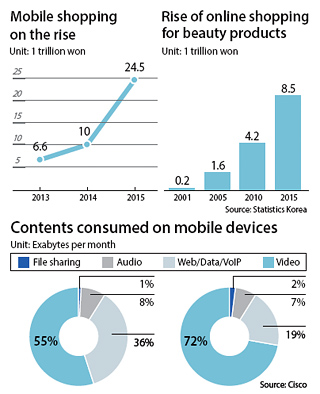 Korea’s first online shopping business launched in 1996, but it wasn’t until the 2000s that the concept of buying products online really gained momentum.

Even coming late to the game, Korea’s e-commerce operators have caught up fast, specifically in the industry of selling beauty products. Some have been so successful that they are looking to overseas markets.

Industry analysts say the move was possible because the global recognition of K-beauty, as the industry is nicknamed, gave it a major boost. And the fact that cosmetics are the kind of products that women like to buy online helped beauty-oriented start-ups.

With well-known K-beauty brands such as AmorePacific or LG Household & Health Care, along with others that are less well known even in Korea, online retailers have been attracting customers around the world with extremely cheap prices and unique concepts.

According to statistics released by the government in June, cosmetics and fashion items comprised the second-most popular category of online purchases after trip reservations, and the sales volume increased from 200 billion won ($175.7 million) in 2001 to 8.5 trillion won in 2015.

A good example is Memebox, a start-up founded in 2012 in Seoul that is now based in San Francisco. As of last year, the company raised investment from third parties of more than $29.35 million.

Memebox distinct concept was curating makeup products for customers under certain themes, such as “summer vacation” or “cozy winter.” The customers don’t know what they’re ordering until a box is delivered to their doors.

Other similar e-commerce shops specializing in beauty have launched.

Mugoonghwa provides an internet version of home shopping. When a user logs in at a certain time slot, he or she can watch show hosts selling diverse beauty products and purchases can be made right away.

According to a report issued by the Korea Trade-Investment Promotion Agency in September, the greatest amount of data used by mobile device owners is on watching video: it takes up 55 percent of data usage, far more than other functions such as file sharing or web browsing.

Video’s share is expected to increase to 72 percent by 2019. The frequent use of YouTube to introduce new cosmetics items partially explains why video could have an even bigger influence on customers in the future.

Meanwhile, Korea has become one of the most active e-commerce markets worldwide. With estimated sales of $36.7 billion in 2015, according to data compiled by U.S. -based research firm eMarketer last year, it is the seventh-largest retail e-commerce market.