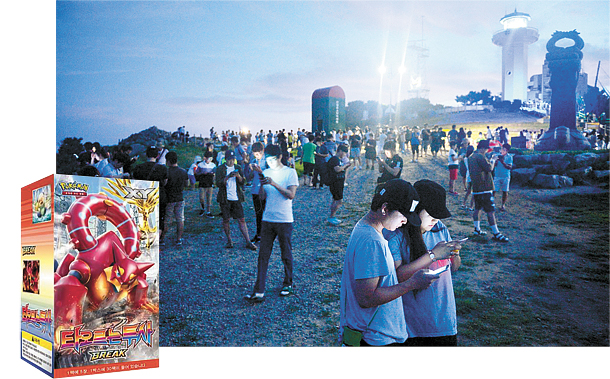 Top: Korean gamers flock to Ganjeolgot in the southeastern city of Ulsan, the latest location to offer Pokemon Go service, over the weekend. Although the wildly popular augmented-reality smartphone game has not officially launched in Korea, certain locations in far corners of the country have access to the game’s signal. Left: The latest deck of Pokemon trading cards, a product that predates the Pokemon Go smartphone game, launches in the Korean market on Wednesday [NEWSIS, LOTTE MART]

Pokemon Go, Nintendo’s wildly popular augmented-reality smartphone game, is still not officially available in Korea, but the recent discovery of certain regions with working service for the app has led local hotels and retailers to cater their marketing toward ardent fans flocking to far corners of the country to play the mobile game.

The branch of Shilla Stay, a business hotel affiliated with Hotel Shilla, in the southeastern city of Ulsan said Monday that it will start providing a special package with pocket Wi-Fi and supplementary battery devices for guests, after gamers discovered the local tourist destination of Ganjeolgot inexplicably had Pokemon Go access.

Ganjeolgot is a cape located on the coast of Ulsan. It is mostly known for offering views of the first sunrise in Korea, but ever since Friday, it has also become known as the latest hot-spot for Pokemon Go players. After news of the game’s availability went viral on social media, the number of tourists over the weekend exploded to 10,000, compared to an average weekend number of 1,000 visitors.

“As part of a collaboration with the local tourism industry, Shilla Stay is presenting a Pokemon Go-related promotion for the first time as a hotel operator,” a Shilla Stay spokesperson said. “This promotion will provide convenience to Ulsan visitors who have come here to enjoy the highly popular mobile game.”

The hotel chain will provide a one-day voucher that can be used at any branch nationwide to a select number of people who upload pictures of themselves staying at the business hotel in Ulsan or playing Pokemon Go at Ganjeolgot. For guests who catch more than 20 Pokemon, the hotel will provide a stuffed animal as a prize.

The promotion will start today and run through Aug. 15. The Ulsan branch of Shilla Stay said it will also provide a shuttle bus once a day to Ganjeolgot.

The Pokemon Go craze has even led the Ulsan Metropolitan City government to form a special planning committee to install Wi-Fi booths and charging stations near the Ganjeolgot cape for the convenience of tourists visiting just to play the game.

In the southeastern city of Busan, where certain areas also have Pokemon Go access, the Haeundae Grand Hotel on Thursday announced a partnership with Pokemon Korea.

It decorated the interior of three ocean-view rooms with Pokemon characters and installed a photo zone with massive Pokemon dolls in the lobby. The hotel’s lounge restaurant is offering themed menu items such as a “Pikachu Cheeseburger.”

The website will have 11 of the company’s own original characters randomly appear on the page, and any visitor who “catches” more than six gets a chance to participate in the retailer’s giveaway event. The first person to catch all 11 characters wins a tour package from 11st worth 1.5 million won ($1,300).

Runner-ups who catch more than six are eligible for other tour-related items from the online retailer, which includes a round-trip bus ticket to the northeastern city of Sokcho in Gangwon, the first location in Korea found to have Pokemon Go access.