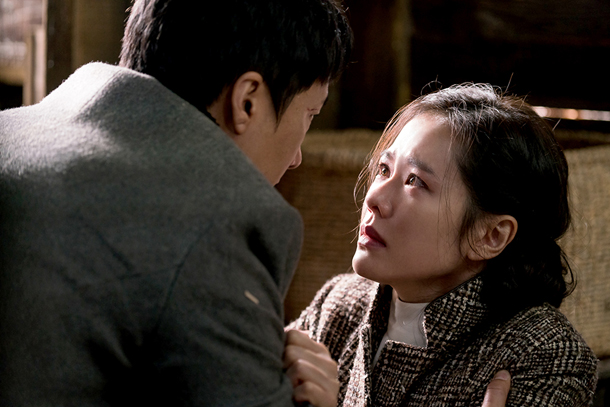 Son Ye-jin, one of the country’s most prolific actresses, plays Princess Deokhye, the doomed last princess of the Korean Empire (1897-1910). [LOTTE ENTERTAINMENT]

Period films are rarely free from criticism. Sometimes, there’s just too much history to fully cover in a two-hour runtime, and screenwriters or directors are often accused of taking liberty with events to maximize drama.

The upcoming Korean film “The Last Princess,” based on the true, tragic story of Princess Deokhye (1912-1989), tries to take it safe by notifying audiences early on that it’s a “sheer creation based on true stories.” Indeed, the film itself is actually based on the novel “Princess Deokhye” by Kwon Bi-young.

The film stars Son Ye-jin, one of the country’s most prolific actresses, and it traces the life of the last princess of the Korean Empire (1897-1910), also known as the Daehan Empire.

Her life - though not the film itself - begins with a carefree childhood as the beloved daughter of King Gojong (1852-1919). He was the last king of the Joseon Dynasty (1392-1910) and the first emperor of the Daehan Empire, who ultimately was forced to abdicate his throne by Japan.

Although the film says it is a work of fiction based on true stories, major incidents in the princess’ life are portrayed well throughout the film.

After her father is poisoned to death, she’s forced to live in Japan under strict surveillance at the age of 14. She is arranged to marry a Japanese man and the two have a daughter, but their child goes missing after leaving a suicide note. The princess and her husband get divorced, and she begins to struggle with schizophrenia, which leads to a stay at a mental hospital.

Her country regains sovereignty from Japan, but the Syngman Rhee government does not permit royal family members, including the princess, to return from Japan, fearing they might affect the government’s control.

The princess finally comes home with the aid of a newspaper reporter in 1962 after several attempts. She’s 51 years old when she touches down.

The milestones are well-covered by director Hur Jin-ho, who also wrote the script, but he does take some creative licenses.

For example, the newspaper reporter who helped Princess Deokhye return, Kim Jang-han (played by Park Hae-il), becomes a long-time friend in the film, even though there’s no evidence to suggest this was so.

Princess Deokhye is also portrayed as an empowered, strong woman, rather than the insecure introvert she was in real life.

Hur’s imagination goes too far in a few scenes, but the film delivers many emotional moments in calm and measured ways, which is one of the director’s strengths. His past films like “Christmas in August” (1998) and “One Fine Spring Day” (2001) featured characters who rarely cried, but rather tried to hold in their feelings.

This lead’s Hur to focus on Son’s expressive eyes, which becomes a bit much in some scenes. Still, Son proves that she’s more than just a pretty face with her expert approach to the complex character.

Park is also well cast as the reporter. The character may look unrealistic in some ways - he’s a Japanese soldier who fights for Korean independence, only to turn to journalism - but Park’s presence adds depth and layers to a story that walks the fine line between fiction and non-fiction.

Some period films might feel like dull documentaries, but the narrative here is interesting enough to hold the audience’s interest from beginning to end. The film frequently jumps from one time period to another, but the moves manage not to distract from the story. The film’s biggest virtue, however, is the way it brings a doomed princess of the past to the present and makes audiences want to know more about her.

“The Last Princess” opens on Wednesday at theaters nationwide. It is rated 12 and over.