‘The Age of Shadows’ is a beautiful spy adventure; Colonial era thriller keeps viewers on the edge of their seats

‘The Age of Shadows’ is a beautiful spy adventure; Colonial era thriller keeps viewers on the edge of their seats 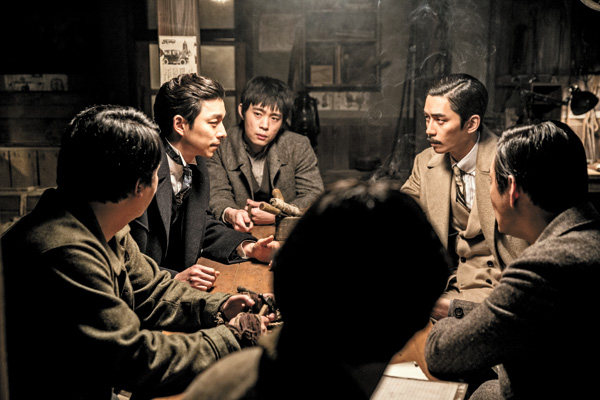 “The Age of Shadows” by director Kim Jee-woon is probably the most stylish film ever set in the late 1920s when the country was under Japanese colonial rule (1910-1945). Gong Yoo, second from left, plays the lead role of Kim Woo-jin.[WARNER BROS KOREA]

In almost all Korean films set during the time of Japanese colonial rule (1910-1945), only two groups of people exist: the good and the bad.

The good guys fight for the independence of the country while the bad guys work closely with the Japanese government.

But the film “The Age of Shadows” by Kim Jee-woon approaches the era by featuring Lee Jeong-chul (played by Song Kang-ho), a complex character who once worked for the independence of his home country but now pledges loyalty to the Japanese by working as a police officer who brings his former colleagues to court.

The two protagonists of “The Age of Shadows,” Lee and Kim Woo-jin (played by Gong Yoo), are based on Hwang Ok and Kim Si-hyun, both independence fighters at the time.

Lee one day realizes Korean resistance fighters are making bombs in Shanghai and that they plan to smuggle them to Gyeongseong, a name for Seoul during Japanese colonial rule, to destroy major buildings and attack key figures in the imperial Japanese army. Lee decides to approach Kim, a close aid of Jeong Chae-san (played by Lee Byung-hun), the head of the independence movement.

Lee attempts to obtain key information from Kim about the bombs but instead he is asked to become miljeong or a secret agent, so that the resistance fighters would be able to successfully land in Gyeongseong with the bombs.

The independent fighters manage to get on a train to Gyeongseong but the confidential information about their route is leaked to the Japanese police. It is then that they realize there is miljeong inside the group.

“The Age of Shadows” overwhelms the audience from its very opening scene.

A throng of Japanese police officers run over roofs racing to catch a Korean independent fighter. The stark contrast between the modern uniforms of Japanese police officers and the beauty of old giwa, Korean traditional roof tiles, under the moon light is a sign that this is going to be another stylish film from director Kim, who took the helm of many hit films including “I Saw the Devil” (2010), “The Good, The Bad, The Weird” (2008) and “A Tale of Two Sisters” (2003).

In terms of cinematography, Kim is second to none and he doesn’t disappoint his long-time fans. There are heaps of films that are set in the late 1920s, but none of them portray the people of the era, when traditional Korean culture and the modern culture of Japan mixed, in the sophisticated and classic way that Kim does.

Kim’s newest work also reminds viewers that film is a comprehensive art form which includes music and visual art. The film’s sets and score are stunning to the eyes and ears over the course of the film’s 140-minute run time.

In the director’s notes, Kim wrote that he found himself attracted to the spy film genre and wanted to portray the identity crisis of a double agent.

“The Age of Shadows” is a good espionage film as it keeps the audience sitting at the edge of their seats throughout the whole film waiting to find out who the secret agent is.

But the visually exciting film lacks depth and plausibility when it explains the changes that lead character Jeong-chul goes through.

The film also fails to make the best use of some supporting characters such as actress Han Ji-min who plays one of the resistance fighters. Her character, Yeon Gye-sun, seems to have an interesting story, but it never gets explored, leaving much to the imagination.

Still, the performance of the star-studded cast make up for some of the weaker points.

Song proves that he is a natural, who can easily switch between comedy and tragedy.

The film opens on Wednesday at theaters nationwide. It is rated 15 and over.