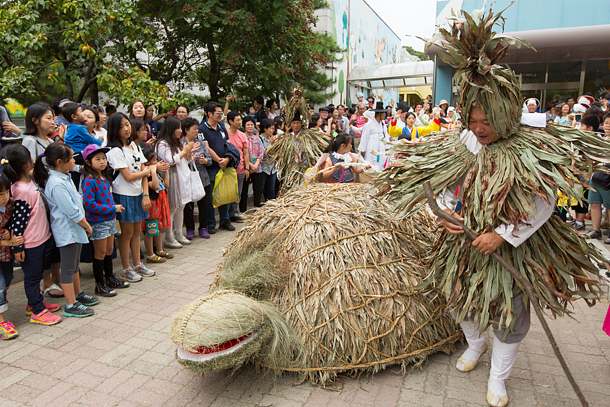 Actors demonstrating a traditional folk game pretend to be a turtle at Gyeongbok Palace in central Seoul. [NATIONAL FOLK MUSEUM OF KOREA]

With the Chuseok holiday right around the corner, a variety of ways to celebrate the four-day harvest festival are available. It appears more and more Koreans today are straying away from the more traditional methods associated with the festivities, such as eating and enjoying traditional homemade dishes with family members, and resorting to different sources of entertainment.

Flight tickets to popular destinations like Jeju, for instance, have been booked and bustling airports are becoming common during Chuseok. Visits to the Korea Baseball Organization (KBO) League games are also becoming a favored way to spend the holiday. As this time of the year also marks the beginning of the mountain hiking season, mountains are another hot spot.

Besides these, there is an array of programs planned at various cultural institutions across Seoul and some other regions outside the capital. Here are a few activities for those looking for ways to indulge in cultural activities during the holiday.

To get into the Chuseok holiday spirit and the tradition it entails, the National Gugak Center is holding the “Hangawi Byeol Byeol Festival,” providing free performances and food to 900 people on Sept. 14 and 15 at 8 p.m in Seocho-dong in southern Seoul.

Tickets will be available on a first come, first served basis, and will be limited to 900 people per day. To book a ticket, or for more information, go to www.gugak.go.kr or call 02-580-3300.

The Deoksu Palace near City Hall Station in central Seoul is holding a special Chuseok event, as well. Families can appreciate special folk performances of traditional songs during the palace’s “Listen to Our Music at the Palace” event.

For three days starting on Sept. 16, between 7:30 and 8:30 p.m., families can see a rendition of “A New Wind Blows,” featuring “Oriental Express,” a singing group that consists of several veteran gugak (traditional Korean music) performers. 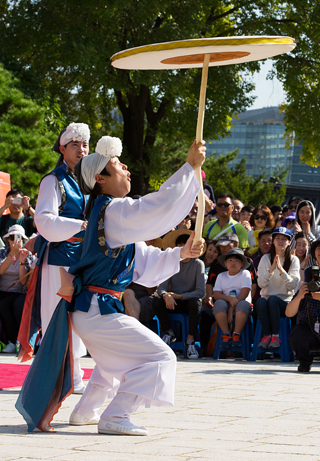 The National Museum of Korea in Yongsan District, central Seoul, is providing a different way for people to get a taste of the traditional Chuseok experience. In collaboration with twelve other national museums in Korea, hands-on activities and craft-making events will be offered for groups of friends or families to enjoy.

The National Museum of Korea itself is holding a namsadang nori folk dance performance, which involves male performers doing acrobatics, singing and dancing while dressed in colorful attire.

The namsadang nori performance is a truly wonderful display, portraying authentic Korean history and tradition, and has been added to Unesco’s Intangible Cultural Heritage of Humanity list.

The performance will be held at the museum’s open field on Sept. 15 in Yongsan, Seoul.

All of these activities can be experienced for free. To see an in-depth overview of each program, visit the museum’s homepage at www.museum.go.kr.

The National Folk Museum at Gyeongbok Palace in Seoul is offering a much more extensive way to truly become immersed in the activities associated with Chuseok.

From Sept. 14 through Sept. 18, the museum will be holding their 2016 Chuseok events involving arts and crafts, games, cooking, performances and more.

These activities are perfect for children, as well, and make for an ideal day trip for the entire family.

The activities range from making folk paintings for bags, origami, miniature clay-making, creating wooden instruments and more. Entrance for the activities will range from 4,000 won ($3.60) to 7,000 won, with activities starting at 10:30 a.m.

The museum will also prepare traditional folk-style games where families can compete against each other. These games include arm wrestling and relay racing, and parents and children can bring out their competitive side - all in good fun, of course.

But that’s not all that the National Folk Museum has prepared.

There are a total of 40 programs available in order for families to experience a wide variety of entertainment. For more information, go to www.nfm.go.kr and sign up in advance to gain entry.

For those looking for less traditional ways to spend the holidays with their family, the Asia Culture Center (ACC) is holding a special event called Dugeun Dugeun Culture Land. The program will offer a way to learn and understand other Asian cultures including Mongolia, India, China and Thailand through games and food.

For instance, the “Namaste, India!” portion of the program will let families take pictures with an elephant painting in a photo zone, play puzzle solving games, try on sari (traditional Indian clothing) and even taste lassi, a traditional Indian yogurt-based drink.

The ACC will also host performances and screen famous Asian animations twice a day. One of those will include a live dubbing show of “Love with an Alien” (1958), which is the oldest surviving color film in Korea.

The film is about a taboo romance between a Korean composer and a Hong Kong singer, and marks the first film collaboration between Korea and Hong Kong.

Families can visit for free during the Chuseok holiday from Sept. 14 through Sept. 16, and the museum will even be offering free parking for up to two hours. To discover what else the Asia Culture Center has to offer, visit www.acc.go.kr.

For those deciding to stay in Seoul, the Chuseok holiday marks a prime time to enjoy musical productions. One of those on offer during the week is “The Crying Undutiful Son,” a musical drama directed by Lee Jong-hun.

The production itself has some history behind it, as well. It was responsible for the revival of the musical drama genre when it was first performed in 1998, spawning a plethora of productions in the same genre. Then, 17 years later in 2015, the musical returned to an audience of 50,000 and will continue going strong this year.

“The Crying Undutiful Son” will be shown at the National Museum of Korea in Yongsan, Seoul, on Sept. 10. Tickets are on sale now.

The veteran Korean folk group C’est Si Bon, will be holding a concert during the holidays for those looking to enjoy some music. The 2016 “C’est Si Bon Friends” concert will be held at the Sejong Center Chamber Hall in Seoul on Sept. 18.

The concert will mark the group’s 50th anniversary and fans are hoping to hear some of their most classic and memorable songs.

Although the most well-known and outspoken member of the group, Cho Young-nam, will not be performing as part of the trio, he will be replaced by singer Lee Jang-hee, who had a long history with the group.

This will mark his first “C’est Si Bon Friends” concert. Joined by members Yoon Hyung-joo and Kim Se-hwan, the concert will surely be a memorable one.